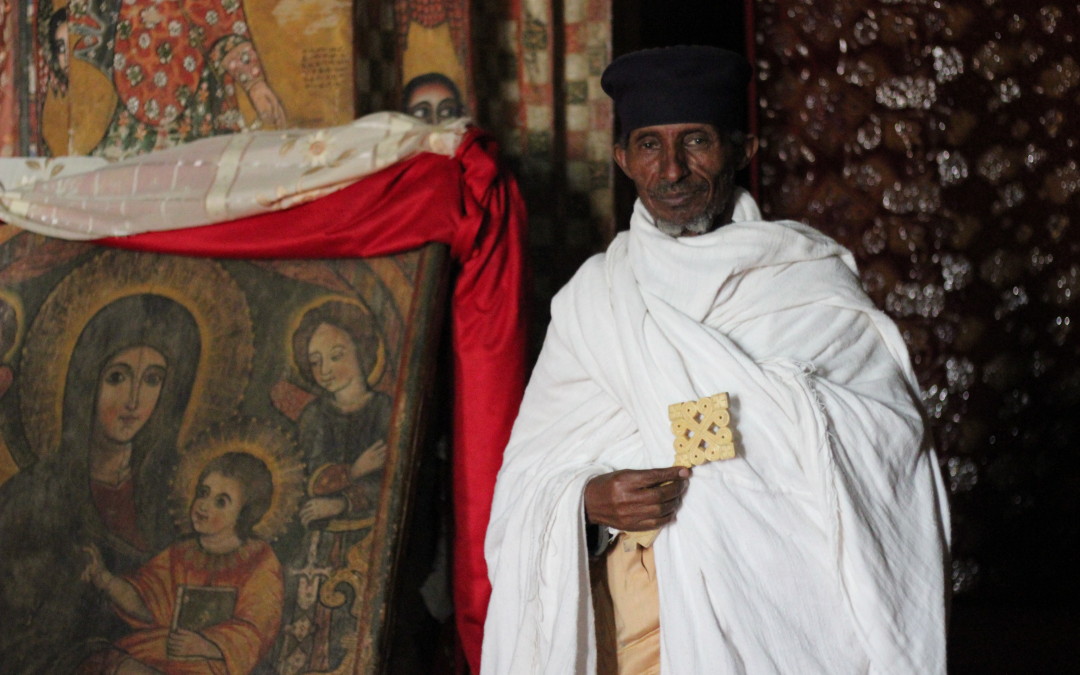 On this day died Saint Claudius, the martyr, a man with the appearance of the angels, a kinsman of kings, and a victor in battle.  This saint fought a good fight, and received an incorruptible crown of martyrdom in the kingdom of the heavens.  He rejected the glory of this fleeting world, and inherited that which is everlasting and unending, and the heavenly grace.  The father of this saint was the brother of Numerianus, Emperor of Rome, and his name was ‘Abtelmawos (Ptolemy), and the appearance of this saint was very goodly, like that of Joseph, the son of Jacob-Israel.  And he was mighty in battle, and he was applauded more than any other young man in Antioch; and he was beloved by everyone because of his strength and goodliness.  And because the people of Antioch lived him so greatly they painted a picture of him on the doors of the city, and they painted also pictures of his enemies fleeing vanquished before him.  And the saint read many of the Books of the Church.  And the Emperor of Rome heard the report of him, and he wrote to his father, and asked for him, and his father sent him to him.  When he arrived there the Emperor of Rome went out to meet him with his soldiers, and he and all the men of the city rejoiced in him.  And in those days a great war broke out with the men of Kuez (Khuzistan) and the men of Armenia, and Saint Clauidius marched against them, and conquered them, and he seized their king and broke them.  After this he returned to the city of Antioch, and he found that the Emperor Diocletian had denied our Lord Jesus Christ, and was worshipping idols.  And Claudius had a friend whose name was Victor, and he was the son of Hermanus, and they were reciting at all times words of the Holy Scripture, which were beneficial for the salvation of their souls; and they agreed together to shed their blood for the sake of the Name of our Lord Jesus Christ.  And Satan appeared unto them in the form of an old man, who pretended to be suffering grief, saying, “O my sons, ye goodly young men, the sons of emperors, I am afraid on your account, and I sorrow for you, I advise you to make friends with this infidel emperor, and to cast incense to his gods and idols; when he commandeth you to do this, do not transgress his command, but serve ye Christ in your houses, for this emperor is strong, and mighty, and merciless.”  And our Lord Jesus Christ made them to understand that he who was speaking to them was Satan, and the saints, said unto him, “O thou who art filled with all manner of evil, and who art the father of lies, get thee gone from us, for thou dost always oppose the path of God.”  And straightway the old man changed his appearance, and became like a black man, and he said unto them, “Behold, I will [go] before you to the emperor and make him to shed your blood.”  And Satan went to Diocletian, and said unto him, “If thou dost not kill Victor and Claudius they will rise up against thee, and kill thee, and take thy kingdom.”  Therefore did the emperor send to Saint Claudius, and call him, and he came to him; and the emperor asked him to cast incense to his idols, and promised to give him his father’s office, but Claudius neither accepted his promise, nor submitted to his order.  Now the emperor did not dare to speak to (i.e. threaten) Claudius in the city of Antioch, for Saint Claudius spake to him boldly and fearlessly and reviled him.  And Romanus advised Diocletian to send Saint Claudius to the country of Egypt, and to kill him there, [saying,] “He is a heretic like my son Victor.”  And the emperor wrote a letter to the governor of Antinoe, saying, “Claudius will accept [nothing] from us, and he will neither hearken to our words nor obey them.  Do thou persuade him with all thy power to return to his allegiance to us, and if he will not do so cut off his head with the sword.”  When Saint Claudius heard that the emperor had ordered them to send him to Egypt, he commanded Sidrakos, his sister’s husband, [concerning her,] and committed her to his care, and he embraced him, and departed to the country of Egypt, together with the emperor’s envoys.  When he arrived in the presence of Arianus, the governor of Antinoe, and the governor saw him, he rose up and kissed his hand, and he entreated him, saying, “O my lord Claudius, do not this thing, and do not transgress the emperor’s command.”  And they held converse together in this wise until Arianus became furious and filled with wrath, and he drove the spear which he had in his hand into the saint, who delivered up his spirit straightway, and received the crown of martyrdom in the kingdom of the heavens.  And certain believers came and took the body of Saint Claudius, and swathed it with costly cloths, and laid it with the body of Saint Victor; and the bodies remained thus until the end of the days of persecution.  And the mother of Saint Victor came to the city of Antinoe, and she made the bodies ready for burial. And she carried them to the city of Antioch.  They say, however, that the body of Saint Claudius resteth now in the city of Asyut.  Salutation to Claudius.  Salutation to the one and twenty and to the six and sixty members of the palace of Claudius who suffered martyrdom through him.