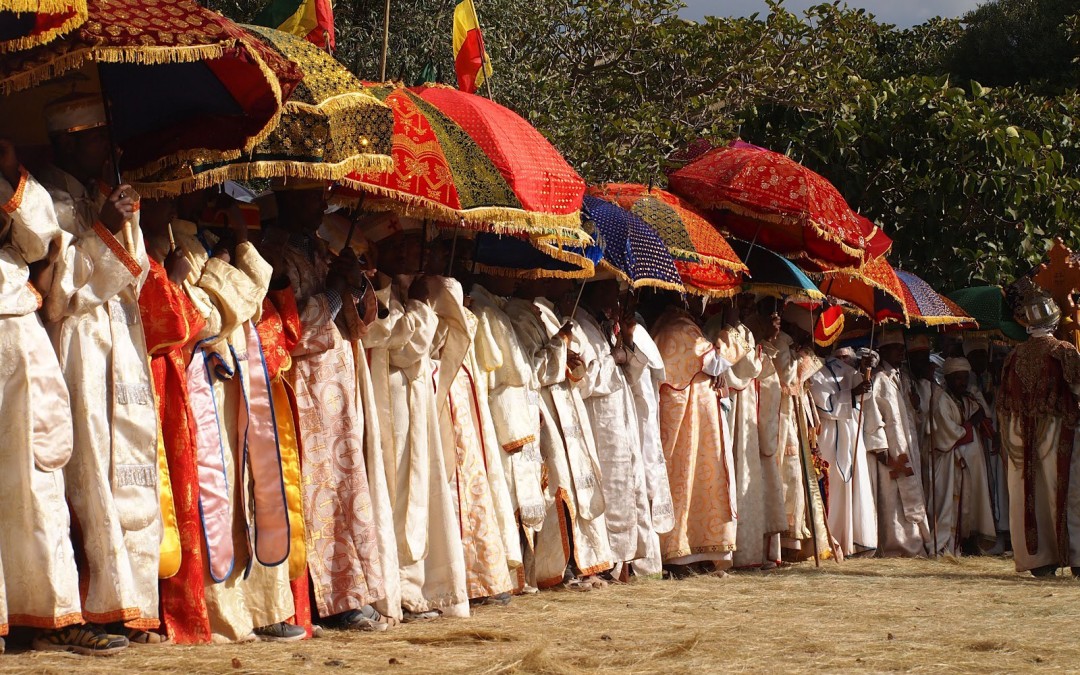 On this day died the holy father John, Bishop of Jerusalem.  This saint became a monk in his early years in the monastery of Saint Abba Hilarion the Great, with the father Abba Epiphanius, and he devoted himself to the ascetic life and fought a great fight.  And his knowledge and his virtues were noised abroad, and [the bishops and priests] chose him, and made him Bishop of Jerusalem, after he had been appointed Bishop of Cyprus.  And when this father had seated himself in his office, Satan led him astray through the love of money and possessions, and he gathered together much money, and he made vessels of silver for his table, and he used to eat out of them; and he never gave anything to the poor and needy, not even the broken bread-cakes.  And Saint Epiphanius heard the report of him, and then he remembered his spiritual fight, and how formerly he had rejected the world, and his devotion to God and the ascetic life, and his piety, and his mercy, and he had pity upon him from the depth of his heart, and he remembered his affection, for he was his brother in the Holy Spirit, and his friend of long ago.  And Saint Epiphanius rose up from Cyprus, and came to the city of Jerusalem, for the sake of this father Abba John, (although he made it appear to men that he had come to worship in the Temple of Jerusalem,) that he might save him from his error. And when Abba Epiphanius came to the city of Jerusalem, this father Abba John invited him to his house, and he placed before him a table whereon were set the beautiful vessels of silver with pottage in them.  And then Abba Epiphanius saw that Abba John had in him no mercy for the poor and needy; and he was very sorry for him, and his heart was in pain because of him.  And after he had gone forth from him Abba Epiphanius devised the following plan:  He was dwelling in one of the monasteries of Jerusalem, and he sent to Saint Abba John, saying, “Know, O my brother, that the elders of the city of Cyprus, and all the chiefs of the people, have come to visit me, and I wish thee to do me honor before them, and to send to me from your house the silver vessels of thy table that they may eat pottage from them”; and Abba John sent the vessels to him.  And Saint Abba Epiphanius took them, and sold them, and received the price of them, and he gave away the money in alms to the poor and needy.  And after a few days Saint Abba John said unto the holy and blessed Abba Epiphanius, “Give me back the vessels of my table which I sent unto thee”; and Epiphanius said, “Yea, I will.”  And Abba John demanded them from him a second, and a third time, and Epiphanius said unto him, “Yea, I will.”  And when he did not give them up, Abba John seized him by the hem of his garment in the church, on [the day of] the Resurrection of our Lord Jesus Christ, and he said unto him, “I will not let thee go until thou givest me back my [silver] vessels.”  And Abba Epiphanius prayed, and entreated God, and God made Abba John blind.  Then Abba John wept and entreated Epiphanius, who prayed to the Lord God our Lord Jesus Christ, and He opened for him one of his eyes.  And Epiphanius said unto him, “Behold, our Lord Jesus Christ hath left blind one of thine eyes so that thou mayest remember thy good spiritual fight, and thy strivings, and thy former good and willing deeds.  Know thou that I have sold the vessels of thy table, and have given the price thereof in alms to the poor and needy on thine account.  I only came to Jerusalem because I heard that thou wast a lover of money.”  And from that time Abba John awoke from his dream of inertness, even as a man waketh up out of slumber, and he walked diligently in the path of charity, and more than any man he gave away in alms all his money, and all the clothes which he had.  And he gave up the acquisition of money and the riches of this fleeting world, and at last, at the time of his death, there was not found with him one dirham of gold, or any smaller piece of money.  And God gave him the great gift of healing, and he worked many miracles, and he used to heal all those who were sick or who had diseases by anointing them with holy oil from the Tomb of our Lord Jesus Christ, and he protected them by means of the sign of the Life-giving Cross.  And having finished his spiritual fight and his divine excellences, and pleased God, he died in peace.  Salutation to John the Perfect, Bishop of Jerusalem.

And on this day also the Christian peoples of the land of Egypt are accustomed to celebrate the festival of the glorious angel, the Archangel Gabriel, the captain of the host of heaven, who preached the new tidings.  In the first place it was he who brought news to Daniel, when he was praying and entreating God for the return of the children of Israel from captivity, and for their deliverance from Satan.  And this great angel appeared unto him, and announced to him the deliverance of the children of Israel from the captivity of Babylon, and the building of the sanctuary in Jerusalem; and he announced to them the coming of our Lord Jesus Christ.  And he defined the number of years after the passing of which our Lord Jesus Christ would come, and he made him to know that He would be killed, and that afterwards the city of Jerusalem would be laid waste, and that no other Messiah would come after Him except the False Messiah.  And when the years which he had defined were ended, and the time had come for the Redeemer to arrive, this glorious archangel, and captain of the hosts of heaven, Saint Gabriel, came from God and announced to our holy Lady, the Virgin Mary, the God-bearer, the coming to her of the Son of the Living God, and His Incarnation through her.  And Gabriel appeared in the flesh because God loved him, and it was for this reason that He sent this angel on these two great missions.  And our fathers, the doctors of the holy Church, have commanded us to celebrate a festival in his honor each year.  Let us entreat him to intercede for us with out Lord and Redeemer Jesus Christ, that He may deliver us from our enemies, for he is nigh unto Him, and he standeth before His throne, so that by his intercession we may find grace before our God, to Whom are meet praise, and [ascription of] might, and laud, and the heartiest thanksgiving, and honor, [on] all days.  Salutation to Gabriel.

And on this day also is commemorated Cainan, who lived nine hundred and ten hundred (sic) years; and he died on the fourth day of the week.

And on this day also are commemorated ‘Abulag, the martyr, and two hundred martyrs, and our father Matyan, who were persecuted for righteousness’ sake.