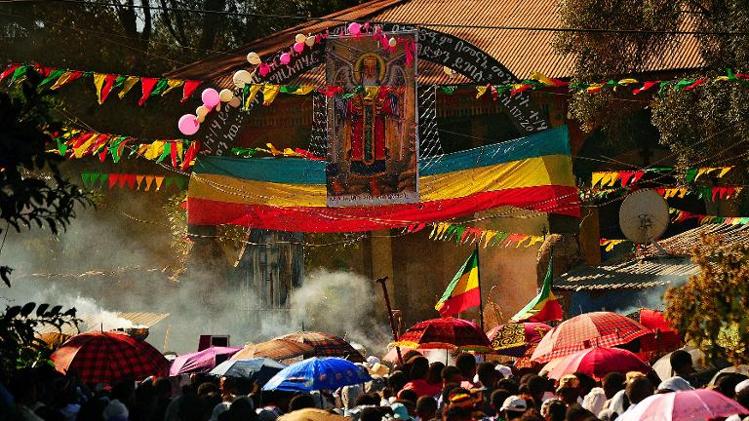 On this day is celebrated the festival of the consecration of the church of the blessed, and holy, and victorious fighter, the soldier of heaven, our father Minas, in the city which is called Maryut (Mareotis), and his miracles were made manifest, and his body revealed.  Now the body of the saint, having been hidden in the earth, the glorious and Most High God wished to reveal it.  And in those days there was a certain shepherd, who pastured his sheep near the hill wherein the body of Saint Abba Minas was hidden and buried, and this shepherd saw one of his sheep, which was sick of a grievous disease, dip itself in the water of the well which was near that place, and then roll itself in the dust of the hill, and it was healed straightway.  And the shepherd marveled, and he used to take all his sick sheep, and wash them in that water, and make them to roll themselves in the dust of that hill, and they were healed straightway.  And this also the shepherd used to do with all the sick folk whom the people brought to him; he mixed the dust from the hill with the water and smeared them with the mixture, and they were healed straightway; now the shepherd knew the cause of the healing.  And the report of this shepherd was heard by the Emperor of Rome.  And he had a daughter who was sick with running sores, and he sent her to the shepherd who healed her of her sickness, in the same way as he healed his sheep.  And having been healed she wished to know the reasons why that place healed her, and Saint Minas appeared unto her in a vision, and told her that his body was hidden in that place, and said, “Behold, God hath commanded thee to dig, and to raise me up.”  When she awoke she did as the saint commanded, and raised up his glorious body, and she built over it a beautiful shrine, and they laid his honorable body inside it.  And the emperor commanded his nobles and his officials to build their houses in that place, and a great city was built and it was called Maryut (Mareotis).  And God made manifest through the body of this Saint Abba Minas countless signs and miracles.  And the archbishop [of Alexandria], and his bishops, came and consecrated the church, as it were this day.  And the fame of the signs and wonders, which appeared in that church through the intercession and entreaty of Saint Minas, the martyr, was noised abroad [everywhere].  Salutation to the consecration of thy house, O Saint Minas.

And on this day also is commemorated Gebre Christos, the pure deacon.