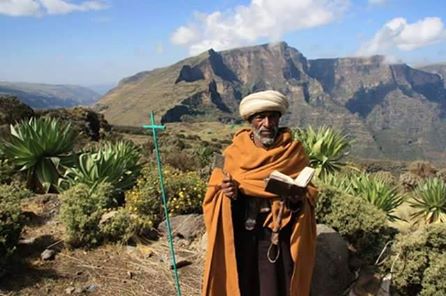 On this day died at a good old age the ascetic father and fighter, of a glorious memory, Abba Nafer (Abunafer), who was the first ascetic [to live] in the desert of Upper Egypt.  Now the history of this saint is related unto us by Paphnutius, who was moved by the grace of God, and was sent to see the servants of God who lived in the desert.  And he saw many of them, and wrote the history of their strives, and among these was Abba Nafer.  When this father came into the desert he found a well of water, and a palm tree, and he lived in that desert for eight years.  And one day this saint Paphnutius saw Abba Nafer coming to him, and he was naked, and the hair of his head and his beard covered his body.  When he saw Paphnutius he was afraid of him, and he thought that he was an unclean spirit, and Saint Abba Paphnutius held him fast, and made the sign of the Cross before him, and he prayed and said, “Our Father which art in heaven.”  Then Saint Abba Nafer said unto him, “Good is thy coming to me, O Abba Paphnutius.”  And when the saint had prayed before him, and had called upon him to put aside fear, the two prayed together, and held converse about the greatness of God.  And Paphnutius asked Abba Nafer to tell him how and by what means his coming to that place happened, and how he lived.  And Abba Nafer answered and said unto him, “I was living in this desert (i.e. monastery) wherein there are righteous and chosen monks, and I heard them talking about the greatness of those who live in the desert, and praising them for the good works of all kinds which they performed.  And I said unto them, ‘Are there here any who are better than you?’  And they said unto me, ‘Yea, those who live in the desert are held in honor by God.  We live near the world and the men who are in it, and if we sorrow, or are sad, we find someone who will comfort us; if we are sick, we find someone to visit us; if we are naked, we find someone to clothe us; and if we desire any desirable object we find it; but those who live in the desert lack everything.’  When I heard these words from them my heart burned like fire.  When the night came I took a little bread and I went out from the monastery, and I prayed and asked the Lord Jesus Christ to guide me to the place wherein I was to live; and then I set out.  And God prepared a certain righteous man for me, and I found [him] and I dwelt with him, until he guided me into the path of the desert monks.  Then I came to this place, and I found this palm tree, which beareth twelve clusters of dates each year; one cluster of dates serveth as food for me each month, and I drink water from this well.  And behold I have lived in this desert until this day, eight years, and I have never seen any man’s face but thine.”  And whilst they were talking together the angel of God came down to them, and administered unto them the Holy Mysteries, the Body and Blood of our Lord and God and Redeemer Jesus Christ.  And they ate a little food together, and then Saint Abba Nafer transformed himself, and became like a fire, and then he bowed his knees and worshipped God, and he embraced Saint Paphnutius, and delivered up his soul into the hand of God.  And the saint wrapped him in cloth made of sheep’s wool, and buried him in that cave.  And he thought within himself that he would live in that place instead of Abba Nafer, but when he had buried him the palm tree fell down, and the well of water dried up, which happened by the Will of God.  And when Saint Paphnutius came back into the world, he declared the histories of the desert saints whom he had seen, and especially the history of this Saint Abba Nafer, and the day on which he died.  Salutation to Abba Nafer.

Salutation to you, O ye who dwelt on the sand.

And on this day the angel of God appeared to Joseph in a dream, and told him to take the Child and His mother, and to return to the land of Israel.