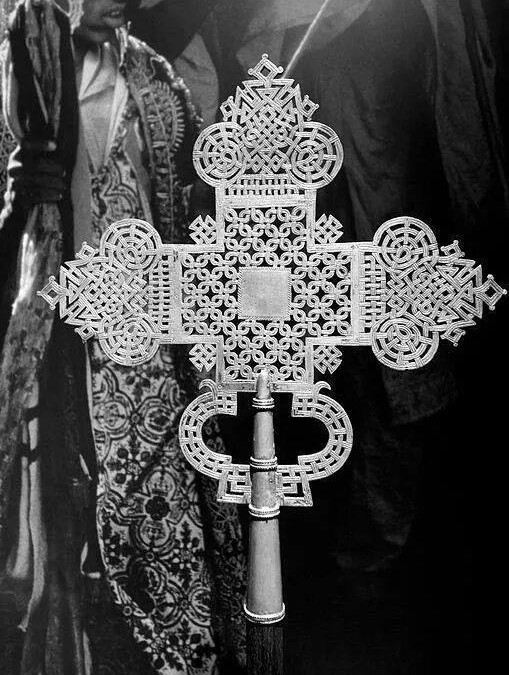 And on this day also is celebrated the commemoration of Abba Palamon, the great pilgrim and anchorite, who rejected the world, and dwelt in a monastery.  He devoted himself to God, and he fought so many fights that Satan became weary of fighting against him.  This saint dwelt for very many days in silence and solitude; he never laughed, and he never spoke to anyone, but he wept for his sins by day and by night.  Often Satan would come (?) to him to amuse himself with him, and to laugh at him, but he was not able to rejoice (?) over him wholly, for [the saint] was sad and clung to the Name of our Lord Jesus Christ; and because of this Satan was wroth with him.  One day Saint Palamon rose up and departed to Egypt, in order to sell the things, which he had made with his hands.  And as he was going along the road, and was weeping so bitterly that his eyes were nearly washed out of his head by the abundance of his tears, Satan led him astray on the road, and would not let him know where he was going; and at the end of six days the elder, being well nigh [dead] through hunger and thirst, fell upon the earth.  But God, the Lover of mankind, did not allow His servant Palamon to be destroyed through Satan, and He drove away the unclean spirit, and set it afar off from him.  And when the elder knew everything, which had happened to him, he cried out, saying, “O my Lord Jesus Christ, help me.”  And straightway he heard a voice, which said unto him, “Fear not, for the Enemy shall not prevail over thee.  But rise up and go a little towards the north, and there thou shalt find a righteous man, and elder monk, who dwelleth in the fastness of the mountain; his name is Latsun, and he hath undertaken many labors for My Name’s sake.  Tell him everything which hath happened unto thee from thy youth up, and how Satan hath tempted thee; he shall pray for thee that thy sin be forgiven thee.”  And straightway the holy and blessed Palamon rose up, and he took some of the things which his hands had made, and he departed to the mountain in the north, reciting as he went the psalm of David which saith, “O Lord deliver me for Thy Name’s sake”–to the end of the same (Psalm 79), and also the eighth psalm, and at length God guided him to the place where the elder Saint Latsun was.  When the elder Saint Latsun saw him, he rejoiced and he embraced him and took him up to the top of the rock.  After they had prayed, and sat down, Abba Palamon began to weep bitterly, and he told him all the sin, which he had committed from his youth up, and begged earnestly for forgiveness; and he also told him, how Satan had tempted him.  And he said unto him, “One day when I was journeying in Egypt to sell the work of my hands, Satan came to me, and made my mind to go astray, and he would not allow me to call upon the Name of my Lord Jesus Christ.  And he showed me a city, which had been built, like the city of a king, and in it were waters, and gardens, and trees.  And as I was thinking how I should sell the work of my hands, he appeared unto me in the form of a woman, who was sorrowing for the death of her husband, who had left her much money.  And she said unto me, ‘I will buy from thee.’  And she brought me into the upper room of her house, and she lifted down the basket from my head, and she made me to sit down and washed my feet.  And she commanded her handmaidens to bring a table and wine, and she besought me frequently to eat with her; and we ate, and drank, and were drunken.  And as we were talking together all the maidservants went out and we two were left together.  And straightway mine eyes burned like fire with the lust of fornication, and I remembered not God Who is in the heavens, nor His angels who serve therein, and I was like one who lay with her often.  Afterwards, when I woke up, I looked about me and I could find nothing.  There was no woman, no house, no table, no people, no beasts, no waters, and no gardens; but I found my head running round under the mountain of my abode, and I was as if I had neither eaten nor drunk.  Then I wept much, and I saw Satan standing far from me, and laughing at me.  And he said unto me, ‘Woe be to thee Palamon, the pilgrim, who dost jest and laugh with me.  Behold I can snare thee like a bird!’  When I heard his words I made the sign of the Cross over him, and he fled from me.  And now, O my father Latsun, I take refuge in thy holiness; pray to God to forgive me my sins and my error.”  And Abba Latsun, answered and said unto Abba Palamon, “Fear not, I believe on God that He will forgive thee thy sin.”  The they rose up, and prayed three days and three nights, and there came unto them a voice which said, “Fear not, O My faithful servants, henceforward the Enemy shall not prevail over you.  As for the sin which Palamon committed, I have placed it on the head of Satan, and not only the sin of Palamon have I placed there, but I will place upon him the sins of all those whom he hath tempted.”  After this Abba Palamon was blessed by Abba Latsun and he departed to his abode praising God; and he died in peace.  Salutation to Abba Palamon.

And on this day also is celebrated the commemoration of the blessed Saint Abba Garima.  The father of this saint was Emperor of Rome, and his name was Masfeyanos; the name of his mother was Sefengeya, and she was barren.  And having besought our holy Lady, the Virgin Mary, the God-bearer, she gave her this son; and she called his name “Isaac.”  When he had grown up she taught him the Books of the Church, and then Isaac was appointed deacon.  And the men of Rome having made him emperor, he sat and judged justly and righteously for seven years.  And when Saint Abba Pantaleon of the cell heard [of him], he sent to him, saying, “O my son Isaac, let the dead bury their dead, and do thou come and seek the kingdom of my Lord Jesus Christ”; and Abba Garima, having heard him, forsook the kingdom, and went forth by night.  Then the angel Saint Gabriel appeared, and he carried him on his shining wing and at the third hour brought him into the hand of Abba Pantaleon.  Now the length of the road was a journey of ten months and four days.  The King of Ethiopia at that time was ‘Alameda.  When Abba Pantaleon saw Saint Isaac he embraced him, and kissed him, and then he arrayed him in the garb of the monk; and the saint fasted and prayed so strenuously that his flesh congealed on his bones.  Then he went to a place [in] Madra and he lived there for three and twenty years, working countless signs and wonders, and casting out devils, and healing the sick.  One day he sowed wheat at dawn, and reaped it in the evening, and some of it he offered as an offering; and on the following day he took the remainder up to the threshing floor, and he trod out the sheaves of wheat, and obtained therefrom seventy-seven measures of grain.  And he also planted a vine shoot on a rock, and it took root, and put forth leaves and bore fruit immediately.  And once when he was writing a letter, and the sun was about to set, he adjured the sun to stand still and it did so until he had finished his letter.  And the spittle, which he spat out, remaineth unto this day, and is a means for healing the sick; and once when a reed fell from his hand, it took root that very day.  One day certain calumniators went to Abba Pantaleon and said,  “The priest Isaac consecrated the Offering after he had eaten.”  And Abba Pantaleon having gone to him caught him on the road, and he said unto him, “Wait, man, so that I may tell thee a secret.”  And Saint Isaac said unto him, “Let men shut me in, and remove the stones from us”; and they turned aside for a distance of five stadia.  And Abba Pantaleon said unto him, “O my son Isaac, thou hast terrified me,” and thereupon he was called Abba Garima.  And having finished his good course, our Redeemer appeared unto him, and promised him that [He would forgive the sins of] him that should call upon his name, and celebrate his commemoration.  And straightway he was caught up in a shining cloud and disappeared.  Salutation to Abba Garima.

And on this day also is celebrated the commemoration of the saints of ‘Akuoren… and Abba Palaomn, and Bartholomew, and Alexandra, and Alexander, the martyrs, and Joseph, and ‘Arsema.