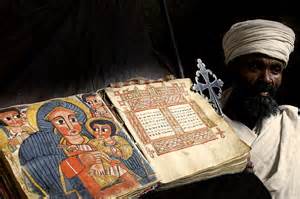 On this day died the holy father, Abba Damianus, the thirty-fifth Archbishop of the city of Alexandria.  This saint became a monk in his early years in the desert of Scete, and he continued to fight, and to devote himself to God for seventeen years.  He was appointed a deacon in the monastery of Saint Abba John, and after this he went to the monastery of Saint Abba Bataron, that is to say, the “Monastery of the Fathers.” which is to the west of Alexandria, wherein he devoted himself to God and fought a fight like unto that of the desert monks.  When Abba Peter was made Archbishop of the city of Alexandria, he sought for a learned man to live with him in his house and to help him with the work of the archiepiscopate, and with whom he could take counsel concerning the work of the Church.  And men praised Damianus to him, and he had him brought to him, and asked him if he would live with him; and Damianus agreed to this, and he dwelt in the archbishop’s house; and he pursued a good course of life and all men loved him.  When Abba Peter and archbishop died, the bishops and the doctors agreed with one consent, and against his will they made this Saint Damianus Archbishop of the city of Alexandria.  And his course of life was wholly good.  Frequently he wrote Epistles and Discourses, and sent them to all the cities.  Now there were in the desert of Scete of the monastery of Saint Abba Macarius certain evil heretics of the following of Matlis, the heretic, and these men used to drink wine on the night of the day of their Eucharist, and on the following day they would receive the Holy Mysteries.  As an excuse they said that our Lord Gave to His disciples two cups.  When He gave them the first cup He said unto them, “This is My Blood,” and when He gave them the second cup He said, “This is My Blood.”  And Saint Damianus showed them their error, and said unto them, “The first cup was symbol of the joy of the Old Covenant which was, in the Law of the Old Covenant, the Canon of the Apostles banneth every one who tasteth anything before the Offering.”  Some of the heretics turned from their evil act and submitted to him, but some of them would not submit to him, and would not turn from their counsel; and these he excommunicated and drove them forth.  In the days of this father died Theodore, Archbishop of the city of Antioch, and there was appointed in his place a heretic who did not believe in the Holy Trinity, and who said that God was One Person only, and that Three Persons ought not to be mentioned.  And he sent a letter [containing] his wicked Faith to Abba Damianus who, when he had read it, was exceedingly sorry for him, because he did not find in his letter the name of the Holy Trinity; and because he said therein, “It is not meet that men should mention the Trinity, for God is One by Himself.”  Thus did he speak in his madness, and this father was sorry for him with a great sorrow.  And he wrote to him a letter in which he explained the matter, and said unto him, “If God is without division, [He is] one in His Godhead and Self.  But He is Three Aspects, Three Persons, and One Being, He is for ever, and [this] number [of Persons] can neither be added to nor diminished.”  And he wrote to him many testimonies [derived] from the words of the Holy Scriptures, and wise teachings, to make him understand.  And he said unto him, “In God is life,” and he proclaimed that He is forever, and that there is no [god] besides Him.  And when this letter, which was full of the grace of the Holy Spirit and the True Faith, reached this heretical Archbishop of the city of Antioch, the darkness of his heart (or, mind), and his little knowledge did not permit him to understand its meaning, but he continued in his infidelity.  And this Abba Damianus separated himself from communion with this heretic, and he did not allow any of his flock to mention him at the time of prayer, and at the time of the Offering, for twenty years, that is to say up to the time of his death.  After this Abba Damianus continued to protect his flock by means of his Epistles and Admonitions for a period of three and thirty years; and he attained a good old age and pleased God, and died in peace.  Salutation to Archbishop Damianus.

And on this day also is celebrated the commemoration of Isidore, the martyr.