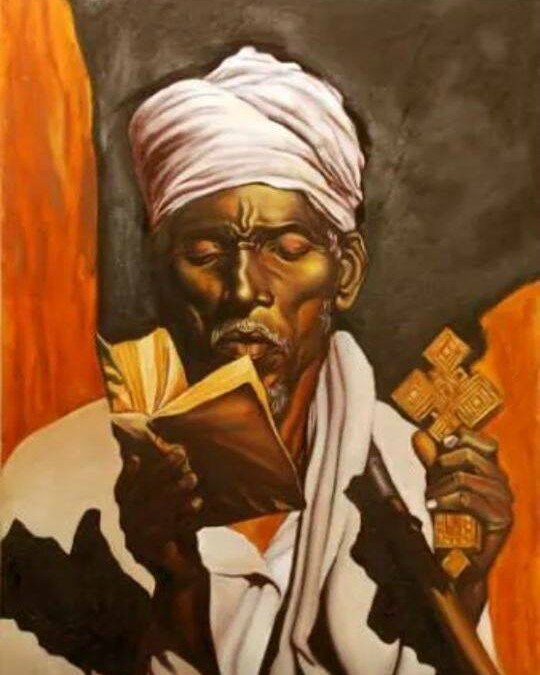 On this day died the great prophet Elisha.  This man came from a village of Israel, the name of which was ‘Alamut; and his father’s name was Yosafet, and he was born in Gilgal.  And then he became the servant of Elijah, the prophet, and he was most obedient to Elijah before he went up into heaven.  And he went with him to the Jordan, and when Elijah said unto him, “Ask of me what thou wilt.” he did not ask him for any of the possessions and treasures of this world, but Elisha said unto Elijah, “Let a double portion of the spirit which is upon thee be upon me.”  And Elijah said unto him, “Thou hast asked what is difficult, nevertheless if thou seest me when I go up from thee even thus shall it be.”  And as the two were going along together, chariots of fire came forth, and horse[s] of fire, and in this wise Elijah went up into heaven.  And Elisha the prophet saw him, and he said unto him, “My father, and father of the strength and might of Israel”; and he snatched at his garment and [rent it] in twain.  And Elijah let fall his rough skin [cloak, and it fell upon the head of Elisha the prophet; and the spirit of Elijah was doubled upon Elisha.  For Elijah divided the waters of the Jordan into two parts once, but Elisha did so twice; and Elijah raised one person from the dead, and Elisha raised two.  And after this he divided the river and passed between the two parts thereof.  And when he went to Jericho the men of the city asked him, saying, “Our water is bitter and the crops will not grow under it; [make it sweet for us].”  And Elisha took a pot, and put some salt therein, and cast it into the well of water, and the water became very sweet.  And he willed to make manifest a great miracle when he cast the salt into the water; he changed what was bitter in the water by means of salt, he made sweet what was salt by means of salt. One day as he passed along the road the young boys of Israel mocked him, and he cursed them, and the wolves carried off nine and forty youths in one day.  And a certain woman of the wives of the prophets came unto him, and said unto him, “My husband died owing a debt, and behold they have seized my children for it.”  And Elisha commanded her, saying, “Go and fill all the jars which are in thy house with water, and borrow other vessels from thy neighbors, and fill them all with water”; and by his prayer he changed the water in all the vessels into sweet oil.  And the woman sold the oil, and extinguished the debt, which was on her husband.  And Elisha blessed the barren woman and she bore a son.  And when that child grew up he fell sick of a fever and died, and Elisha prayed over him and restored him to life.  And when Naaman the Syrian came to him he cured him of his leprosy, and though Naaman brought to him much money, and raiment of gold, he would accept nothing from him.  And when Geyaze (Gehazi), his servant, acted craftily and accepted some of those possessions, secretly and without Elisha’s permission, the prophet had knowledge about it through the Holy Spirit.  And he cursed his servant, and Geyaze (Gehazi) became a leper, and his sons and all his seed [were lepers].  And a great famine happened in those days, and by the prayer of this prophet in one night it changed into a great abundance; and besides this, the prophet wrought many signs and wonders.  When he died and they were burying him in a grave, they brought at the same time another dead man and laid him down on the grave of the prophet; and that dead man came to life straightway, and he rose up and followed the people, and departed to his house.  And the prophet Elisha prophesied in the reigns of four kings, who were Joram, and Ahaz, and Gotolya, the mother of Ahaz, and John, the son of Ahaz; and all the days of his prophesying were fifty years and more.  He prophesied before the coming of our Lord Jesus Christ six hundred years, and he died in peace.  Salutation to Elisha.

And on this day is celebrated the commemoration of ‘Arsastal, the martyr, and Minas of Busar.