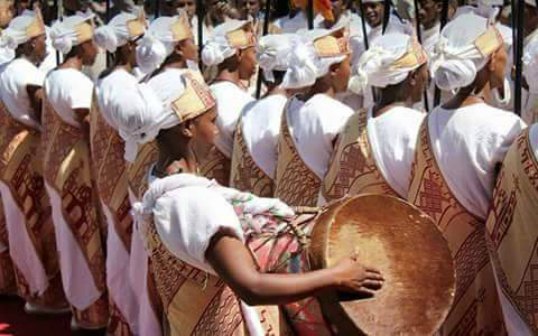 On this day is celebrated the commemoration festival of the glorious Saints Cosmas and Damianus, and their brethren, and their mother, and the consecration of their church, and the manifestation of their miracles.  And behold we have written their histories in the section for the twenty-second day of the month of Hedar.  Salutation to the holy house, which was built for the sons of Theodada, after the period of apostasy, had passed.

And on this day also died Paul the Simple, the disciple of Abba Anthony.  This Paul was a peasant, and was very simple, and he married a woman who was beautiful in her person and evil in her actions, and he begot children by her.  One day when he came in from his field he found her committing fornication; and when he saw her he laughed, and said unto the man, “Take her and her child.  I shall not be sorry, and I will go and become a monk.”  And when he had come to Abba Anthony, he put on the garb of the monk, and he followed the footsteps of Anthony with prayer and fasting until the power [to cast out] demons, and to heal, was given unto him.  One day they brought a man who was possessed of an evil devil to Anthony to heal, and Anthony commanded Paul to heal him.  And Paul said unto this devil, “Get thee out, Anthony saith unto thee”; and the Satan reviled him and Anthony.  And Paul said unto him, “If thou will not go out I will tell Christ, and thou shalt see how He will punish thee”; and thus saying he went out at noonday, and stood up on a stone, which the sun had heated.  And he said, “As God liveth, I will not come down from this rock, and I will neither eat nor drink until the demoniac is healed”; and straightway the devil cried out and went forth in the form of a great serpent, and entered the Red Sea.  This Paul considered the works of men, and wept for sinners, and made intercession for them up to a good old age; and he died in peace. Salutation to Paul.