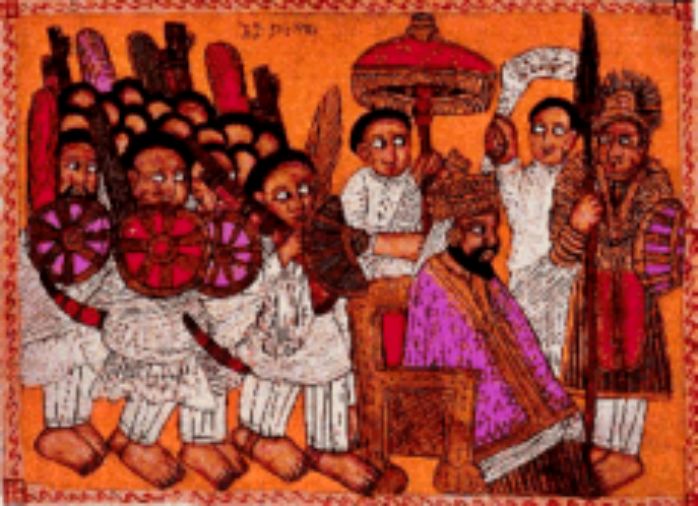 And on this day also died the holy father Abba Nob, the confessor.  This saint was a devoted monk and fighter in one of the monasteries of Upper Egypt.  And when many martyrs had shed their blood under the tortures of Diocletian, and [the people] had carried away their bodies, they remembered Saint Abba Nob, and brought him to Arianus, governor of Antinoe.  And the governor said unto him, “Cast incense to Apollo, and cast away this thy garb of the monk.”  And the saint answered and said unto him, “This shall never be done by me, and I will never abandon my Lord Jesus Christ, and I will not worship idols of stone.”  And the governor tortured him with every kind of torture, and the saint endured them by the might of our Lord Jesus Christ.  Then the governor banished him to Five Cities, and [the governor] cast him into a pit; and he lived therein for seven years, until God blotted out Diocletian and made Constantine, the righteous, emperor.  And Constantine sent out an Edict into all countries ordering his officers to release all those who were in prison for the Name of our Lord Jesus Christ; and he commanded them to bring these prisoners to him, so that he might be blessed by them.  And he said unto his messengers, “If ye cannot bring them all, bring to me their honored ones, and those who are learned, and the elders among them, so that they may bless me, and lay their hand upon my head, and especially those who are well known, that is to say, Abba Zacharias from the city of Ahnas, and Maximus from the city of the Fayyum, and Agabius from the city of Dakhnin, and Abba Nob from the city of Balaos.”  And the emperor’s messenger went round about in all the countries, and the officers brought out all those who were shut up in prison, and they rejoiced and glorified God and sang to Him.  And the messenger of the emperor sought for Abba Nob, but the holy man having been expelled from Five Cities (Pentapolis), had gone to the city of Basla, opposite his city, where he lived and wore apparel of iron.  And the messenger of the emperor found him, and took him with him, and he made him embark in a boat, and at length he arrived at the city of Antinoe.  And the Christians gathered together, and there were four bishops among them, and they made Abba Nob a priest against his will; and he consecrated the Offering and administered to the people the Holy Mysteries.  And when he had finished the Office he cried out and said, “Holiness to the holy ones!  Let him that is holy receive holiness!  God be with you all!”  Then he saw our Lord Jesus Christ sitting upon the altar, and He forgave the sins of the people who were penitent.  After this the saints followed the apostle to the emperor; now they were in number two and sixty.  And they made ready for them two and sixty chariots, and each of them rode upon a chariot.  And as they passed along the road, virgins came forth from the nunneries, which were there, and welcomed them; and the virgins were in number seven hundred, and they sang to the saints until they were out of sight.  And when the saints came to the Emperor Constantine, he commanded his servants to wash them with water, and to array them in new apparel, before they entered his presence; and they did as he commanded.  Now Saint Abba Nob did not wash himself with water, neither did he change his apparel.  Then the saints entered the presence of the emperor, and he was blessed by them, and he kissed their wounds, and he paid them honor and gave them much money, but they would take nothing from him except sacred furniture and vestments for the churches.  And after he had been blessed by them, and had embraced them, he set them on their way and said farewell to them; and they returned to their country in peace.  And Saint Abba Nob went to his monastery and finished his fight nobly, and he departed to Christ, Whom he loved.  Salutation to Abba Nob.

And on this day also is celebrated the commemoration of Markora, and Thomas, and Philip.