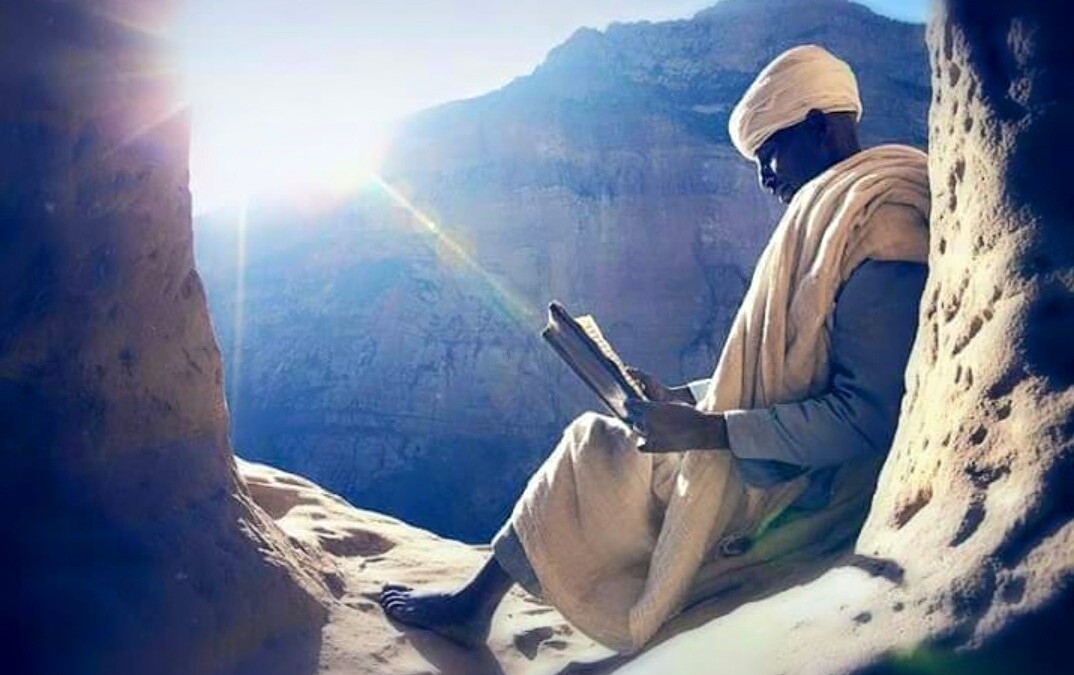 On this day Saint Judah (Jude), the apostle and martyr, became a martyr; he was the son of Joseph the carpenter and was one of the Seventy-two disciples.  This saint preached in many cities, and he came into the island and preached therein, and built a church there.  And he went to the city of Edessa and healed Abgar, the King of Edessa, of his illness, and he baptized him with Christian baptism.  After this he went to ‘Araz and preached therein, and baptized many of the people thereof with Christian baptism.  And the governor of that city seized him and tortured him with many tortures; he nailed iron cases on his feet, like sandals, and made him run in them for the distance of a stade, and he hung him up, and shot arrows at him, and the saint delivered up his soul.  Before they tortured him he sent an Epistle to the believers, and that Epistle is the seventh in the Book of the Apostles.  It is full of wisdom and grace, and by its means he converted many of the pagans and brought them into the Faith of our Lord Christ during his lifetime and before his death.  Salutation to Judah (Jude), whose feet had red-hot iron cases nailed on them.

And on this day also died the holy father and fighter Abba Peter, the thirty-fourth Archbishop of the city of Alexandria.  This father was made archbishop when the Emperor ‘Asbasyanos (Vespasian) drove out Archbishop Theodos who would not agree with his opinion, and he sat on the throne of Mark the evangelist without bishops for many years.  And the emperor would neither permit the bishops, nor his nobles who were in the city of Alexandria, to appoint an archbishop.  And after a few days there was appointed over the city of Alexandria a good, and excellent, and Orthodox governor, and the elders and the believers gathered together to him, and informed him of their grief because they had no archbishop.  And he commanded them to go out to Debre Zegag, that is to say Debre Mahew, under the pretence of [going to] pray, and to appoint for themselves an archbishop.  Then they rejoiced at this counsel and they took Abba Peter, who was a priest, and they went out forthwith to Zegag, and they appointed him archbishop, and rejoiced in him.  Before this Saint Severus, the holy man, died, and the city of Antioch remained without an archbishop.  When the believers of the city of Antioch heard that Abba Peter had been appointed archbishop, they also appointed to be their archbishop a certain believer whose name was Theophanius, and he and father Abba Peter were of one accord in the matter of the True Faith.  And they wrote letters to each other on theological matters, and each preached the doctrine of his friend, and mentioned him at the time of prayer and at the Offering, but they were unable to enter each other’s city, for Abba Peter lived in Debre ‘Anabanya, which was to the south of Debre Zegag, and Abba Theophanius lived in Debre ‘Aftonyas, which was outside the city of Antioch.  In those days there were in the city of Alexandria six hundred monasteries, and two and thirty villages, and all their inhabitants belonged to the True Faith (except the [so-called] Christians of the city of Alexandria), and all the districts of Mesr (Cairo) and Upper Egypt, and all the monks of the monasteries of the desert of Scete, and Ethiopia, and Noba.  All these were of the True Faith, and they accepted the appointment of father Abba Peter as archbishop, and they walked in his commands; and he never ceased to write to them Epistles, and he sent them to all believers and strengthened them in the True Faith.  And he used to go round to all the monasteries of the city of Alexandria and the villages thereof, and teach the people, and admonish them, and strengthen them.  And he had a certain holy and learned disciple whose name was Damianus, and who became archbishop after him, and he used to help him in all the work and in directing the people.  And this father Abba Peter once came into the city of Alexandria, and saw the works of its people, and inspected them and strengthened them.  And thus he remained in his office, and traveled about like the Apostles, and shepherded his flock for a period of two (?) years; and he was strong in the True Faith and died in peace.  Salutation to Peter who was made archbishop at Zegag.

On this day also died Pilate, the confessor.  Salutation to Pilate who washed his hands of the Blood of Jesus Christ.  [Waiting in the Bodleian MS.]

And the doctors of the Church had decreed that on this day Christians shall celebrate the festival of Peter and Paul, that they may bless the entrance of the winter season.  Salutation to Peter and to Paul, [and to] the sequence of the winter.  [Wanting in the Bodleian MS.]