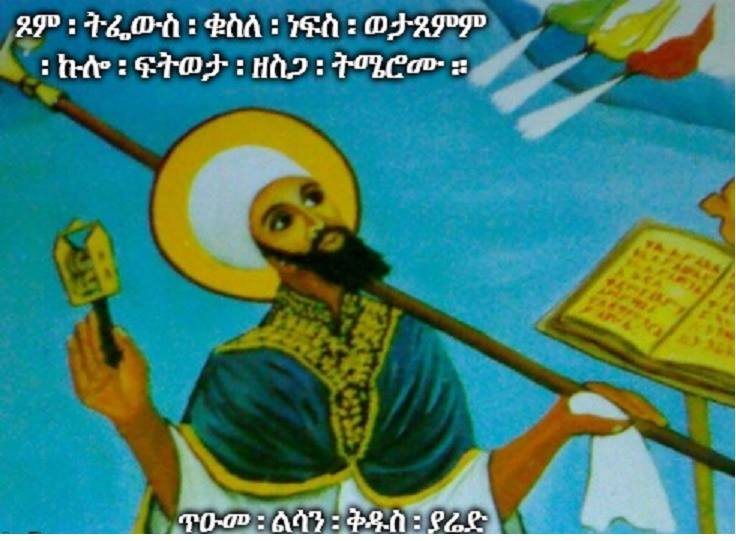 On this day died Ananias the apostle.  The apostles appointed this saint Bishop of the city of Damascus, and he preached in the districts round about the preaching of the life-giving Gospel.  And he preached in the house of Gabriel also and converted many of the men thereof to the Faith of our Lord Jesus Christ, and he baptized them with Christian baptism, and illumined them with the light of the True Faith.  And he baptized Paul the apostle, when God sent him to him, and he laid his hand upon him, and upon his eyes, and God wrought great miracles by his hands; and many of the Jews and Gentiles believed through his preaching.  And after this Lucianus the governor seized him, and tortured him with divers kinds of severe tortures, and he cut open his sides with knives, and burned him with fiery torches.  And after this they took him outside the city, and the governor commanded the soldiers to stone him with stones, and they stoned him; and he delivered up his soul into the hands of our Lord Jesus Christ, for Whose Name he died.  Salutation to Ananias.

And on this day also Saint Thomas, of the city of Sandalat, became a martyr.  When the days of this saint from the city of Sandalat were eleven years, Michael, the angel of God, appeared unto him when he was asleep in a field; now he was a swineherd, and he commended him to go and to confess our Lord Jesus Christ; and he rose up, and taking with him only a whip of string, he departed to the city of Alexandria, and confessed our Lord Jesus Christ before its governor.  And the governor said unto him, “Worship the idols,” and he promised to make him his scribe if he did so; and Saint Thomas was wroth with him, and he shook out that whip of string, and beat the governor severely with it.  And the governor had him seized, and tortured very severely, and he cut his body with iron saws; and the saint begged for help from our Lord Jesus Christ, Who sent His angel to him, and healed his wounds.  And the governor having shut him up in prison, the keeper of the prison asked him to heal his son who was sick, and the saint gave him the whip of string, and said unto him, “Lay this upon thy son, and by the might of God he shall recover straightway”; and the keeper of the prison did as the saint commanded him, and his son recovered forthwith.  When the governor heard of this he had the saint brought before him, and he said unto him, “Sacrifice to the idols”; and, laughing at him, the saint said [that he would do so].  And the governor rejoiced exceedingly, and took him with him, and carried him to the house of idols.  And the saint asked our Lord Jesus Christ to destroy the idols, and straightway they were smashed in pieces.  And the devil who was over them leaped upon the governor, and choked him until he confessed, saying, “There is no god except the Lord Jesus Christ, the Son of the Living God.”  When the people saw this, they marveled exceedingly and they cried out, saying, “There is no god except the Lord Jesus Christ.”  And after this those who had not believed shut the saint up in a dark cave, wherein he remained for fifteen days without food and drink; and the angel of God used to visit him.  Then they hung him up, head downwards, until much blood ran down out of his mouth; and the angel of God came down and delivered him.  And a certain woman had a blind son, and she took some of the blood, and smeared it upon the eyes of her son, and he received his sight straightway.  And after this the governor shut the saint up in prison for a few days.  Then he had him brought out, and the soldiers set a lioness at him, and she came to him and licked his feet; and they also smote him upon his mouth with iron goads.  Now there were with him under the torture Saint Babnuda, of the city of Bandara, and Saint Moses from the city of Balkim, and they encouraged each other to endure.  And after this they boiled oil and pitch together, and poured it over the head of Saint Thomas, and no injury happened to him.  And they also mutilated him, and made him put on the iron boots, and hung a large stone from his neck.  When they were tired of torturing him, Arianus the governor took him with him to bring him to the city of Antinoe.  And when they arrived at Taw, they cut off the head of Saint Thomas, and he received the crown of martyrdom in the kingdom of the heavens.  And those who were tortured with him during the days of his torture were six (or, seven) hundred men and nine women.  Salutation to Thomas, and salutation to those who were tortured with him; [and these were in number] three thousand (sic) men and nine women.

And on this day also are commemorated four and twenty martyrs, and Mamas, and Silas, and Lazarus, the beggar, who is mentioned in the Gospel of Luke (Chapter xvi, verse 20).