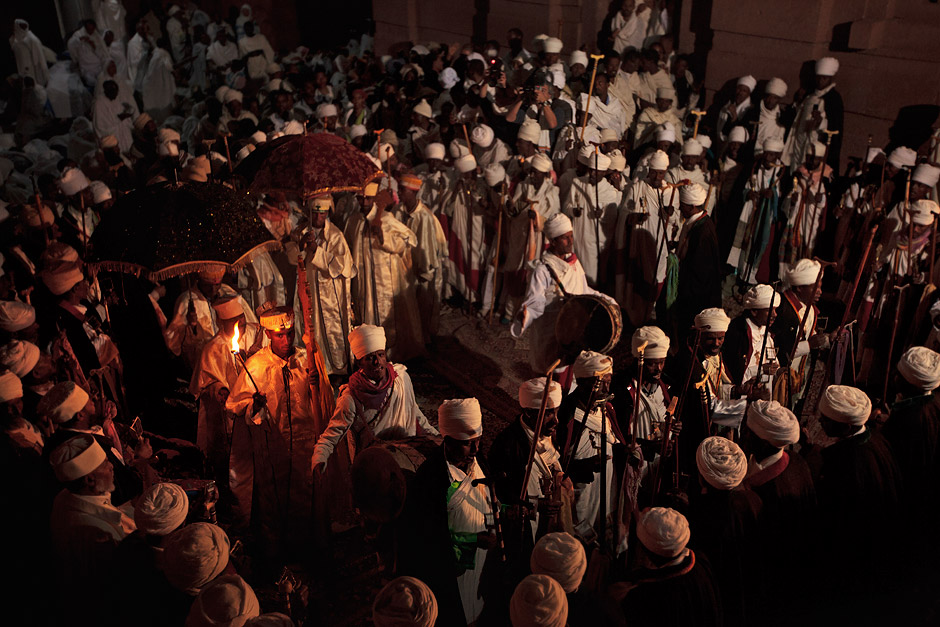 On this day died the holy father, Abba Theodosius, the thirty-third Archbishop of the city of Alexandria; it is after him that Christians in the land of Egypt were called “Theodosians.”  After this father was appointed archbishop, certain evil men rose up against him, and drove him forth from his office on the advice of the emperor, and they appointed in his place a certain man whose name of Acacianus, Archdeacon of the city of Alexandria. This man was of the number of those who subscribed the statement that this father was [not] worthy of the office of the archiepiscopate.  And they drove out this father to the city of Germanos, and he dwelt there for three months.  And Abba Severus was ordained in the country of Egypt in those days, and he comforted this father, and reminded him that tribulation came upon the apostles, and also on John, the Mouth of Gold (i.e. Chrysostom).  Then this father went to the city of Malig, and dwelt there for two years.  And the men of the city of Alexandria rose up against the governor, and demanded their shepherd, and he brought back this father Theodosius to his office, and expelled Acacianus.  And the story of him was heard by the Emperor Justinian from the God-loving Empress Theodora; and she wrote a letter, saying, “He who was first appointed shall sit in his office.”  And one hundred and twenty priests formed themselves into a General Council, and they subscribed a statement, saying, “Abba Theodosius was first appointed.”  And straightway Acacianus rose up before the people, and said, “I have transgressed; evil men force me.”  And then the people asked this father to remove the ban of excommunication from Acacianus provided that he would promise never again to minister as priest or deacon; and Acacianus agreed to this, and Theodosius removed the ban of excommunication from him.  Now the emperor was corrupt in his faith, and he imagined that Archbishop Abba Theodosius agreed with him in his evil faith.  And he wrote a letter of his officers who were in the city of Alexandria, and said unto them, “If the Archbishop Theodosius is at one with us in our belief, let another office be added to his archiepiscopate, and let him be governor of the city of Alexandria; but if he be not at one with us in belief, he shall go forth from his office.”  And when this father heard these words he said, “Thus said Satan to our Lord Christ in the desert, I will give thee all the kingdom of the world and the glory thereof, if thou wilt worship me” (Matthew iv, 9).  And Saint Abba Theodosius rose up and went forth from the city of Alexandria, and departed into Upper Egypt, and he dwelt there for a few days, strengthening the believing people in the True Faith.  And the emperor heard that the saint had gone forth from the city of Alexandria, and he sent him a letter to persuade him, saying, “I want to meet you, I want thee to bless me and to give me counsel.”  And Abba Theodosius went to Constantinople, and the archbishop, and all the people, and the soldiers went forth to welcome him; and they set him upon a high throne, and disputed concerning the True Faith.  And the emperor continued to persuade the saint for many days, but the saint vanquished him with the words of the Holy Scriptures, and with the words of the Fathers.  And when he would not agree with him, the emperor expelled him from his throne and sent him to Upper Egypt; and he appointed in his place another man whose name was Paul.  And when that Paul came to the city of Alexandria, the people would not receive him, and he remained for a whole year, but only a very few people received the Offering from his hands.  When the emperor heard of this he commanded the soldiers to shut the churches until the people submitted to Paul the archbishop, and the believers used to go outside the city to the church of Saint Mark the evangelist, and to the church of Cosmas and Damian, and partake of the Offering, and have their children baptized with Christian Baptism; and when the emperor heard this he had the churches opened.  When Abba Theodosius heard this he was afraid that the emperor would lead them astray, and he wrote a letter to the people which was full of every kind of consolation, and he sent it to them, and strengthened them in the True Faith, saying, “Take good heed and submit not yourselves to that heretic Paul.”  And Theodosius remained in exile in Upper Egypt for eight and twenty years, and he lived in the city of Alexandria four years; and all the days of his life (sic) were two and thirty years.  And this father composed many Homilies and Treatises of Doctrine, and the believers in the country of Egypt continued to be called “Theodosians” until the days of Abba Jacob, [when] they were called “Jacobites.”  And having finished his good course he died in peace.  Salutation to Theodosius.

And on this day also Basil and Bifantius became martyrs.