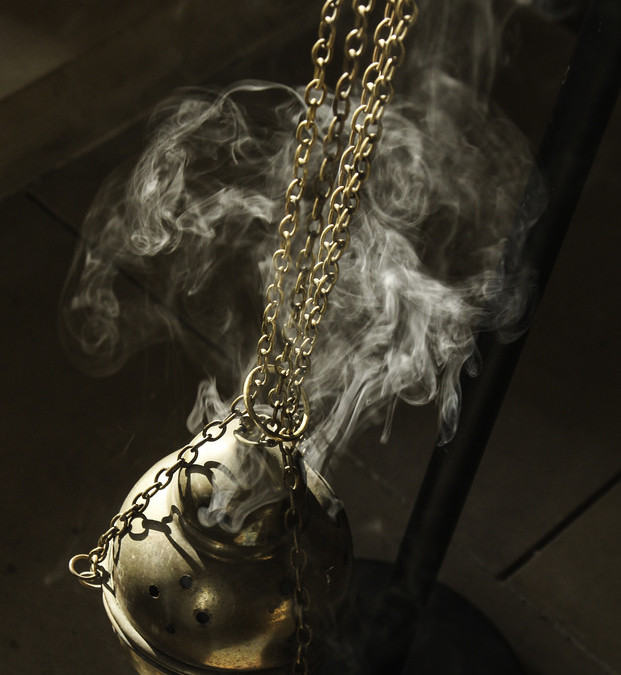 And on this day also nine fighters of the spiritual fight from Debre Tona (or, Kona) became holy martyrs; these were Abba Basadi (‘Absadi), and Abba Cotolus, and Abba ‘Ardama, and Abba Muse (Moses), and Abba ‘Esey, and Abba Nikales (Mikalas), and Abba Kal, the monk, whose name is Cotolus, and Abba Basodisa, and Cotolus; and they were priests.  And the angel of God appeared unto them, and commanded them, saying, “Proclaim boldly our Lord Jesus Christ.”  And they rose up straightway to go to the governor, and they found a ship, and having embarked therein, these five (sic) fighters made an agreement together and went to the governor; and Saint Abba Basadi (‘Absadi) spoke to the governor boldly and without fear.  And the governor asked him about his city, and Abba Basadi (‘Absadi) told him that he was from the city of Tona, and his companions also, and the governor commanded the soldiers to shut them up in prison.  And after this he brought them out, and tortured them very severely, and he commanded them to hang stones from their necks, and to shut them up in prison again.  And our Lord Jesus Christ appeared unto them in the prison house ad made them strong to endure … in the kingdom of heaven.  And after this the emperor sent them to the city of Alexandria, and they were tortured there very severely.  And then he threw them into two cauldrons full of sulphur and pitch, and they lighted so great a fire under them that the flames rose up to a height of twenty cubits.  And after this he had them taken out of the cauldrons, and the soldiers cast them into a red-hot oven; and our Lord Jesus Christ appeared unto them, and raised them up, whole and uninjured, and made them strong and restored them.  And then they came to the governor and confessed our Lord Jesus Christ before him; and when the people saw this one hundred and thirty of them believed, and became martyrs.  And after this the governor tortured the saints severely.  And he had the idol Apollo, seated upon his throne, brought to them, and commanded them to worship him, but they kicked him with their feet, and he fell down from his throne, and was smashed in pieces; and the governor commanded the soldiers and they cut off their feet.  And they cut off the head of Abba Basadi (‘Absadi) with the sword, and he received the crown of martyrdom in the kingdom of the heavens.  And after him they cut off the heads of the five (sic) others, and they burnt Saint Cotolus in the fire, and they all received the crown of martyrdom in the kingdom of the heavens.  Salutation to the company of one hundred and thirty saints, the devoted followers of the seven (sic) martyrs.

And on this day also Abba Hor, and Abba Besoi, and Daydara (Yedra) their mother became martyrs.  Abba Horsa was a soldier in the army of Antioch, and he confessed our Lord Jesus Christ.  And the governor commanded the soldiers, and they cut off his right hand, and they tied a rope to him, and an ox dragged him through the city.  And they made flat pieces of iron red-hot in the fire, and laid them upon his body, and they cut off his left hand, and boiled some lead and poured it into his mouth.  After this they thrust him into a skin filled with vipers, and snakes, and scorpions, and then they beat him with rods.  And he cried out, saying, “O Jesus Christ, help me in all this torture”; and our Lord Jesus Christ came down to him, and strengthened him, and raised him up sound and uninjured, even as he was at first.  And then his mother came and comforted him, and she rejoiced in his strife; and one told the governor about her.  And he had the mother of the saint brought, and he said unto her, “Sacrifice to the idols,” and he raged at her, and [tried] to frighten her; but she was not afraid of his raging, and she would not obey him.  And he commanded the soldiers to make iron rods red-hot in the fire, and to lay them on her sides, and when they did so she rejoiced, and sang hymns to the Living God, and she ascribed holiness to Him, and glorified Him because He had held her to be worthy to suffer for His Holy Name.  And after this she delivered up her soul, whilst she was under torture, and she received the crown of martyrdom.  And as for Saint Abba Hor they boiled him in a cauldron he praised God and was without pain.  And they informed the governor of this, and he marveled exceedingly, and he was frightened and became filled with wrath.  And he rose up and came to the cauldron, having a spear in his hand, and he drove his spear into the breast of the holy man, who delivered up his soul into the hand of God, and received the crown of martyrdom in the kingdom of the heavens.  And they also tortured his brother Abba Besoi very severely, and they cut off his head with the sword, and he received the crown of martyrdom in the kingdom of the heavens.  Salutation to thee O Besoi, the soldier, and to thy brother Hor.

And on this day also died Mark, Emperor of Rome.  This saint reigned in his virginity for five years, and he ruled his people justly and righteously.  And then when the people forced him to marry a wife, he went by night into the church, and stood up before the picture of the holy two-fold Virgin Mary, and he said unto her, “O my Lady, guide thou me in the way wherein I should walk”; and she said unto him, “Go in peace, and God shall be with thee.”  And then, without a ship he passed over the sea of Jericho and came to Debre Tormak in a desert region, and he lived there fighting devils for sixty years; and when he died the angels buried him with praise.  Salutation to Mark.

And on this day also died Theodore, the son of David, King of Ethiopia.  This saint was brought up from his earliest years with wisdom and admonition, and he learned all the Books of the Church, and then he practised horsemanship and shooting with the bow until he was a strong and full-grown man.  From his youth up he was bound with the love of God and he used to give away all his possessions to the poor and the beggars; and he used to visit the churches.  He fought the spiritual fight with fasting and prayer, he married only one wife, and he neither oppressed nor defrauded any man.  When he meditated going to Jerusalem, he consulted Abba Mark, and he said unto him, “It is not thy portion”; now he knew this by the Holy Spirit.  When he was dead, and they were taking him [to the tomb] in a month of winter, the waters of a full river were divided on this side and on that, and where they buried him a fountain of water appeared, and it existeth to this day.  Salutation to Theodore, the son of the Lion.