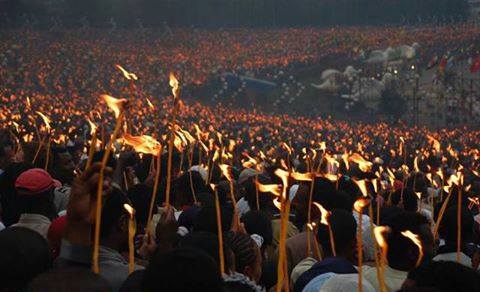 On this day was born Saint John the Baptist, than whom none born of women was greater.  He it was whom our Lord Jesus Christ praised, and he it was who bowed to Him when He was in his mother’s womb, and it was meet for him to lay his hand upon the head of the Son of the Living God.  And the Holy Gospel saith:  When the days of the conception of Elisabeth were fulfilled that she should bring forth, she brought forth a son.  And her neighbors and kinsfolk heard that God had multiplied His mercy to her and they rejoiced with her.  And when the eighth day came one arrived to circumcise the boy, and he called him by the name of his father Zacharias, but his mother said, “Nay, he shall be called ‘John.’”  And they said unto her, “None of thy kinsfolk is called by this name,” and they made a sign to his father and said unto him, “What dost thou wish him to be called?”  And he wrote, saying, “His name is John,” and his father’s mouth was opened, and his tongue was loosed from his dumbness.  And he praised God, and prophesied concerning his son, that he should be called the “Prophet of the Highest,” and that “he should go before the face of the Lord to prepare His way.”  And when his second year was completed, the stargazers came, and Herod killed the children; and one informed Herod about this prophet, and his soldiers searched for him to kill him.  And his father Zacharias took him, and carried him on his shoulders, and he asked the soldiers to come with him into the place where he lived.  Then he took John, and the soldiers came with him, until he went into the sanctuary, and then he laid him upon the horn of the altar, and said unto them, “Take him from here.”  And the angel of God caught up the child, and carried him to a desert, the name of which is Zipata.  And when the soldiers could not find him they became very angry, because the father and the child’s mother had made them to lose him; and they killed Zacharias his father.  And John the Baptist dwelt in the desert until God commanded him to come to the desert of the Jordan, and to preach the baptism of our Lord Jesus Christ, and to reveal himself to the people of Israel, even as Malachi the prophet prophesied concerning him, saying, “That preacher is an angel before the Redeemer, and is in truth the similitude of the angels.”  He was full of the Holy Spirit when he was in the womb of his mother, and of him it was said, “he shall dwell in the desert, and he shall neither eat bread, nor drink wine, all the days of his life.”  And our Lord Jesus Christ was a witness concerning him, and he knew not a woman, and he committed no sin, neither great nor little.  And he preached our Lord Jesus Christ, and he saw the Holy Spirit descending upon Him from heaven, and he received the crown of martyrdom, which, in truth, is incorruptible in the kingdom of the heavens.  Our Lord Jesus Christ saith, “Among those born of the offspring of women there is none greater than John the Baptist” (Matthew xi, II).  Salutation to thy birth, O John the Baptist.

And on this day also Martha and Mary became martyrs, and Gebre Christos, the monk, is commemorated.

And on this day also died Abba Geran, the fighter, who dwelt in an island of India.  This saint feared God greatly, and he loved giving alms and prayer, and God heard every petition he made to Him; and by his prayers he removed from that country pestilence, and scarcity, and captivity, and the shedding of blood, and the sinking of ships; whatsoever he asked from Him he obtained.  And when Satan saw that heavenly grace was given unto him, he became jealous of him, and he came to him in the form of a beautiful woman, who was arrayed in the apparel of kings, and was bedecked with precious stones and pearls; now she was walking by herself.  And when he saw her he went to her and asked her concerning her business, and she said unto him, “I am the daughter of Serseban, the king.  My sister having committed folly with her father’s slaves, my father wished to kill all of us.  Because of this I came forth by night and arrived in this desert, and praise be unto God that a holy man hath found me, that is to say, thyself.”  And he said unto her, “Get thee into a rock so that those who come unto me may not see thee.”  And during the night she came to him, pretending that she was frightened of wild animals, and she cried out to him to open unto her the doors of his cell.  And having opened unto her she came in to him, and slept by his side, and she embraced his body, and she spoke unto him with words of endearment until his heart inclined to love for her. And straightway grace was taken from him, and his eye became black, and he did not look at her again.  Then having roused himself from the drunken stupor of error, he knew at once that he had sinned, and that the woman was one of the deceits of Satan, the accursed Adversary, by whom he had been overcome.  Then he wrote down what had befallen him, and everything which he had done in the body, and he took one of the stones on the island, and he beat his breast therewith continually until he died.  And his soul departed to everlasting life.  And then the people of that district came, according to their wont, to be blessed by him, and when they found him not, they went through his habitation, and found him lying prostrate; and it seemed to them that he was sleeping, but when they tried to wake him they found that he was dead.  Then they kissed him, and prepared him for burial, and they buried him in the earth.  And they found the writing wherein he had written what had happened unto him through the operations of Satan, and what were the reasons for his death.  Salutation to Abba Geran.