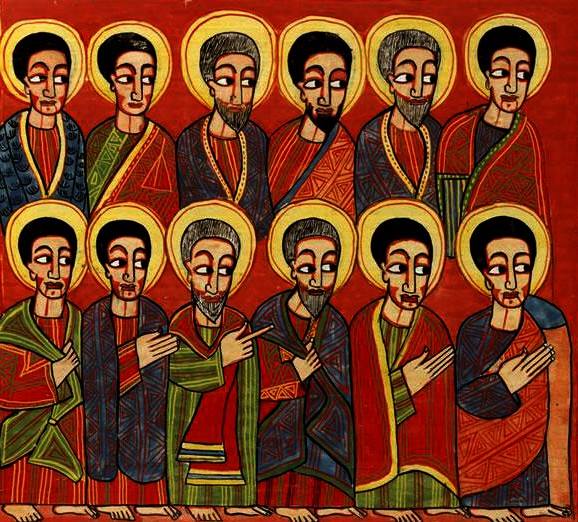 On this day died Nahum the prophet.  This holy and righteous man was of the tribe of Simeon, and he was in prophecy the seventeenth from Moses the prophet.  This righteous prophet prophesied in the days of Amos, the son of Yodae and he was also named Iyoas in the days of Uzza his son.  And he rebuked the children of Israel because of their backsliding and because of their worship of idols, and he revealed in his prophecy that although God the Most High is merciful and compassionate, and abundant in mercy, yet will He take vengeance upon His adversaries, and upon those who are His enemies and heap up judgment for them.  And he prophesied concerning the preaching of the Holy Gospel, and concerning the apostles who should preach it, and he called them “heralds of good things” and “preachers of peace.”  And he prophesied concerning Nineveh and how waters and fire would destroy it and lay it waste.  And it came to pass even as he prophesied, for God made a great earthquake to take place in it, and a fire broke out in it and burnt up the half of it, and those who had turned from the path of righteousness and worked iniquity died.  Now upon those who continued steadfast in their repentance before God no evil whatsoever came.  And having finished his prophecy and pleased God by his work he died in peace.  Salutation to him that preached the coming of the God Whose path from Sina (Sinai) was in the earthquake.

And on this day also Saint Isidore became a martyr.  Salutation to Isidore the blessed martyr.

And on this day also the blessed Eugenia became a martyr.  This holy woman came from Rome, and her father’s name was Philip.  there was an emperor in the city of Rome who was an infidel and worshipped idols, and whose name was Mamdeyanos, and her father was a worshipper of idols.  This holy woman was born in the city of Alexandria and her mother was a Christian, and taught her the Christian Faith, and when she was grown up [her father] betrothed her to a great nobleman.  When her father told her this she said unto him, “Permit me first of all to go forth into the desert of Alexandria, and let me open my eyes, and rejoice in the sight of the monasteries.”  When her father heard this he assigned two eunuchs to her, and permitted her to do what she wished.  And she went out into the desert and traveled about to the monasteries of the monks, and she came to a church where there was a holy and righteous bishop whose name was Theodore.  And when she had come in to him she told him everything, which was in her heart, and she and her eunuchs were baptized.  And she became a monk there and the abbot called her name “Eugenius,” not knowing that she was a woman.  When she did not return to her father he searched for her everywhere, and when he did not find her he made an image in her likeness, and he continued to worship it evening and morning.  After she had dwelt there one year, the abbot of that religious house died, and the monks chose Eugenius, and appointed her in his place.  And God gave her the gift of healing, and she could cast out devils, and open the eyes of the blind; and a certain woman who had a devil in her came to her, and Saint Eugenius healed her.  After this Satan cast an evil lust into the heart of a certain woman so that she spoke to Saint Eugenius, and asked him to abandon his ascetic life and marry her.  And Saint Eugenius hearkened unto her voice and said unto her, “Get thee from me, O my mother, for Satan hath afflicted thee.”  And having been put to shame the woman departed to the governor of Alexandria, and she said unto him, “When I visited a certain religious house a young man came unto me by night, a monk, and he wished to put me to shame, and when I cried out to my slaves and to my handmaidens, he departed from me.”  When the governor, the father of Eugenia, heard this he commanded the soldiers to bring the monks before him bound in fetters.  and when they arrived he handed them over to another governor to punish in his house, and some of them died.  And when Saint Eugenius saw the miserable condition of the monks she said unto the governor, her father, “O my lord, swear unto me that if I tell thee the mystery which concerns me that thou wilt not hold me back from my desire.”  And when he had sworn to her she took him into a secret place and showed him her mystery, and told him her desire and that she was his daughter Eugenia.  When the governor heard this he said unto her, “Art thou indeed Eugenia my daughter?  I will believe in thy God.”  And straightway he commanded them to set free the monks and to bury those who were dead.  And her father and her mother and all the men of her house were baptized in the Name of the Father and the Son and the Holy Ghost, One God, and became Christians. When the men of Alexandria saw the Faith of Philip, they enthroned him archbishop on the throne of Mark, and he sat for many years, and taught the Faith of Christ.  And another governor, an evil man (or heretic), sent his soldiers to kill Philip secretly whilst he was praying in church; and they killed him and he became a martyr.  And when the Archbishop of Rome heard the story of Saint Eugenia, he received her into his house and made her abbess of the religious house which he had built, and which contained three thousand women, and three hundred nuns who were virgins; and the two eunuchs who were with her he made bishops of the cities.  And the governor seized Saint Eugenia and tortured her with divers kinds of tortures, and at length she delivered up her soul and became a martyr, for the Name of our Lord Jesus Christ, to Whom be praise!  Salutation to Theodore and to Eugenia.

And on this day also Saint Victor of the city of Shaw, in the district of Asyut, became a martyr.  The name of the father of this holy man was Marmar, and the name of his mother was Martha, and they were righteous folk and they served God without fear.  Now they had no son, and they prayed for one continually, and gave large alms to the poor and needy.  And God heard their petition, and that year the blessed woman conceived this blessed Victor, and she brought him forth on the ninth day of Genbot (May-June); and she brought him up most carefully and piously in the fear of God.  When he was twenty years old his father took him to the emperor, and the emperor made him a judge in his father’s stead; now his father was far advanced in years.  Then after a few days there arrived the Edict of the Emperor Diocletian to the governor of Ansna (Asna or Esneh), ordering him to kill the Christians who would not worship the gods; and the governor himself came to the city of Shaw, seeking for Christians.  And certain men informed against Saint Victor, and told the governor that he worshipped Christ . . . in sincerity, and the governor forthwith ordered his soldiers to bring him to him; and they did so and set him before him.  And the governor tried to force Saint Victor to sacrifice to the gods, and when he refused to do so, he commanded his soldiers to bind him in fetters in the prison house.  And as he was praying there the angel of the Lord, Saint Michael, came down to him and carried him up into heaven; and when the keeper of the prison house missed him he was exceedingly disturbed.  And after three days he found him, and took him to the governor who took him to the Emperor Diocletian, he himself being pitiful and tender-hearted concerning him, so that he might turn him from the worship of God.  And having become weary and being unable to make Saint Victor consent, he sent him and deposited him with the governor Eutychianus, saying, “I have sent him to thee.  If he offers sacrifice to the gods [good and well], and if he will not, hesitate not to kill him.”  Then the soldiers tied his hands and his feet, and put an iron gag in his mouth, and he commanded them to put him in the hold of a ship; and they took him away.  Whilst he was there the angel of the Lord came down and released him from his fetters.  Then they brought him before the governor, and the saint kept silent before the governor as before the wicked emperor; and straightway the governor was wroth and condemned him to be tortured severely, and chained him in the prison house.  Whilst he was there our Redeemer appeared in a chariot of light, and made a covenant with him.  And from that day the saint performed many signs and miracles, and healed all the sick. When the governor heard this he was wroth, and commanded his soldiers to bring him to him, and he treated him kindly and urged him [to worship the gods]; but the saint reviled him and cursed his filthy gods.  And straightway he commanded them to tie him to a horse’s tail and drag him about for one day, and after that they threw him into the furnace which heated the baths, and he finished his strife nobly.  Now they could not bring his body out from the bath furnace, so they went down the steps, and wrapped it up in costly cloths and anointed it with scented unguents and they built a church over it.  Salutation two-fold to Saint Victor.

And on this day also are commemorated Philip, and Ananias, and Barachus, and John, and Philip, the father of Eugenia the martyr.

Salutation to Eugenia who pretended that she was a eunuch for the sake of Christ, and who appeared to be like the monks her fellows.