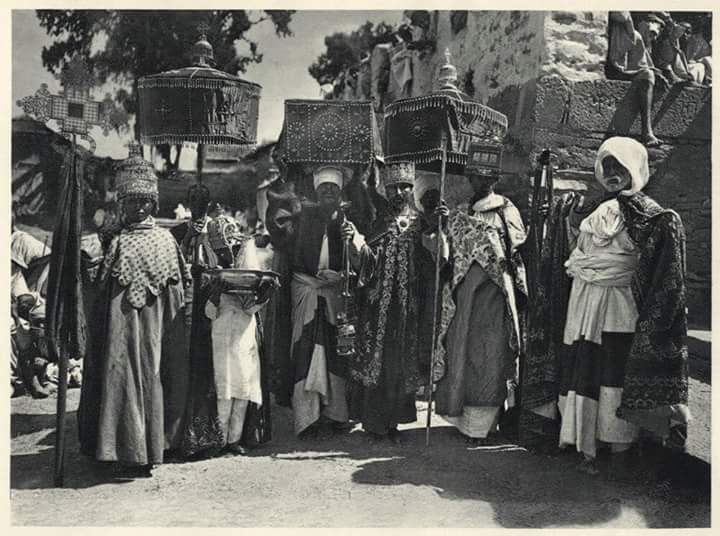 On this day Saint Basofreyos (Parsnuphis) became a martyr in the days of the Muslims. This blessed man became a monk in the church of Gabriel the Archangel, in the city of Mesr (Cairo), on the banks of the river [Nile], and he fought a great fight therein, and he disputed with the Muslim Shekhs concerning the True Faith, and he made manifest to them the Godhead of our Lord Christ.  And because of this the Muslims were wroth with him, and they tortured him severely, and cut off his head with the sword, and he received the crown of martyrdom in the kingdom of the heavens. Salutation to Befsufyos.

And on this day also died Saint Abracius.  This saint was a man of Upper Egypt, and he put on the garb of the monastic life when he was twenty years of age, and he fought a great and a good fight. And when Satan grew tired of setting himself in opposition to him [secretly], and of being overcome when he fought him, being unable to effect anything against him, he came to him openly, face to face, and said unto him, “There are left unto thee of thy days fifty more years,” wishing by these words to cast the saint into despair.  And the holy elder answered and said unto him, “Thou hast made me sorrowful; I was thinking that I had another hundred years to live, and therefore I was weary.  But if it be truly as thou sayest, it behooves me to fight before I die.”  And then he fought strenuously and increased the strictness of his ascetic life, but he died that same year and departed to God; and he ended, the seventieth year of his life still fighting.  Salutation to Abracius.

And on this day also Saint Hannah conceived our holy Lady the Virgin Maryam, the God-bearer.  Salutation O blessed Hannah to thy conception!

And on this day also is commemorated Abba Makari (Macarius), who fed upon partridges.  This father Makari (Macarius) sought from his youth to follow the Living God, and he learned the Books of the Church, and he knew that this fleeting world would come to an end, and that there was a reward for the just and a punishment for sinners.  Therefore he forsook the world and became a monk in a monastery.  Thence he went forth into the desert, a journey of ten days, and he came to a monastery about which there was nothing except roots and partridges; and water in abundance was there.  And straightway he pondered and said, “If I go out into the fields after the partridges my labor and my prayers would be in vain, for I have, since I am alone by myself, no one to come to my help.  And as for him who saith, ‘Thou shalt not eat flesh,’ is it not the flesh of thy neighbor [to which he refers] in derision?  And God knows that I have nothing else to eat except these [partridges and roots].”  And from that day he began to net the partridges, and each day he netted one and cooked it with herbs, and thus fed himself with what God had given him, and he drank of the water there and gave thanks; and he prayed, and made supplication to God, and kept vigil all the night.  And he continued to do this for many years, and he never heard the voice of a man, and he never saw the face of a man, and he never spoke to a man, and he neither reviled nor abused anyone; and he used to say, “Satan only makes his appearance with man.”  And after this a certain monk from Constantinople came to the place where Saint Makari (Macarius) was living, seeking [in] the desert [for him].  And when he was Abba Makari (Macarius) netting the birds he could not contain himself, but he made haste to slay his brother with calumny.  And the [monk from] Constantinople came to the archbishop, and he went in to tell him everything which he had seen, [saying], “I went into the desert to look for the caves [of the monks], and there I saw a monk living by himself and netting birds so that he might eat flesh, and so disgrace us when the people saw what he was doing.”  When the archbishop heard these words he sent away that monk with a messenger so that he might know all that had happened, and find out if what the monk who had gone to him had told him was true.  And before the two men had arrived, and whilst they were still on the road, Abba Makari (Macarius) went to net partridges according to his wont, and he netted three birds in one net.  And he thought, saying, “Hath God given me these [three] birds to try me?  Hath not my belly been satisfied (or filled) up to this day?  [They must be] for others, but I have never seen any man in this desert.”  Whilst he was thus thinking the two monks who had been sent by the archbishop arrived, and when he saw them, he rejoiced, saying, “I thank Thee, O God Who hast given me food for Thy servants, Thou knowing well my poverty.”  And they nodded to him as he brought the table towards them, and he said unto them, “Take, O my brethren, and sit down.”  And he seized his vessel and ate silently and without a word until he had finished, according to his wont, and he finished without a word.  And the two monks refused to eat, and they said unto him, “We do not eat flesh for we are monks, and there is laid upon us the prohibition to eat flesh.”  And Abba Makari (Macarius) left them and did not force them, and he took the birds which he had cooked and blew upon them three times, and they flew up into the air and went back to their nests as if they had never been netted.  When the two monks saw this miracle they bowed down before him and said unto him, “Forgive us, O holy one of God; we have sinned and gone astray concerning thee.”  And he said unto them, “It is God Who shall forgive you your sins, for I am sinner”; and when they saw this they marveled and went back to their country and related all the miracles of the saint, which they had seen.  And the archbishop heard this, and, wondering, he went to the emperor and said unto him, “Behold, a righteous monk hath been found in our days, come, let us go to him so that we may receive his blessing.”  And the emperor rose up with his soldiers, and with him were the archbishop, and bishops, and priests, and deacons, and when he came nigh unto him, an angel took the saint and lifted him up to carry him to the Country of the Living; and when the emperor saw him going up he said unto him, “Bless us, O saint of God, and speak one word unto us.”  And the saint said unto them, ”Let your tongues fast from the words of calumny.  If a priest doth not learn from books, overmuch pride and boasting will not come upon him; and if a monk doth not learn too much, arrogance will not come to him.  Love ye one another, and God be with you all.”  And thus saying he ascended before them.  Salutation to Makari (Macarius).

Salutation to Rufa’el, the healer-angel.  [This salutation is wanting in the Bodleian MS.]