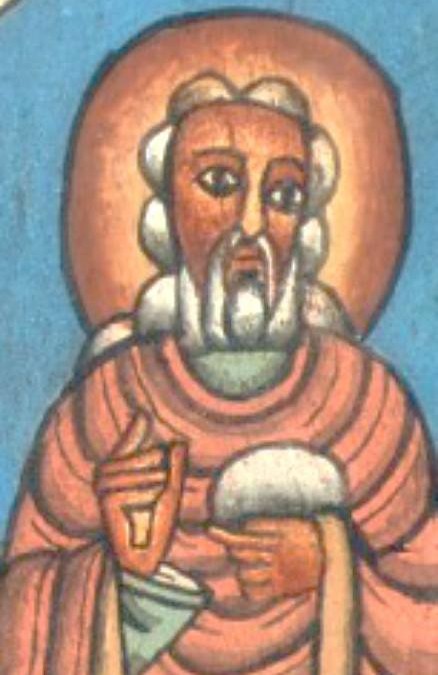 On this day died Gideon, one of the judges of Israel. This just man Gideon was of the tribe of Menasseh and his father’s name was Joas; and the angel of the Lord appeared and helped him, and strengthened him, and made him judge over the children of Israel. And he commanded him to destroy the altar of idols, and to build an altar to God, and to offer up burnt offerings upon it; and Gideon burnt with fire the wooden idols, which were broken in pieces, and he did as the Lord commanded. And God also commanded him to make war upon the men of Midian, and he asked God to show him a sign, so that his heart might be strengthened thereby. And this was the sign: [He said] “Let me lay the carded woolly fleece of a sheep among the grass of the field; if the fleece be wetted by the dew and the grass of the field is not wetted, then shall I know that Thou art with me.” And he laid the fleece among the grass, and it was wetted, but the grass was not wetted. And on the following day he said, “O my Lord, behold I will lay the fleece among the grass again; if the grass be wetted and the ground, and the fleece is not wetted, then I shall know that Thou art with me and that Thou wilt fight for me.” And he did this on the following day, and it happened even as he wished. Then his heart waxed strong, and the spirit of power descended upon him from God, and he blew a horn and all the children of Israel gathered together to him. And God said unto him, “The people are too many, for when they conquer their enemies they will say that they themselves have conquered them by their own power. But let a herald go round about among them and say, ‘If there be anyone here who is timid or afraid, let him depart’”; and when the herald had been among these there turned back twenty-two thousand of the children of Israel. And then God said unto Gideon, “Even now those who are left are too many. Send them to the water and command them to drink water, and he who drinks water with his tongue like a dog, take all these, and set them apart from those who remain.” And straightway Gideon took them to the river, and they drank water as God commanded, and the number of those who drank water with their tongues like dogs were three hundred men. And God said unto him, “With these I will deliver thee, and I will give the men of Midian into thy hand.” And that night they blew trumpets among them, and they said, “The army of God and of Gideon.” And when the men of Midian heard the sound of the trumpets, God set fear in their hearts, and they were terrified and took to flight. And each man killed his neighbor next to him, and they slew their princes Oreb and Zeeb, and they slew two of their kings Zebhel and Zalmunna, and they slew of the men of Midian one hundred thousand, and twenty thousand horsemen; and the children of Israel rejoiced that day. And they said unto Gideon, “Be thou king over us, and thy children after thee.” And he answered and said unto them with lowliness of heart, “Neither am I worthy to be king nor are my children worthy to be kings over you, but it is God Who shall rule over you [as] king. But let each one of you give me the torque of gold which is on the head of every camel which ye have carried off as spoil”; and they brought them to him. And the amount of gold and silver which they gave him was one hundred thousand seven hundred dinars, besides the ornaments of the women, and the rich trappings which were on the camels. And Gideon, the just, continued to rule the children of Israel for forty years, and God was with him in all his work; and then he died in peace and was buried in the grave of his father.

Salutation to Gideon, the mighty man. By the miracle of the wetted fleece mentioned above is made manifest the Birth of Christ of Mary.
Glory be to God Who is glorified in His Saints. Amen.