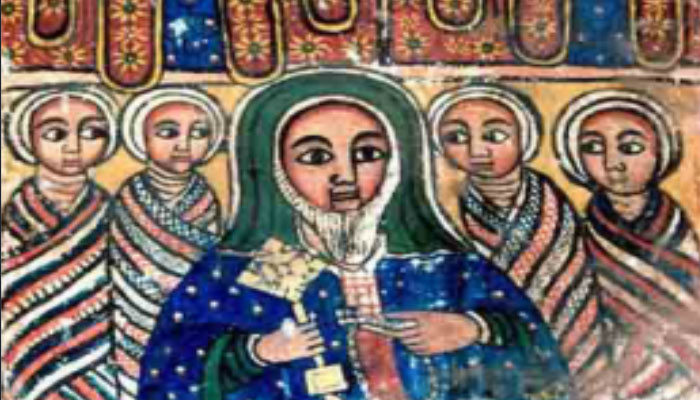 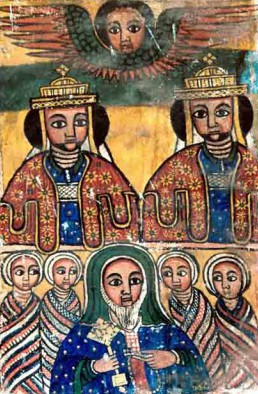 On this day is commemorated Abba Salama, the revealer of the light, for he was the light of Ethiopia; and behold the story of his strife is written in the section for the twenty-seventh day of the month Hamle.  Salutation to Abba Salama.

And on this day also took place the translation of the body of the great Saint Titus, the Apostle, the disciple of Paul the Apostle.  Constantine the Just, the great emperor of emperors, translated the body from ‘Akrates (Crete) to the city of Constantinople.  When by the Will of God, Constantine reigned, he took very careful thought for the churches and the works thereof, and he beautified with fine decorations all the churches, which were in his kingdom, and especially those in the city of Constantinople, for, that was the seat of his sovereignty.  And he inspected every work, and he wished [the builders] to beautify them with every kind of decoration, and with pearl-stone (mother-of-pearl), and costly stones; and he also made them glorious with spiritual stones and celestial gems.  And the bodies of the apostles were gathered together to him, and such of the bodies of the honorable martyrs as he could find.  And when he heard that the body of Saint Titus the apostle was in the city of ‘Akrates (Crete) he sent the chief priests, and with them much money, and they took the body of Saint Titus with great honor, and brought it to the city of Constantinople.

And he built a beautiful church, and he placed the body in a coffer of very precious stone, and laid it in the church.  And God made manifest many exceedingly great signs and miracles through it.  And as they were carrying Saint Titus to bring him into the sanctuary, the end of the stone coffer dropped upon the foot of one of its carriers, and crushed it, and the bones thereof.   And that man took some of the oil of the lamp which was hanging before the picture of Saint Titus in faith, and he smeared his foot therewith and tied it up, crying out by reason of the pain as he did so; and as he could not walk home to his house, he passed the night by the side of the coffer containing the saint.  And on the following day he unbandaged his foot to look at it, and to apply the means of healing to it, and he found that it was sound and well like the other, and there was no pain in it whatsoever, and he found on it only traces of the marks of blood; and all those who saw this miracle marveled exceedingly, and they glorified God.  And the man rose up and washed away the blood, and he walked about as usual without any pain, and he glorified God.  And the miracles of this holy Apostle Titus were many.  Salutation to the translation of the body of Titus the disciple of Paul.

And on this day also are commemorated Farkayon, and Silikion, and Galinicus, and ‘Eunas, and their companion who were martyred; and the translation of the bodies of ‘Arsis, and Dacia, and Dimon; [‘Arsis, Dacia and Dimon are not mentioned in the Bodleian MS.] and the translation of the body of Thomas the Apostle.  And countless signs appeared through his body, and they built a beautiful church for him on the river, and they laid the body of the saint therein.