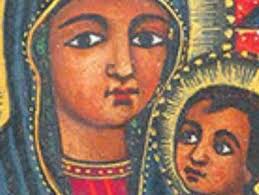 On this day is celebrated a commemorative festival of our holy Lady the Virgin Maryam, the God-bearer. Salutation to Maryam, who found seed without drinking the dew, and without drinking from the fountain, and who appeared unto Isaac from out of her icon.

And on this day became a martyr the holy apostle and great prophet Barnabas, which name, being interpreted, means “son of consolation.” This blessed and holy man was from the country of Cyprus, and was of the tribe of Levi, and his original name was Joseph. And the Lord chose him to be of the number of the Seventy-two disciples, whom He sent out to preach before His Passion, and He called his name Barnabas. Then the Holy Spirit Paraclete descended upon him when he was in the chamber of Zion with the Apostles, and he preached the Name of our Lord Jesus Christ. And he owned a garden, and he sold it and brought the price thereof and gave it to the Apostles. And when Paul the Apostle believed, and our Lord Christ was mingling with the Apostles, and many of them did [not] believe that Paul was a disciple of Christ, this Barnabas came to the Apostles and brought Paul unto them. And he became a witness to them on his behalf that Paul was a disciple of our Lord Christ, and he told them how our Lord Christ had appeared unto him and talked with him. And Barnabas went with Paul to many cities, and they preached in the Name of our Lord Christ. And the Holy Spirit said unto the Apostles, “Separate ye for Me Barnabas and Saul for the work.” And when they came into the city of Lystra and preached, and Paul healed the paralytic who was therein, this Barnabas was with him. And when the men of the city wished to offer sacrifices to them, and called them “gods,” they would not accept the honoring of me, but they rent their garments and confessed that they were men even as they were. And after Barnabas had gone with Paul to many cities, he separated from him, and he took Mark with him to Cyprus, and they preached there, and converted very many of the men thereof to the True Faith of Christ, and baptized them with Christian baptism. And the Jews of the country of Cyprus became envious of him, and they made accusations against him before the governor, and before those who were in authority. And they seized him and gave him a severe and painful beating, and then they stoned him with stones, and then they dragged his body out from under the stones, and they burnt him with fire and he finished his martyrdom. And the Apostle Mark the evangelist was with him, and God kept him and preserved him to preach in the city of Alexandria and in all the regions round about it. And they took out [the body] of Saint Barnabas from the fire, and he was whole and uninjured, and the fire had not touched him at all, and they carried him out, and swathed him in costly cloths, and laid him in a cave outside the city of Cyprus. Salutation to Barnabas and salutation to Mark. Salutation to our Shepherd like Whom there never hath been any and never shall be any.