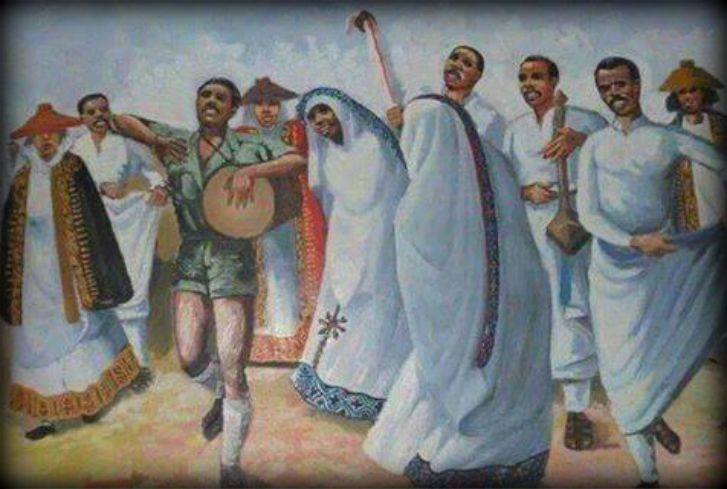 On this day is celebrated the festival of the glorious angel, Gabriel the Archangel, who made the Annunciation [to our Lady Mary].  And on this day is celebrated the building of the church in the city of Danah, wherein the angel showed forth his miracles, and also the dedication thereof; and of what took place Archelaus, bishop of this city is witness.  It was this glorious angel who was sent by God to the holy Virgin Mary, and he was by far the most glorious of all the angels, and most to be trusted to make the Annunciation to her.  When he came unto the Virgin he said unto her, “Peace be unto thee!  Rejoice, O thou who art full of grace!  The Lord is with thee.”  And it was Gabriel who announced the glad tidings of the birth of his son John to Zachariah; exceedingly great honor do they pay to this angel Gabriel, and great is the honor of him that is chosen as an announcer of glad tidings.  And it is meet for us now to gather together at this great and holy festival in the True Faith, and let us put away hatred, and make peace among ourselves, and agree with our neighbor, and love each other, and let us crucify our minds (or thoughts) with God the Merciful, so that He may look upon us and have compassion upon us.  And with all our hearts let us make supplication to this glorious angel Gabriel, and his companion Michael, who are glorious and exalted in their offices to pray to God on our behalf that He may deliver us and protect us against the nets of Satan; for without the help of God and the intercession of His chosen ones we can in no wise be saved.  Now the meaning of the name Gabriel is “God and man,” and it was Gabriel who made the announcement [to the shepherds], and said, “This day is born unto you a Savior, Who is Christ God.” Salutation to thy house in the city of Danoh (sic), O Gabriel, which Archelaus, bishop of the city, consecrated.

Salutation to Dekesius, Bishop of Telteya, to whom Mary gave heavenly apparel, because he wrote the account of the miracle of her Annunciation.

And on this day died the holy father Abba Anastasius, the thirty-sixth Archbishop of the city of Alexandria.  This holy man was the son of a nobleman of the city of Alexandria, and he was a judge in the royal palace; he was next made a priest of the Alexandrian Church, and by the Will of God he was appointed archbishop.  And having been appointed this father took thought for the churches, and he built several churches, and he set in them places for the bishops and priests.  And he took many churches from the Melchites, now he knew not their number, and some churches of the Jacobites, because he was held in honor among them for his learning, and faith, and virtues; and he converted many of them to the True Faith.  In those days the Emperor Constantine died, and he was succeeded by another emperor whose faith was corrupt.  And one of the evil men sent a letter, and made an accusation against this holy father to him, saying, “When Anastasius, Archbishop of the Jacobites, goeth through the church, the people anathematize the emperor and his faith, and this father Anastasius (Antonius?) doeth nothing in the matter.”  When the emperor had read the letter of this evil man, he was exceedingly angry, and he sent to the governor of Alexandria and commanded him to take from this holy father Anastasius the church of Saints Cosmas and Damianus, and all his possessions, and to give them to Eusegnius, Archbishop of Rome.  And this father sorrowed greatly by reason of this, but God, Who searches hearts, comforted him, and destroyed Peter the heretic, Archbishop of Antioch, and He appointed to succeed him a righteous and learned monk whose name was Atesius.  And this father sent to him an epistle concerning the True Faith, and he rejoiced at its coming to him, and he gathered together the bishops and the priests and read this epistle before them, and they rejoiced therein, and they marveled at the words which were written there, and at the knowledge of the writer.  And Athenasius, Archbishop of the city of Antioch, rose up, and taking with him bishops, and priests, and deacons, he came to the city of Alexandria. And this father Anastasius went out and met Abba Athanasius, now he had with him bishops, and priests, and deacons and monks, and the chief of the Jews, and then Abba Athanasius said, “O my beloved ones, it is meet that we should take up the harp of David, the prophet, and sing the words of the Psalm, ‘Compassion and truth have met together, righteousness and peace have kissed each other’.  Athanasius and Anastasius have embraced each other, righteousness hath appeared in the land of Egypt, and truth hath sprung up out of the East.  Egypt and Syria have become one Faith, and the cities of Alexandria and Antioch one church, and there is one virgin to one holy man, our Lord Christ, the Only Son, the Word of God the Father.”  And Saint Athanasius lived with Saint Anastasius in the same monastery for a period of thirty days, and they taught each other, and discussed together, and searched out the roots of the Faith; and then Abba Athanasius returned in peace to this own country.  And the country of Alexandria and the country of Antioch were at one in one True Faith.  And this father Anastasius taught his flock things, which were profitable for their souls from the Book of Life.  And because of the greatness of his wisdom, and his knowledge, he used to put at the beginning of each of his writings and letters each year one letter of the alphabet; thus at the beginning of all his writings and letters written during the first year he wrote the letter A, and at the beginning of all those written during the second year the letter B, and at the beginning of all those written during the third year the letter ‘? ‘ and so on to the end of the alphabet.  [Oriental 667 says that he wrote 12,000 letters during the twelve years in which he held office.]  And when the fast of the Birth of Christ came he became a little sick, and died in peace in the thirty-first (sic) year of the Holy Martyrs (A.D. 315?).  Salutation to Anastasius.