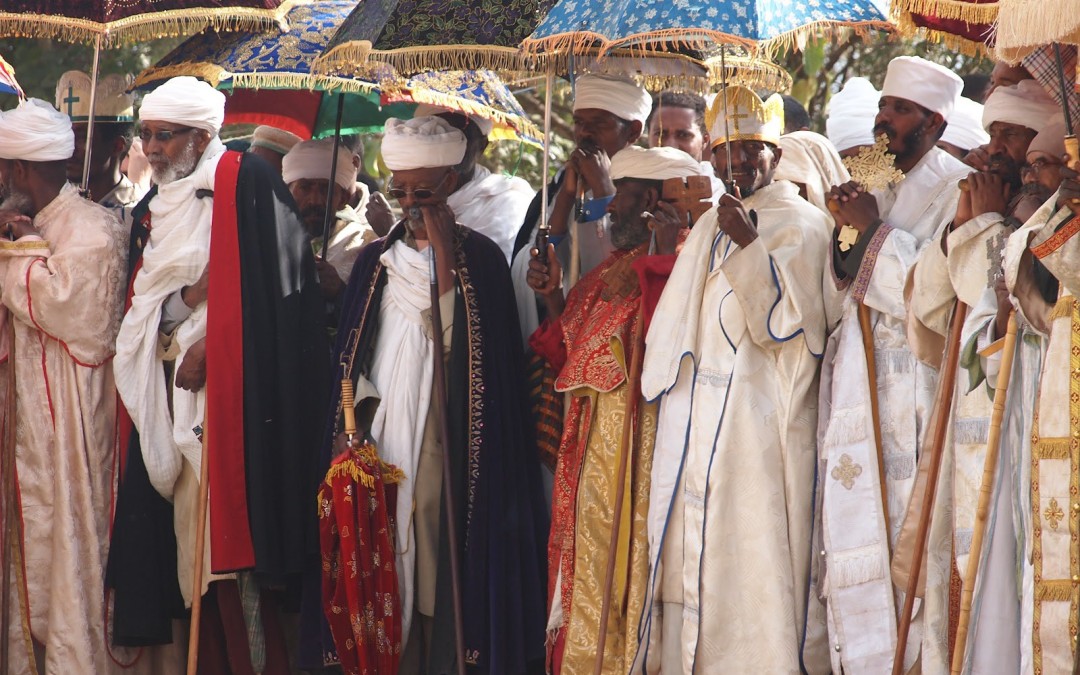 IN THE NAME OF THE FATHER AND THE SON AND THE HOLY SPIRIT, ONE GOD. AMEN.  AMEN.

On this day the great Saint Abba Severus, Archbishop of Antioch, came to the country of Egypt; now this took place in the days of the Emperor Eustathius, who was a wicked emperor.  And the empress was a woman holding the right Faith, and she loved Abba Severus, and she placed in him very great confidence; but the emperor did not turn from his evil counsel and he wanted to kill Abba Severus.  When the God-loving empress knew that the king wished to kill Abba Severus secretly, she besought the holy man to save himself, but he did not want to go away, and he said unto her, “I am ready to die for the sake of my Lord Jesus Christ.”  And the empress urged him with many fervent entreaties, and certain God-loving brethren entreated him also, and he went forth from that city; and certain of the brethren who were with him fled to Lower Egypt.  When the emperor had sought for him and had found him not, he sent soldiers to seek him out and to bring him to him.  And God hid him from them, and they found him not, and yet he was nigh unto them, and he walked about in their midst and they did not see him when he was in that place wherein the soldiers of the emperor lived.  When Abba Severus came to Egypt he went about secretly from place to place and from monastery to monastery, and God wrought by him great signs and wonders.  One day he arrived in the desert of Scete, and he entered into the church of Saint Abba Macarius in the guise of a traveling monk, and at that moment the priest was offering the incense of sacrifice at the altar, and he was censing the people.  Afterwards he read the Book of the Gospel, and then he lifted off the covering and looked for the Offering on the paten, but it was hidden from him and he could not find it.  And he wept, “O my brethren, I know not whether this thing hath happened because of some sin of mine, or because of some sin of yours, but I cannot find the Offering on the paten, and It is hidden from me”; and the people wept because of this.  And straightway the angel of the Lord appeared unto the priest, and said unto him, “This hath not happened because of thy sin, and this Offering hath not disappeared because of the sin of the people, but because thou hast acted stupidly, for thou hast dared to offer up incense and our Offering whilst the Archbishop Abba Severus is standing outside the sanctuary in a corner of the church.”  And the priest said unto the angel, “Where is he?”  And the angel pointed with his hand towards him, and he knew Abba Severus by the grace of the Holy Spirit.  When the priest came to him Abba Severus commanded him to finish the service of the Offering.  After this the priest brought Abba Severus to the sanctuary with great honor.  And when the priest had gone up to the altar he found the Offering on the paten as before, and the priests marveled and praised God.  After this Abba Severus went forth from that place and came to the city of Seha, and he dwelt there with a certain rich man who was a lover of God, and whose name was Dorotheus; and he lived with him until he died on the twenty-fourth day of the month of Yakatit.

And on this day are commemorated Takla Sama’et and Heriacus (Cyriacus?).

Glory be to God Who is wonderous in His Saints.  Amen.