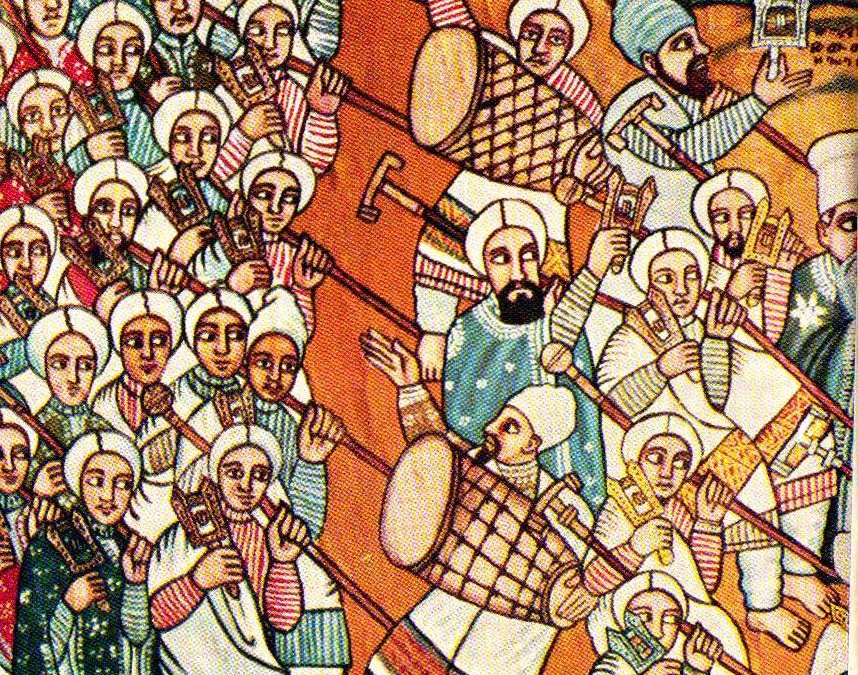 On this day died the holy father Abba Liwaryos (Liberius), Archbishop of the city of Rome.  This holy man was righteous, and excellent, and pure, and a monk from his earliest years, and he grew old in the Ordinances of the Church, in which he was learned; and he fulfilled all the Law and Doctrines of the Church.  And the people chose him and appointed him Archbishop of the city of Rome, and he sat on the throne of Peter the Apostle.  And having sat on the throne of Peter the Apostle, the chief of the Apostles, he followed a righteous course and was well pleasing unto God, the Most High.  And he taught the people at all times, and he admonished those who transgressed the commandments of God, and turned them into the way of God. When Constantine the Less was dead the wicked Julian reigned after him, and this wicked Julian denied Christ and afflicted the Christian people.  And he threatened Saint Basil, saying, “I am going to lay waste the churches of the Christians and destroy them,” but God destroyed Julian the infidel through the prayer of Saint Basil.  It was then that God sent the honorable Saint Mercurius, the martyr, and he destroyed that serpent.  Now Saint Basil stood before a picture of Saint Mercurius, and he said unto him, “This infidel told me that he would destroy the churches, therefore I beseech thee to kill him in the war”; and Saint Mercurius in the picture nodded his head as if to say, “Yea, I will.”  This Julian the infidel was the son of the sister of his father Constantine, and he opened the temples of the idols and afflicted the Christian people, and tortured very many of them.  And this Saint Liwaryos (Liberius) came from the city of Rome to the city of Caesarea, and he visited Saint Basil, and the two agreed together to go to the city of Antioch, and they visited Julian the infidel and turned him from his apostasy and error.  Now these two men had known him from their youth, when they were fellow-learners in school with him; and they rose up and journeyed and arrived in the city of Antioch where the Emperor Julian was.  And having stood up before him they wanted to speak to him and to turn him from his error.  And he said to them, in mockery of our Lord Jesus Christ, “Where did ye leave the son of the carpenter?”  And Saint Basil answered and said unto him, “We left Him making a coffin for thee, and when thou art dead they will bury thee therein in hell.”  And Julian was wroth with them, and he commanded his soldiers to shut them up in prison; and they shut Saint Basil and Saint Liwaryos (Liberius) up in prison.  And Saint Liwaryos (Liberius) saw a vision in his sleep, and in it he was in prison, and Saint Mercurius said unto him, “Verily I will not permit this infidel to utter blasphemies against my God.”  And Saint Liwaryos (Liberius) woke from his sleep and told Saint Basil of the vision, which he had seen; and Saint Basil had also seen the same vision.  Afterwards came the news of the killing of Julian the infidel, and after him Womanyos reigned, and he believed on our Lord Jesus Christ.  And he brought the saints out of prison, and they departed, each of them, to his see.  Now it was Saint Mercurius who killed Julian the infidel at the entreaty of Saint Basil.  And Saint Liwaryos (Liberius) departed to the city of Rome, and he debated fiercely with the followers of Arius, and he excommunicated them and exiled them from his see.  And he followed a righteous course, and was well pleasing unto God, and he died in peace, after ruling his see for six years.  Salutation to Liwaryos (Liberius).

And on this day also, in the nine hundred and eighty-fifth year of the holy martyrs [(A.D. 1269) the Bodleian ms. has A.M. 388], in the reign of Iyob Kher, and in the days when Abba Cyril held office, a stupendous and marvelous thing happened in the world, which terrified those who beheld it, and those who heard thereof on that day.  The sun became dark, and it became darker and darker until the day was like night, and the stars appeared, and men lighted lamps.  And they feared with a great fear, and they begged for His compassion and mercy, which He promised them, and He multiplied His mercy on them.  And He removed fear from them, and the light re-appeared, and the sun came forth according to its custom, and it lighted up the whole world, and men extinguished their lamps.  And the period of the darkness of the sun was one hour, that is to say, from the half of the eighth hour to the half of the ninth.  And additional praise must be given to God because He did not hasten to harm men for their sins, but He made haste to show His compassion and long-suffering towards them; and praise be also to our Lord Jesus Christ forever and ever.  Amen.

And on this day also is commemorated Abba Simeon the Archbishop [or Bishop].

And on this day also Thomas the Apostle began to work like an artisan, and to preach in the country of India where-unto he went with ‘Abnes the merchant.  And ‘Abnes went to salute Guendefor the king, and he told him concerning Thomas the carpenter whom he had brought with him.  And the king rejoiced and said unto him, “What is thy trade?” And the apostle said, “I am a carpenter and an architect.  And I can make walls of houses, and beds, and scales, and wheels (carts?), and ships, and oars, and royal palaces.”  And the king rejoiced, and he took Thomas to a place where he was going to build a palace, and he said unto him, “When wilt thou have built [the house]” And the apostle said, “After two months, [I will begin on] the new moon of the month Khedar, and I will finish in the month of Miyazya”.  And the king marveled and said unto him, “Every house is built in the summer, then how can this house be built in the winter?”  Then the king gave him much money both for himself and for those who were to work with him, and having taken it, he gave it to the poor and needy, saying, “I give what belongs to the king to another king.”  Then the king sent his minister to the apostle to learn if the palace was finished, and the apostle said unto him, “Thy palace is finished, but there remaineth the roof to put on.”  And the king sent him money a second time, and he said unto him, “Finish quickly.”  then when the king came and asked for the palace which Thomas had built, the apostle said unto him, “No palace hath been built; there are only the alms given to the poor of thy goods.”  And the king was wroth, and he shut the apostle and the merchant up in prison until he could think out in what way he should kill them.  That night Gadon the king’s brother fell sick and died, and the angels showed him the palace, which Thomas had built for Guendefor his brother.  He said unto them, “Who is this palace for?”  And the angels said unto him, “This is for the king, and the Apostle Thomas who is in the prison house hath built it for him.”  When his soul returned to him Gadon told his brother this, and then they all vied with each other, and they went to the prison house and brought out the apostle and the merchant.  And they believed on our Lord Christ, and were all baptized, both men and women, in the Name of the Father and the Son and the Holy Ghost, and they received His Holy Body and His Honorable Blood.  Then Thomas laid his hands upon them, and gave them the benediction, and departed from them.

On this day is commemorated David King of Ethiopia, who was called the “fan of the wicked and the wall of adamant.”