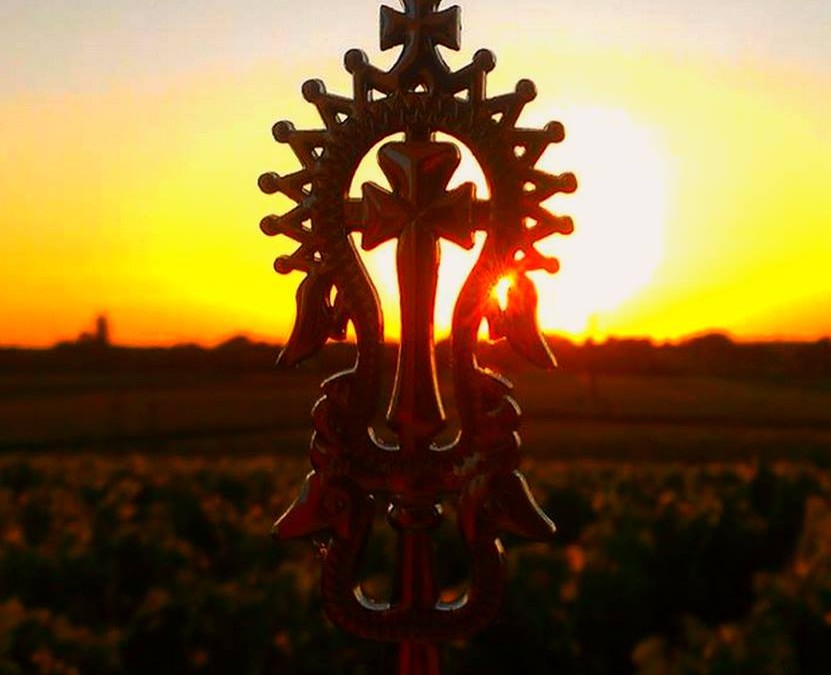 On this day the holy and honorable Bilamon became a martyr. This holy man was a native of Nicomedia; his father worshipped idols and his mother was a Christian. They taught him philosophy and he was well educated, and he passed under the care of a certain priest whose name was ‘Armalus (Harmalus?), and he taught him the true Faith of our Lord Jesus Christ and he baptized him with Christian baptism. And he fought a strenuous fight, and God wrought by his hand great miracles and wonders. And there came unto him a certain blind man so that he might work by his skill some salvation for his eyes, and Saint Bilamon made the sign of the Cross over the eyes of the blind man, saying, “In the Name of the Father and the Son and the Holy Spirit,” and his eyes were relieved straightway, and he could see with them as in former times, and he was healed. When the king heard the story of the blind man who was healed of his sickness, he had him brought into his presence, and he said unto him, “Who was it that healed thine eyes?” And he said unto the king, “Saint Bilamon healed me by laying his hand upon my eyes, and making the sign of the Cross, and saying, ‘In the Name of the Father and the Son and the Holy Spirit,’ and straightway I saw the light.” And the man who had been blind and had been healed cried out before the king and said boldly, “I am a Christian.” And the king ordered his soldiers to cut off the head of the blind man, who had been healed, and straightway they cut off his head with the sword, and he received the crown of martyrdom in the kingdom of heaven. Then the king sent and had Saint Bilamon brought to him, and enquired of him concerning his Faith, and he confessed boldly before him and said unto him, “I am a Christian.” And the king tried to seduce him by means of much persuasion, and he promised him very many things, but the saint had no desire for any of the things, which he promised him. Then was the king wroth with him, and [he cried out] with a loud voice, saying, “If thou wilt not hearken unto my voice I will inflict upon thee severe torture.” And Saint Bilamon answered and said unto him, “I am not afraid of thy torture.” And straightway the king tortured him with severe tortures for many days, by applying one torture at a time, by beating, by suspension (i.e., crucifixion), by casting him into the sea, and into the fire. Whilst he was suffering these great tortures our Lord Jesus Christ appeared unto him in the form of ‘Armalus (Harmalus?) the priest who baptized him, and he heard His voice, which was full of joy, saying, “O My chosen one Bilamon, I have made ready for thee and the heavenly joy which is for ever.” When the king’s soldiers heard this word of joy, they believed on our Lord Jesus Christ, to Whom be praise and glory! And they drew nigh unto the king, and they cried out, saying, “We believe on our Lord Jesus Christ, the Son of the Living God.” And straightway the king commanded his soldiers to cut off their heads with the sword, and they did so, and at the same time they cut off the head of Saint Bilamon, and they all received the crown of martyrdom in the kingdom of the heavens. Salutation to Askir and Cyriacus. Salutation to Silas the disciple of Paul. Twofold salutation to the Apostles of the Father. And on this day also five hundred and sixty people who formed the company of Saint Pantaleon became martyrs. And on this day also died Salation, and ‘Atrakius, and Abba Yarpes (Iphrasius), and Andronicus, and Armolius (Hermolius), and Hermes, and Harmoktis, and the holy women Admania and Samata, and Father Isaiah, and Silas the disciple of Paul. Glory be to God Who is glorified in His Saints. Amen.