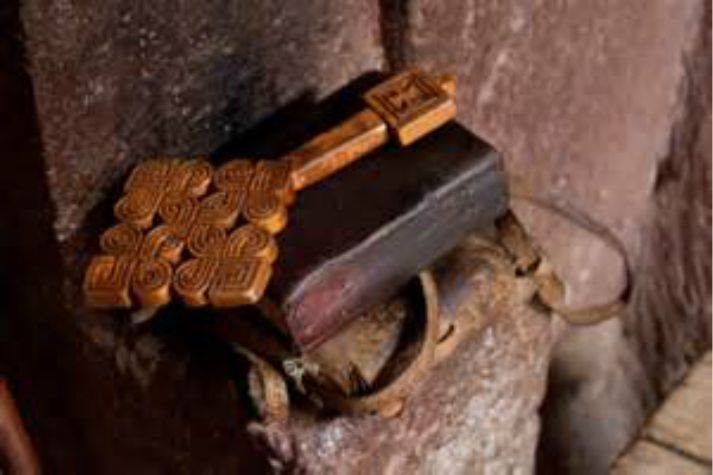 On this day died the holy father, Abba Agathon, the thirty-ninth Archbishop of the city of Alexandria.  And they chose this father to be archbishop, and they took him and bound him, and they appointed him Archbishop of the city of Alexandria, when Abba Benjamin, the archbishop who preceded him, died.  And great tribulation came because of the Orthodox Faith.  In his days there was a certain man whose name was Theodosius, a Melchite, and he went and came to the city of Damascus, to King Yazed, and he gave him presents and much money, and Yazed appointed him governor of Alexandria, and the North, and Mareotis.  When he came to the city of Alexandria he afflicted our father Archbishop Agathon, and he levied tax upon him, and he took from [each of] his disciple’s thirty-six gold dinars.  And he compelled Agathon to give him money for the service of the emperor’s ships each year, and the archbishop gave seven hundred gold dinars each year.  Now because of the evil of this man Theodosius, his fellow Melchite did not associate with him, for he hated him because of the evil, which he did to the Archbishop Abba Agathon.  And our father the archbishop was not able to go out of his cell until God had destroyed that evil man.  And in the days of this father the building of the holy church of the blessed Abba Macarius was completed.  One night the angel of the Lord appeared unto this father, and he made known to him that in the country of the Fayyum there was a certain righteous monk whose name was John, and he belonged to the church of Saint Abba Macarius.  And the angel commanded him to send and bring him to him so that he might help him in admonishing the people and in teaching them; and the angel said also unto him, “He shall be archbishop after thee.”  And straightway Abba Agathon sent and brought the monk, and he delivered to him the work of the churches, and the ordering and teaching and admonishing of the people.  And this Father Agathon died through overwork, and he held his office for fully nineteen years and he died in peace.  Salutation to Abba Agathon.

And on this day also are commemorated Paracu, and the five and forty righteous men of El-Derke, and Aaron the fighter, and Karbu, and ‘Analyu, and Abba Pawli, and Mark, and Gadel.