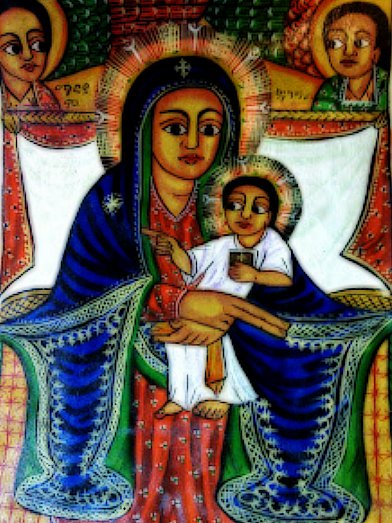 On this day is celebrated a festival of commemoration of our holy Lady the Virgin Mariyam.  Salutation to thee, O Mariyam, on whom the Sun of Righteousness rose.  Salutation unto thee, O garden of stacte and cassia.

And on this day also is commemorated the translation of the body of Saint Lazarus, whom our Lord raised from the dead.  And one of the Christian emperors, having heard the history of the saint whilst he was in the island of Cyprus, translated his body to the city of Constantinople.  When they wanted to translate it [the workmen] found the saint’s body buried under the earth and laid in a stone sarcophagus.  And there was cut upon it in [letters of] gold the following:  “This is the body of Saint Lazarus, the friend of our Lord Jesus Christ, whom He raised from the dead, after [he had lain] in the grave four days.”  When they found the body they rejoiced with great joy, and they carried it to Constantinople, and the priest went out and received it with great honor, and with psalms, and hymns, and prayers, and incense; and they laid it in the sanctuary until they could build a church for it, and translated the body thither.  And they made a great festival in honor thereof on this day.  Salutation to the emperor who translated the body of Lazarus to Antioch (sic) from Cyprus.

And on this day also died the holy father Abba John, Archbishop of the holy city of Jerusalem in the days of the God-loving King David, (A.D. 1411-1413) the grandson of the King Sayf’Ar’Ad.  Now this father was the son of Christian parents, who feared God, and they belonged to the city of Mesr (Cairo); and they reared the holy man [piously] and called him John.  When he grew up they taught him Christian doctrine, and when he was fit to serve in the grade of deacon he was appointed a deacon.  And having performed the duties of a deacon well and carefully, and was fit for the grade of priest, he was appointed priest.  And he devoted himself strenuously to fasting and to prayer, and above all he gave himself to the fear of God and to the love of pilgrims; thereupon he became fit for the grade of apostleship.  By the Will of God he was appointed bishop in the holy city of Jerusalem, and he fought a good fight therein, and he taught the people in humility and in the fear of God.  And they loved him exceedingly because of his holiness, and his goodly figure, and his open countenance which was as that of an angel of God.  After he had been seated on his throne for a few years.  Satan brought a trial upon him and removed him from his people and from his city.  And this was in the days when Abba Mark was archbishop of Alexandria.  And the King of Mesr (Cairo), a Hanafite, forced him to send an embassy to the King of Ethiopia, who was in submission to him, concerning the Muslims who dwelt under his rule.  Now there was in his days a king, whose name was Sayf’Ar’Ad, and he was also named Constantine, and he slew many of the Muslims who rebelled against him, and some of them he drove out of his country and they went to the King of Mesr (Cairo) and took refuge with him.  And they said, “The King of Ethiopia hath made an end of the Muslims; some of them he hath slain, and some of them he hath made Christians.”  When the King of Mesr (Cairo) heard thee words, his zeal for his religion rose up, and he compelled the archbishop to dispatch elders to [Ethiopia], and he told him that he held him as hostage for the obedience of the King of Ethiopia and the safety of the other Muslims who were in his kingdom.  And our father the archbishop and his bishops agreed with the Government of Mesr (Cairo) concerning those who were to be sent to the King of Ethiopia, and they chose those fathers, those shining stars, because of their holiness, and learning, and wisdom, that is to say the honorable father Abba John, and the learned and prudent father Abba Cyril, Bishop of ‘Akhnas, and he forced them to go to the frontier of Ethiopia, and God-loving King Sayf’Ar’Ad, may God rest his soul!  Amen, heard concerning them, and he rejoiced with exceeding great joy; and he sent his soldiers to them with presents and mules to receive them, and when they had come to the king he paid them exceedingly great honor.  And after they had read to him the letter of our father the archbishop, they wished to return to their thrones, and to their peoples, and to their churches, but the lord king prevented them from departing because he loved their holiness, and because he loved their persons, and their priestly service, and their faces which were full of grace, for they were like unto [those of] the angels of God, and they shone like the sun; and the lord king loved them with a great love because of their holiness and their prayers.  After a short time God wished, in His mercy, to remove this father Abba John from the labor of this transitory world, and He brought upon him a slight illness, and he died at a good old age, now his work was well-pleasing unto God, in the eleven hundred and sixth year of the Era of the Righteous Martyrs (A.D. 1390).

And on this day died the great [prophet] Joel.  This righteous man prophesied in the days of ‘Abya (Abijah) the son of Jeroboam, the son of Solomon the king.  He taught the people, and admonished them, and prophesied concerning the dwelling of God of Zion, and concerning His Passion, and concerning the descent of the Holy Spirit, the Paraclete, upon the holy Apostles on the day of the festival of Pentecost.  And he revealed that they would prophesy, their daughters, and their sons, and their old men, and their young men, and the women who dwelt with them.  “And if there be a prophet who prophesies, I will pour out My Spirit upon all men” (Joel ii. 28); and I will not pour except [on] the Apostles.  Now of this passage there are two interpretations; I, Because the holy Apostles were perfect in working righteousness he called them “men,” for he who is not perfect among men in doing the good pleasure of God is not called a “man”; II, From the Apostles the Holy Spirit was poured out upon all the believing saints from the time of their preaching to the day of the Resurrection.  And this prophet prophesied also concerning the going forth of the Law of the Gospel from Zion, when he said, “A stream of water shall flow forth from the house of God, and it shall water the valley of Shittim” (Joel iii.18).  And he made known that after the coming of our Lord Jesus Christ war should break out on the earth, and he spoke also concerning the day of the Resurrection.  And he said, “The sun shall become dark, and the moon shall become like blood, and the light of the stars shall be hidden” (Joel ii. 31).  Now this prophet prophesied more than a thousand years before the coming of our Lord Jesus Christ.  This righteous man belonged to the tribe of Reuben, and he arrived at a good old age, and he pleased God and died in peace, and was buried in the fields.  Salutation to Joel the prophet, the son of Batuel, whose tongue was sharper than a razor.

And on this day our Lady Mariyam wrought a miracle and delivered Matthias from the prison house.