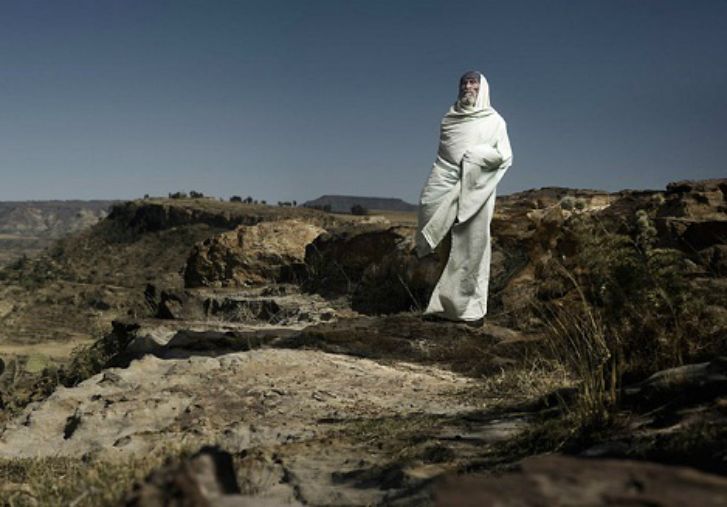 On this day died the holy and blessed father Abba Macarius, Bishop of the city of Kaw.  In this holy man were fulfilled the words of David the prophet, saying, “Blessed is the man who hath not walked in the counsel of the ungodly, who hath not stood in the way of sinners, and who hath not sat in the seat of the scoffers, but whose pleasure is in the Law of God, and in that Law he doth meditate (or speak) day and night” (Psalm I).  This holy man kept the commandment of God, and he traded with [his] talent and gained profit thereby.  How many were the signs and great wonders, which God wrought by the hands of this holy man!  Concerning him it is said that when he was in the city of Kaw, every time he took his seat upon the throne to teach the people he would weep continuously.  And one of his disciples whom he loved exceedingly adjured him, saying, “Why dost thou weep continuously, my father?”  And because of his disciple’s adjuration he answered and said, “I weep when I see the sins of the people and the evil of their works; even as oil is seen upon glass.”  And on another occasion he saw our Lord Christ sitting upon the altar, and the angels bringing unto Him the works of each and every man.  And he heard a voice, which said, “Bishop, why dost thou keep thyself invisible to the people?  Why dost thou not rebuke them and teach them?”  And the bishop said, “My Lord, they will not accept my words.”  And He said unto him, “It is meet for a bishop to admonish the people and to teach them; and if they will not receive his words then their blood be upon their own heads.”  For this reason the holy man was always weeping.  Then [this father] was summoned to go with Saint Abba Dioscorus to the Council, which had been assembled by the Emperor Marcianus.  And when he arrived at the royal palace the guard would not allow him to enter because of his mean attire, and the soldiers told Abba Dioscorus, who said unto them, “Bring him in, for he is a bishop.”  When he had gone in and had heard their words concerning our Lord in their evil faith, how they separated His Godhead and assigned to Him Two Natures, this holy man became wroth with them, and he cursed the Emperor Marcianus in the Council.  And he spoke to the emperor fearlessly, for he had delivered himself over to death for the True Faith; and [the emperor] exiled him and Dioscorus to the island of Gagra.  And from this place Dioscorus sent him with a certain believing man to the city of Alexandria, and he prophesied to him, saying, “Needs must that thou shalt receive the crown of martyrdom.”  When Saint Abba Macarius had arrived in the city of Alexandria, there reached him at this time a letter from the infidel Emperor Marcianus, and with it was a roll containing a copy of the wicked creed, which assigned to Christ Two Natures.  Now Marcianus, the infidel emperor, had commanded his envoy and said unto him, “He who shall first write [his name] on this roll, and doth believe our belief, make him Archbishop of the city of Alexandria.”  And there was in the city of Alexandria a certain man, an infidel, a high priest, whose name was ‘Abrotari, and he took that filthy roll and wished to write [his name] first on it.  And Saint Abba Macarius said unto ‘Abrotari, “Remember the word which Abba Dioscorus spoke unto thee when he went from the city of Alexandria, saying, ‘Thou shalt have dominion over the Church after me’”; and ‘Abrotari remembered that word and did not wish to write [his name] on that filthy roll.  And the envoy of the emperor made known to him that Bishop Abba Macarius did not believe in the faith of the Emperor Marcianus, and that he would not write [his name] on that filthy roll.  When the emperor heard this, he rose up in wrath, and he sent and had Saint Abba Macarius beaten on his members secretly, and straightway Abba Macarius died, and received the crown of martyrdom in the kingdom of heaven.  And believers carried away the saint’s body, and they placed it with the bodies of Saint John the Baptist and Elisa the prophet.  Now Saint Abba Macarius had seen vision wherein these saints, John and Elisa, had said unto him, “Thy body shall be with ours.”  And the body of Saint Abba Macarius was with the bodies of Abba Macarius the Great, and Abba Macarius the Alexandrian in the monastery of Scete.  And this father Macarius went to Christ Whom he loved, and crowned himself with the crown of endurance.  Many salutations to Macarius, who hated false belief.  When the wife of the governor laid her hand on the face of this holy man she was cleansed of her leprosy and made whole.

On this day also are commemorated Paul of the Cell, and Julianus and his companions who became martyrs.