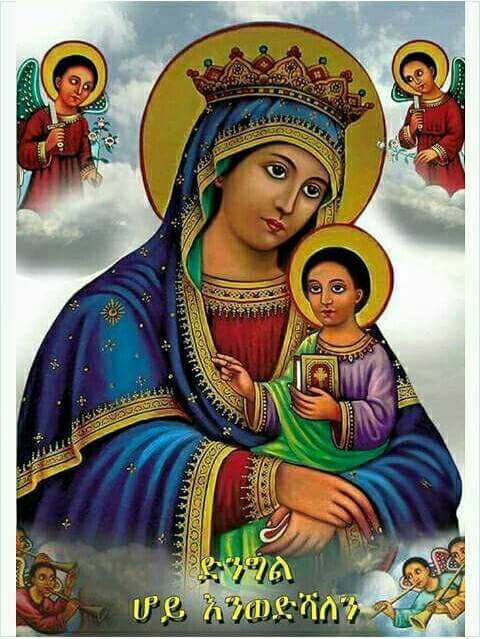 On this day is celebrated the festival of the Birth of our Lord and Redeemer Jesus Christ, by the Lady of us all, the holy two-fold virgin Mary, the God-bearer, for ever and ever, Amen. Salutation to Thy birth O Flower Who blossomed without water.

And on this day also the great Saint Demetrius became a martyr.  This holy man lived in the days of Maximianus the infidel, and he was a native of the city of Thessalonica; he was a Christian, and he learned various kinds of learning, but he held in more esteem than all of them the doctrine of the Church, the Holy Orthodox Faith.  And he taught and preached continually in the Name of our Lord Jesus Christ, and he converted many pagans, and brought them into the Faith of our Lord Jesus Christ.  And certain men made accusations against Saint Demetrius to the infidel emperor, who commanded [his soldiers] to bring him to him.  And there came to the place where the emperor was a man who was strong in his body, and thick in his bones, and who vanquished every man by his strength, and he was a skilled fighting man and no one was able to vanquish him.  And the emperor loved this man exceedingly, and boasted of his superiority over every other man, and said, “I will give much money to the man who shall vanquish him”; but there was no man who was able to do so.  At that moment there rose up from among those who were there a certain man, a Christian, whose name was Bastius, and he came to Saint Demetrius and asked him to pray for him, and to make the sign of the Cross with his hand on his body. And Saint Demetrius prayed over him, and he made upon the body of that man the sign of the Cross, which makes invincible him that believed thereon.  And that man went to the emperor and asked him to let him fight with that fighter of whom the emperor boasted.  And the emperor commanded that Bastius should fight with him, and he thought that the mighty man would vanquish him just as he had vanquished every other man.  When Bastius joined in fight with that mighty man, he vanquished him and threw him on the ground, and the emperor was very sorry for this and was ashamed, and he marveled, and said, “By what means did Bastius vanquish that mighty man?”  And the emperor asked his soldiers concerning this, and they told him that the holy man Demetrius had prayed over him and had made the sign of the Cross upon his body.  When the emperor heard this he was exceedingly wroth with Saint Demetrius, and he commanded his soldiers to beat him until he offered incense to the gods, and worshipped them, and they did as he commanded.  And when Demetrius would not obey his command the emperor commanded the soldiers to thrust at him with spears until he died.  And the soldiers told Demetrius about this command, and they thought that he would deny and abandon the Faith of Christ, and worship idols.  And Saint Demetrius said unto them, “Do whatsoever ye please, for I will neither offer incense to nor worship the filthy gods; I will worship only our Lord [Jesus Christ], the Son of the Living God, Who is God in truth.”  And straightway the soldiers drove spears into him until he died, and he delivered up his pure soul into the hands of Christ.  And when they threw out the body of the saint certain believing Christians took it and laid it in a sarcophagus in their house, and it remained hidden among them until the end of the days of persecution.  And God revealed it to the Christians, who brought out his body, which was with them, and they built a great church for him in the city of Thessalonica, and they laid the body of the saint therein, and to this day it works great signs and miracles.  And each day there distills from it oil and unguent having an exceedingly sweet odor, and when those who are sick anoint themselves therewith in firm faith they become healed, especially on the day of his commemoration.  On that day he distills the unguent in a larger quantity than on any other day, and it drips from the walls of the church and the pillars thereof, and the people collect it and pour it into their scent bottles.  And this sign shall continue, and shall be found to exist until the end of the world; now the priests and the righteous men who have seen this wonderful thing testify concerning [the truth thereof].  Salutation to Demetrius who was stabbed to death with spears.

Salutation to Sakter the martyr, the friend of Mar Demetrius (?), and salutation to his servant who was cut to pieces after him.