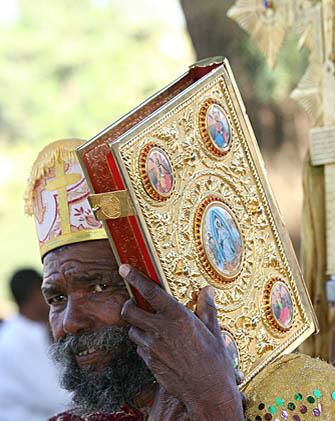 On this day died the holy father, the fighter who prayed always, Abraham the anchorite.  This holy man was a native of the city of Manuf, and his parents feared God, and served Christ, and they were exceedingly rich in the possessions of this world.  When he had grown to man’s estate, this holy man wished to put on the garb of the ascetic life.  And he departed to the city of Akhmim in Upper Egypt, and he came to the saint and great man Abba Pachomius, who arrayed him in the garb of the monk, and he subjected his body to strenuous work and continuous ascetic practices, and he fought incessantly and served God.  And he dwelt with Abba Pachomius in his own company for three and twenty years, and then Saint Abraham asked Abba Pachomius to allow him to dwell by himself in a cell (or cave); and Abba Pachomius having commanded, Abraham departed and went into a cell, and he made with his own hands curved hooks wherewith men caught fish. And our Lord Jesus Christ brought unto him a certain layman who used to take what his hands made and go and buy for him dried beans, which he would carry to him, and what was left of the payment for his handiwork he gave to the poor and needy.  The food of this holy man Abraham each day in the evening was a handful of beans soaked in water with a little salt thrown upon them; and he dwelt in this cell and lived this life or self-abnegation for thirteen years.  And the apparel, which he used to put on, was that in which he went forth from the monastery, and it was worn out in these days, for he had had it a very long time, and he covered his body with rags.  After [each] two or three years he used to go up to the brethren the monks, and partake of the Holy Mysteries and then return to his cell.  At the beginning of his dwelling in the cell the devils used to come to him and terrify him, and make him hear voices, and they made themselves like [beings of] the underworld; and Abraham used to drive them away just as a man drives away dogs.  When his death drew nigh he sent that layman to the monastery of Saint Abba Pachomius, and he summoned Saint Theodore his disciple, and when he came to him [he bowed down] at his feet, and he embraced him and asked him to remember him and to pray over him.  Then Saint Abraham rose up and prayed with Saint Theodore and he lay down with his face to the east, and he delivered up his soul into the hand of God.  And Saint Theodore sent to the monastery, and the monks came and carried his body thereto, and they all prayed over him and were blessed by him, and they laid him with the bodies of the saints.  Salutation to Abraham who dressed in rags and ate beans soaked in water.

And on this day also are commemorated Falibun, and Kayna, and the appearance of the head of John the Baptist, and Martes, and Mars, and Isaac [the king].  Salutation to Isaac the King.

Here ends the blessed month of Tekemt by the good pleasure of God Most High, and by the Will of His Son Jesus Christ, and by the help of our holy Lady, the two-fold Virgin, Mary, the God-bearer.  May the blessing of her prayers and the gift of her help, and the mercy of her beloved Son be with our King John, and with the Queen Sabla Wangel, and with his scribe Walda Haymanot, and may God have mercy upon us in the kingdom of the heavens, with all the martyrs, forever and ever!  Amen and Amen.