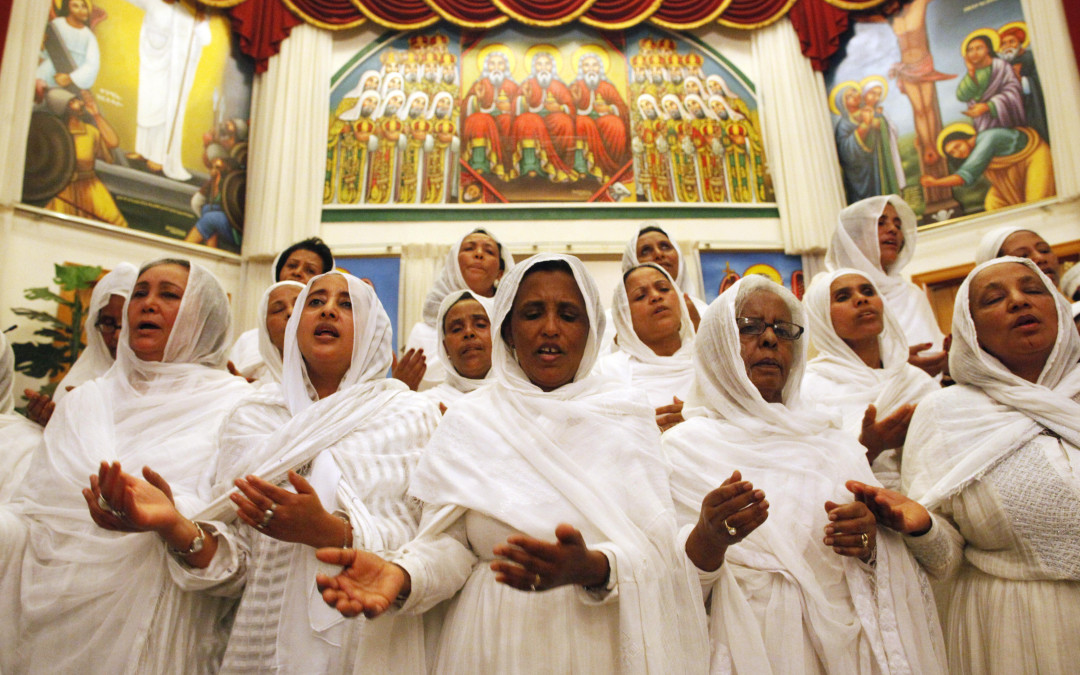 On this day were slain the innocent, the holy and righteous children and martyrs, [who were in number] eighteen thousand. [In the Bodleian MS. 144,000.] When Herod, the wicked, had waited for the diviners to return to him, and they did not do so, he became exceedingly angry, and he sent his soldiers and they killed the children in Bethlehem, and in Judea, and in all the region round about, whose days were two years and less, according to the time when he enquired of the diviners. The Holy Gospel saith that when the diviners departed the angel of God appeared unto Joseph in a dream, saying, “Rise up, take the Child and His mother and depart to the land of Egypt, and remain there until I tell thee to return, for behold, Herod is seeking for the Child to kill Him.” And Joseph rose up and took the Child and His mother by night, and departed to the land of Egypt, in order that might be fulfilled the words of the prophet, saying, “Out of Egypt have I called My Son” (Matthew ii, 13; Hosea xi, I). And Herod, the accursed, was wroth, and he wished in his mind to kill the children, thinking that our Lord Christ might be one of them, and that he would kill Him. And our Lord Christ, Who performed every human act, the committal of sin alone excepted, fled from the face of Herod, in the operation of His wisdom, and if Herod had found Him and killed Him, according to what was meet for the might of His Godhead He could not have died, or men might have thought that His Incarnation was an inferior thing. Therefore our Lord fled to the land of Egypt so that prophecy might be fulfilled, and that He might teach us also to flee from evil, and might destroy the idols of the country of Egypt. And how was Herod able to kill these very many children? He invented pretexts, and he sent messengers into all the cities, saying, “An Imperial Edict hath reached me from Caesar, who hath commanded to be counted all the little children whose days are two years and less, so that he may give unto them money and apparel and they may belong to his army.” And because of this many children were gathered together with their mothers, and Herod sent out ten hundred soldiers to them and they murdered them on the hills in one day. And then was fulfilled the prophecy of the prophet who saith, “A voice is heard in Rama, weeping and lamentation. Rachael weepeth for her children, and refuseth to be comforted, because her children are wanting” (Jeremiah xxxi, 15; Matthew ii, 18). Now Bethlehem is named after Rachael. And Saint John the evangelist, ‘Abukalamsis, saith that he saw the souls of these holy children, and that they cried out, saying, “How long shall we remain unavenged for the violence done unto us? And Saint John saith, “I saw a vision, and behold there was given unto each one of them white apparel, and one said unto them, ‘Rest now until your brethren the martyrs who are in the world shall finish their martyrdom.’” And he saith also, “The praise wherewith the Four Beasts and the priests of heaven praise [God] none knoweth except these eighteen thousand little children who have not defiled their bodies with lust; and they shall dwell with God always. Blessed are they and blessed are the wombs that bare them.” Salutation to the children whom Herod killed, thinking that he would kill Christ among them. Salutation to Isaiah who foretold clearly the birth of Christ.

And on this day also died Saint Libanos, who is [called] “Mata’a.” The name of the father of this holy man was Abraham, and the name of his mother was Negest, and they were rich in gold and silver. And on the day when they brought a wife to this saint, the angel of God, Gabriel, called him in the night, and brought him out from the house of his father, and took him to the monastery of Abba Pachomius, where he became a monk. And then he departed to the country of Ethiopia, and he dwelt there and fought the spiritual fight for many days. And he brought water out of a rock, and performed many miracles; and he died in peace. Salutation to Libanos.

And on this day also is commemorated Abba Ammon, who was always cursing the hair of women, and who could never abase the instrument of sin. Salutation to Ammon. [Omitted in the Bodleian MS.]
Glory be to God Who is glorified in His Saints. Amen.