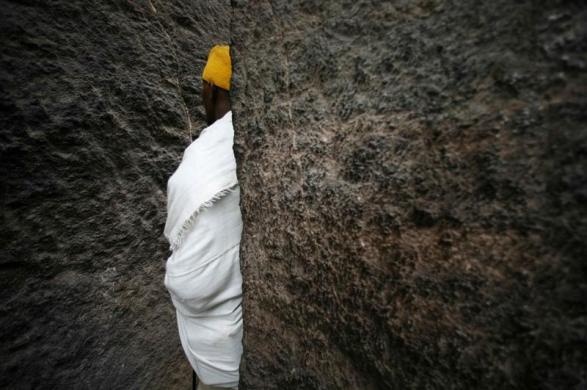 On this day died Saint Abba Sol-Petros (Silvester), Archbishop of the city of Rome. Because of the strenuousness of his spiritual fight, and his virtues, and his devotion to the ascetic life, and his knowledge, and his righteousness, they appointed him Archbishop of the city of Rome, after the death of Meletianus, Archbishop of Rome, his predecessor. He was appointed in the eleventh year of the reign of the Emperor Constantine the Great. And being seated on the throne of Peter, the chief of the Apostles, he baptized Constantine with Christian baptism. Now Constantine did not repent, and was not baptized until the eleventh year of his reign, because up till that time he was occupied in working and fighting against unbelievers, and in killing them. And he pulled down the houses of idols, and built churches to the honor of God. And the striving of this father Sol-Petros (Silvester) shone exceeding brightly, and he taught the people frequently, and he removed the doubt and the evil thought of the Satans from their hearts, and he explained things which were obscure to them, and made them to understand them; and he disputed frequently with the Jews and the Greeks. And he converted many of them and brought them into the Faith of our Lord Jesus Christ, and he baptized them with Christian baptism, and his name was respected and feared by believers. And he composed many discourses and vanquished [his opponents], and he wrote books on the knowledge of God and on the Incarnation of the Son, and through them he gave drink to the soul of the man who was thirsting for the knowledge of God. In the seventh year of his archiepiscopate the assembling of the General Council of the Three Hundred and Eighteen Holy Fathers in the city of Nicea took place. This holy father Sol-Petros (Silvester) anathematized Arius, and he excommunicated him and all those who believed his words. He sat for eleven years, and finished his strife nobly, and he pleased God and died in peace. Salutation to Sol-Petros (Silvester), who baptized Constantine, the Inventor of the Cross.

And on this day also is commemorated Saint Abba Ephraim. Salutation to Ephraim, the father was filled with wisdom.

And on this day also are commemorated Mosolon (Salomon), and Gregory, and Mark, and Antianus, and Luya, and Maylen, and Sosyas, and Marteya
Glory be to God Who is glorified in His Saints. Amen.