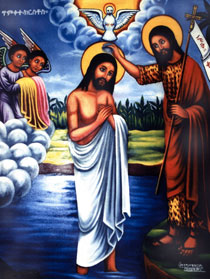 On this day our Lord Jesus Christ was baptized in the River Jordan by John the Baptist. And the festival which is kept on this day is called in the tongue of the Greeks “Ipiphany,” which is, being interpreted, “the appearance of the Godhead,” because on this day appeared the mystery of the Holy Trinity–the Father, saying from heaven, “This is my Son Whom I love, in Whom I am well pleased. Hear Him.” And the Son was standing in the Jordan, and the Holy Spirit, in the form of a dove, was standing on Him, even as John the Baptist was a witness of this, saying, “Our Lord Christ, having been baptized, went up out of the water; and straightway the heavens were rent, and the Holy Spirit came down upon Him like a dove. And a voice came from heaven, saying, This is My Son Whom I love, with Whom I am well pleased. Hear Him.” And on this day our Lord revealed Himself, (now, for a period of thirty years He had not revealed Himself to anyone), and on this day He revealed Himself to the children of Israel. And John the Evangelist was a witness, and John the Baptist was a witness to Him before the people, and he openly said unto them, “This is the Lamb of God Who taketh away the sin of the world.” And His pronouncement I do not understand, and only that He appeared unto Israel, and because of this I came out to baptize Him with water. And at this festival the glory of Christ appeared, as that of the Son of God, and His own glory as the Lamb of God, Who taketh away the sins of the world. Because of this the festival this day is a great festival among all Christian peoples, and they cleanse themselves with holy water in imitation of the Baptism of our Lord Christ; and they received during this festival remission of their sins, provided that they continue in the purity which they have received. Therefore it is meet for us to keep, and serve, and glorify the abundant grace of our God and Redeemer Jesus Christ, Who became man for our sakes, and delivered us from our sins.

And on this day also Saint Anatolius became a martyr. This saint was one of the men of Persia, and he was made a general of the army of Rome, and he continued in his office for fifteen years. When the Emperor Diocletian denied Christ, this saint chose the kingdom of heaven, and rejected the honor of this fleeting world. And he came and stood up before the Emperor Diocletian, and he unfastened his belt [and cast it away from him], and he cursed the emperor and his idols; and the emperor was amazed at his daring. And when the emperor learned that he was a Persian nobleman, he spoke to him fair and persuaded him [to reject Christ], and he then handed him over to Khermanos, the general, that peradventure he might be able to convert him from the Faith of Christ. And when Khermanos was unable to change his thoughts from the Godhead of Christ, he brought him back to the emperor who condemned him to be tortured with every kind of torture. And our Lord Christ sent His angel to him, and he comforted him in every tribulation. And the emperor tortured him for many days, and doubled his tortures, and he hung him up on the wheel, and beat him several times; and the soldiers flayed him, and cut out his tongue, and they threw him to the ravening beasts, and then they cast him into a dark place. And he delivered up his soul thrice, but God raised him up. And when Diocletian the infidel was wearied with torturing him, he commanded them to cut off his head with the sword, [and they did so], and he received the crown of martyrdom in the kingdom of the heavens.

And on this day also died Saint Abba John, the seventy-fourth Archbishop of the city of Alexandria. This father was a merchant before he was made Archbishop of Alexandria, and he traded with the country of India, and he was always traveling on the sea. First of all he became a deacon in the church of Saint Mercurius, the martyr, in Mesr (Cairo). And he became a scribe, but he abandoned the scribe’s profession and became a merchant. And [the bishops] elected him archbishop, and they enthroned him on Sunday, the fourth day of the month of Yakatit (Feb.-March) in the nine hundred and fifth year of the martyrs (A.D. 1189); and he protected his flock well. And he had very much money before he was made archbishop, that is to say, a sum of twenty thousand dinars in gold. And he gave all his money in his lifetime to the poor Christians, and to the churches and monasteries, and all his money came to an end before his death, and he died in debt to his brother’s son. During the days of his archiepiscopate he never ate bread at the expense of any Christian person, or at the expense of any nobleman, or any poor man; and he never accepted a present (or fee) from any of them. He held his office for eight and twenty years, and he died on the day of the festival of the Baptism (i.e. Epiphany), on the eleventh day of the month of Ter in the nine hundred and thirty-second year of the martyrs (A.D. 1216).

And on this day also died Saint Justus, and Saint Fayos.

And on this day also died the holy father and fighter Abba Wakris. This saint was brought up with Basil the Great, and he made him a priest; and he was of goodly appearance, and his face was very pleasing. As a young man his first act was to desire the governor’s wife, for he loved her dearly, and she loved him, and they made a plan together to go to another place where they could fulfill their desires. And whilst they were taking pains to arrange this matter Wakris saw himself in a dream bound in fetters, and standing up before the governor’s tribune, and there were many bound in fetters with him, and each one of them was being questioned concerning his sins. And he said in his heart, “What is the meaning of my being fettered? Can it possibly be because of this woman, with whom I wish to defraud her husband, who will lay information against me and have me brought to this serious state?” And whilst he was feeling disturbed over this matter there came unto him a man in the form of an old friend, and he said unto him, “What is the meaning of this thy being fettered?” And Wakris wished to hide himself, and was ashamed of his sin. And when his friend pressed him, he said unto him, “O my friend, thus and thus have I done. It seemeth to me that so and so hath laid an information against me, because of his wife, and because of this I am afraid and am troubled.” And the angel who had come unto him in the form of his friend, said unto him, “O my beloved, swear unto me by the Gospel that thou wilt not do this thing, and [then] thou shalt not go back to it a second time; I will be surety for thee.” And Wakris swore to him by the Gospel. And when he woke up from his sleep he knew that the vision which he had seen was true, and he therefore left his city and departed to Alexandria, where he found a certain God-fearing woman, whose name was Helani; and when they were holding converse together he told her everything which was in his heart. And she said unto him, “Abandon thy splendid apparel, and dress thyself in a humble garb, and make thyself a close follower of God.” And from there he went into the desert, and he dwelt there and lived upon the herbs thereof until his belly became dried up, like a stone, and exhaustion seized him, and at length our Lord came and healed him. And the devils used to tempt him and afflict him severely, but he fought strenuously with fasting and with prayer. And in the winter time he used to stand naked under the falling rain, and in the summer he was afflicted by the burning heat of the sun, and by the cold at night, and at length the gift of the Holy Spirit was given unto him. And the angels used to come unto him and feed him with the bread of heaven, and give him to drink out of the heavenly cup, and he was worthy of divine vision so that he might know hidden things. And he composed three homilies, one on those who dwell in the desert, and one on the company of the brethren, and one on the priesthood. One day there came unto him a certain dweller in the desert whose name was Bula, and they embraced each other, and Bula said unto him, “O my brother Wakris, do not live alone. Make a few of the brethren to come and live with thee, to comfort thee, and thou shalt be delivered from the war of Satan”; and he did so. And one day there came to him three Satans who had taken the forms of the heretics of Arius, and Nestorius, and Mani, and he disputed with them about their faiths, and he vanquished them by the words of the Holy Scriptures, and by the doctrine of the Orthodox Fathers; and he worked many miracles, and his miracles were innumerable. One day having arrived at the church he wished to go in, but found it closed, and the brethren searched for the keys and could not find them; and having made the sign of the Cross over the gates they opened to him by his will. And this Wakris is he of whom it is said, that when the brethren said unto him, “Thy father is dead,” he replied to them, “Ye lie; my father is a heavenly being and cannot die.” And behold his history is written in the narrative of his strife, and in the Book of the Histories of the Holy Fathers. And having grown very old and grey, he departed to God Whom he loved.

Salutation to Thy Baptism by which every man is cleansed of his sins.

Salutation to Thy Baptism which took place at the end of thirty winters.

Salutation to Justus, and to Guedet. Salutation to John, who gave twenty thousand dinars in silver and gold to the poor and needy.