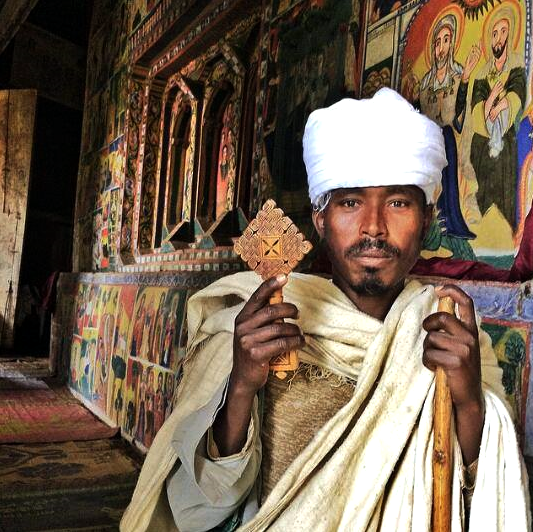 On this day the most excellent Mehrael, the virgin, became a martyr.  She was a native of Tomawiha, and she had God-fearing and Christian parents; her father was a priest and his name was John, and [the name of] her mother was Hilaria.  They had no children, and because of this were very sad, and they prayed to God, and after they had waited some days, Hilaria was rewarded with a beautiful daughter, whom she named “Mehrael.”  And when the maiden was twelve years old she began to work many signs and wonders, by the grace of the Holy Spirit, which dwelt upon her.  And then when the wicked Diocletian was reigning she went out one day to the river bank, and she found a ship and she embarked in it, and she departed with those who were going to martyrdom.  When she arrived at the city of ‘Ensna (Esnah), they set her before the governor, whose name was Philipianus.  And when he saw her, he had pity on her for her tender body, and he wanted to set her free; but as soon as she knew that he was going to release her, she cursed him with great boldness, and reviled his unclean gods.  Therefore was the governor wroth, and he commanded her to be tortured severely.  When he could not persuade her to abandon the True Faith, he commanded the hunters to collect all kinds of serpents, and scorpions, and vipers, and reptiles which sting, and to throw them into a corn sack and to put the saint into the sack with them; and the soldiers did so.  Thereupon the angel of God appeared, and gave her a promise; and after this she delivered up her soul, and finished her martyrdom, and received her heavenly crown.  Then they took her out of the corn sack and buried her in that place.  When her father and mother heard of it, they set out with very many natives of their city, and when they arrived at the place where her body was, they took it up, and made it ready for burial with great honor, and they built over her a shrine, inside the house, in a secret place, and many miracles were made manifest there.

And on this day also four and forty soldiers of the company of Saint Cyriacus [and Julitta] became martyrs.  [The Bodleian MS. has five thousand four hundred and thirty-four.]

And on this day also died the holy father and spiritual fighter Archilides.  This holy man was one of the patricians of Rome; the name of his father was John, and that of his mother Sandalika.  And they both were righteous before God, and they walked in the commandments of God without blemish.  And when the days of Saint Archilides were twelve years, his father died, and his mother wanted to marry him to a wife, but he did not wish this.  And his mother advised him to go to the emperor, so that he might receive the office which his father had held, and she sent two of his servants with him, and also many gifts to give to the emperor.  And when they were on the sea a mighty storm of wind broke on them, and the waves rose high, and the ship was broken in pieces, but Saint Archilides hung on to one of the planks of the ship and it carried him to dry land.  And when he was going up from the sea he found the dead body of a man which had been cast into the sea, and he sat down and wept over it and remembered the transience of the world.  And he rebuked his soul, and said unto it, “What have you and I to do with the goods of this fleeting world?  After I am dead I shall return to dust.”  And straightway he rose up and prayed, and entreated the Lord Christ that he might go in the right way, and then he walked on and arrived at a monastery of the country of Syria, which was built in the name of Saint Romanus.  And he gave to the abbot the two hundred dinars in gold which he had left, and he begged him to array him in the garb of the monastic life; now the Holy Spirit had told the abbot about Archilides before his arrival, and when he came he rejoiced in him with a great joy.  And he gathered together all the holy brethren and monks in the church, and the abbot prayed over Saint Archilides, and he arrayed him in the garb of the monk, and the brethren rejoiced in him with a great joy, because, manifestly, the grace of God was upon him.  And Saint Archilides, having become a monk, devoted himself to the narrow way, and he fought a great fight.  And he always fasted seven days at a time, and he prayed day and night, and God gave him the gift of healing the sick; and the people brought unto him all those that were sick, [and he prayed] over them and healed them.  And he made a covenant with our Lord Christ that he would never look upon the face of a woman.  And being without information concerning him for a period of twelve years, and not knowing what had become of him, his mother sorrowed for him, and thought that he was dead; and she mourned for him greatly.  And she built a fine house for receiving strangers, and she added to it a house wherein the pilgrims, and the poor, and the needy, might lodge; and she herself lived in an upper room of the house for strangers (i.e. her guest house).  And one day she heard certain travelers talking among themselves about the fame of Saint Archilides, and his holiness, and his spiritual fight, and the grace of God which was upon him, and they also described his miracles and the beauty of his appearance.  And when she heard them talking, her heart burned like fire, and she knew that they were talking about her son, and they told her all about him, and she knew that her beloved son was alive.  And she rose up straightway and traveled until she came to the monastery of Saint Romanus, and she sent a message to her son Archilides and said, “Behold, I have arrived, and I wish to see thy face; I am thy mother.”  And he sent a message unto her, saying, “I have made a covenant with my Lord Jesus Christ that I will never look upon the face of a woman again, and I cannot break the covenant which I have made with my Lord Jesus Christ.”  Then she sent a second message unto him wherein she begged and entreated him that she might see his face, and she said unto him, “If thou dost not show me thy face I will go into the desert, and the wild beasts shall devour me.”  And when Saint Archilides knew that she would not leave him, and he, on his part, was unable to break his covenant with God, straightway he prayed to God and asked Him to receive his soul.  And he said unto the gatekeeper, “Go to my mother, and let her come in to me”;  now God had accepted his prayer and heard his petition, and had taken his holy soul.  And when his mother came in she found that he had delivered up his soul, and she cried out with a loud voice and wept; then she asked God to take her soul, and He heard her petition also and took her soul.  And when the monks wanted to make them ready for burial they tried to separate the body of Saint Archilides from the body of his mother, but a voice came from the body of Saint Archilides, saying, “Bury my body with the body of my mother in one grave; I did not give her heart’s desire; let her see me.”  When they heard this voice they marveled exceedingly and glorified God, and they buried the two of them in one grave.  And God made manifest from his body a great power for the healing of all sick folk.

And on this day also Saint ‘Emrais became a martyr.  This blessed maiden had honorable parents who held firmly the Faith of Christ, and she was brought up in the fear of God.  And one day when she was going down to the river to draw water, she saw the bishops, priests, and deacons who were bound in fetters for Christ’s sake.  And she asked the scribe to write her name down with theirs, and they brought her to Quilquilianus the wicked governor, and he persuaded her with many words to worship idols.  And when she refused to do so he commanded the soldiers to cut off her head, [and they did so,] and she finished her martyrdom with all those who were her companions.

And on this day also died Maximus, the brother of Saint Damatheus.  And behold we have written the account of his strife with that of his brother in the section for the seventeenth day of the month of Ter.

Salutation to the blessed Mehrael who finished her martyrdom in a corn sack; and salutation to her brother.

Salutation to Archilides who was buried with his mother.

Salutation to ‘Emrais, who left her water-jar, and joined the company of fettered men who were to become martyrs.

Salutation to Maximus who fought the spiritual fight from his youth up.

Salutation to ‘Abdeyu, the follower of Elijah.

Salutation to the four thousand and thirty and four soldiers who asked that they might be beheaded outside the city.