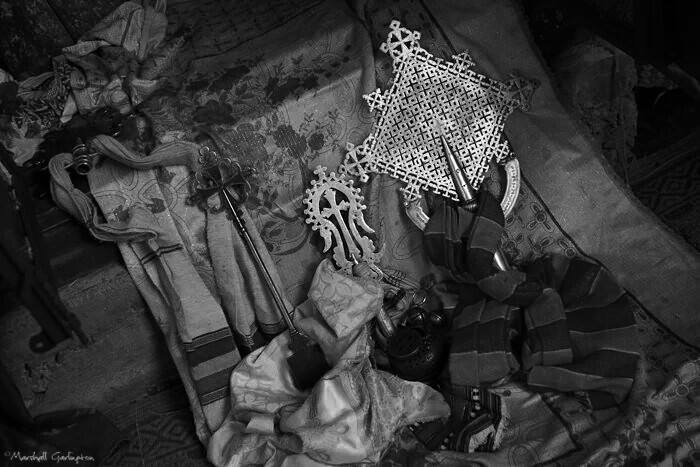 On this day were found the bodies of the saints Abba Behura and Abba Basora, his brother, and ‘Enira their mother. These saints and fighters were man of the city of Sobes, ad they became martyrs in the days when idols were worshipped, and their bodies were laid in the church of the city of Sobes. In the nine hundred and thirty-seventh year of the pure martyrs (A.D. 1221), in that year [I say], Frankish soldiers attacked the country of Egypt, and they captured the city of Damietta, and ruled there. And they also captured many of the large cities, which were round about Damietta. And King Komel (Kamil), that is to say, the King of Egypt, gathered together very many soldiers from all the land of Egypt, and he went forth to fight against the Frankish soldiers, and as they marched they destroyed many churches. Among such churches was a church of the city of Sobes, wherein were the bodies of the holy martyrs. And one of his soldiers took the coffer wherein where the bodies of the saints, and he opened it thinking that he should find therein money of this world wherewith to enjoy himself. And he found precious pearl-stones of great price, that is to say, the bones of the holy martyrs, but he did not know their value, and he scattered them by the walls of the church, and carried away the coffer, which had contained their bodies and sold it. And God, the Most High, Who is patient and most merciful, forbore with that man until he came to the Frankish army. And the Franks and Egyptians fought and that man was killed at the very beginning of the fight, according to the testimony of his companions who were looking at him when he was killed, and who on their return to their country proclaimed the glory of God, and declared and spoke to every man, saying, “This man was the first to be killed. A sword pierced his neck and cut off his head, and destroyed its sides and he died an evil death.” Now when that man cast away the bones of the saints there was a certain believing woman, the wife of a priest, who stood watching him, and straightway she gathered them up and rolled them in her head-cloth with joy. And because of her fear of the Muslims, she went into the church, and laid them down in a corner of the church, tied up in her head-cloth, and she covered them over with tiles; and they remained covered over with the tiles in the corner of the church for a period of twenty years, and the woman forgot their history. And God having willed to reveal them for the benefit of the Christian people, two men mentioned them before the woman, and the woman remembered them, and straightway she told the priests and the believing folk about the place where the bones were. And the priests went into the church, and they took the bodies (sic) of the holy martyrs, and bore them with great honor, and they made a beautiful coffer for them, and laid them in it; and they made a great festival, with prayers and psalms, and hymns, as it might be at this day, and they laid them in the church. And Abba Gabriel, Bishop of this city, commanded the people to make a festival for them, and to hold this day in honor, and to write their names down in each Egyptian city for the festival; and they did as the bishop commanded. And many signs and miracles appeared through these bones, among them being the following: There was a certain woman who had a blind daughter, and she had lost all hope of her daughter ever being able to see; and the blessed woman prayed to the bones of the saints, and straightway her daughter rejoiced, and she was able to see with her eyes as well as formerly. And she glorified our Lord Jesus Christ Who honored the martyrs with so great honor. Salutation to the woman who found the bodies (sic) of the martyrs.

Salutation to the consecration of your church, [O Abba Behura and Abba Basora].
Glory be to God Who is glorified in His Saints. Amen.