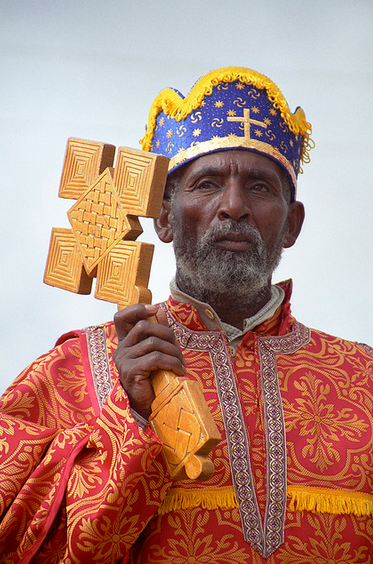 On this day died Maria, and sainted woman and spiritual fighter.  The parents of this saint were Christians of the city of Alexandria, and though certain noblemen of the city of Alexandria desired her, she did not wish [to give herself].  When her father and mother died, all the possessions, which her father had left her, she gave to the poor and needy, with the exception of a very little money.  And she entered one of the houses for women, which were outside the city of Alexandria, and she assumed the holy garb of the nun, and she fought a great fight.  For twelve years she fought against sleep, and at length having killed [the desire for] it she never slept during the day; and during the whole of that period of twelve years she fasted continually until the evening, according to the Rule of that nunnery.  Then she asked the abbess to allow her to shut herself in a cell to try whether she could endure it or not.  And the abbess said unto her, “Shut thyself up in thy cell.”  And she went into the cell and shut her door, and she dug a little hole in it through which she could take in her food, and also receive the Holy Mysteries, and she dwelt in the lower part of the cell for two and twenty years.  And during all those days she stood up and prayed continually, and ceaselessly from morning till night.  During the night she slept a little, and the rest of the night, until dawn, she passed in prayer. She fasted two days at a time, and ate bread soaked in water.  During the days of the Great Fast she never are bread at all–until the forty holy days of our Lord were ended–but she fasted three days [at a time] and then ate beans soaked in water.  When the festival of the Holy Baptism [of our Lord] arrived on the eleventh day of the month of Ter she would ask them to bring her some of the holy water.  When they brought it to her she washed her hands and her face therein, and [then] received the Holy Mysteries, and drank that holy water.  And she fell sick, and laid herself down on her bed until the twenty-first day of Ter, when she received the Holy Mysteries for the second time that day.  And she called the abbess and besought her, with many entreaties, to put her feet near her, and when the abbess did so, she embraced them and laid her face upon them and said, “I bow to thy feet which have brought thee to our Lord Christ.”  Then she called all the virgins, and asked them to come and visit her after three days; but when the three days had passed, and it was the twenty-fourth day of Ter, they visited her and found that she was dead.  And they lifted her up and took her to the church, and they prayed over her, and they made her ready for burial and laid her with the bodies of the [other] holy virgins.  Salutation to Maria.

And on this day also is commemorated Abba Absadi, of whom it is said that he had in him the virtues of purity, and that because of this God protected him, and caused the memorial of him to live in all the world.