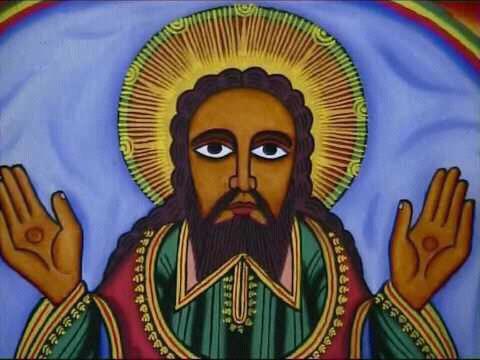 On this day nine and forty holy fathers, the elders of the desert, became martyrs, and they sent to the emperor and his sons the reasons for their martyrdom which took place in the days of the Emperor Theodosius, the son of the Emperor Arcadius, the Just.  Now Theodosius had no son, and he sent unto the holy elders of the desert of Scete, asking them to beseech God to give him a son.  And among them was a certain elder, who was very great, and his name was Bisudura, and he wrote to the emperor and said unto him, “God doth not wish a son to be begotten by thee, so that he may not associate with the doubters in an unclean Faith.”  And it came to pass that when the king had read the letter of the saints he thanked God, and held his peace.  And certain wicked men advised him to marry a second wife so that by her he might beget a son to inherit his kingdom after him.  And the emperor answered and said unto them, “I will do nothing whatsoever except by the command of the holy elders of the desert of Scete in the country of Egypt.”  Now their fame had reached all the ends of the world.  And the emperor sent a second messenger to enquire of the saints concerning this matter.  And that messenger had a son who asked his father to take him with him, and he took the boy with him, so that he might be blessed by the holy elders.  And when the messenger and his son came to the elders, and they read the emperor’s letter, they took the messenger of the emperor, (now Abba Bisudura was dead,) and brought him to the body of Abba Bisudura, and they said unto the body, “O our father, behold a letter from the emperor hath arrived and we know not how to answer it.”  And straightway Abba Bisudura, the elder, rose up, and said, “Did I not say unto thee, Tell the emperor that God will not give him a son, so that he may not defile himself by associating with those who doubt.  And if he marrieth ten more wives God will not give him a son?”  And having said these words the blessed Bisudura turned and lay down.  And the holy elders wrote a message to the emperor according to what Saint Bisudura had said, and they gave the paper to the emperor’s messenger.  And when the messenger had gone forth to depart, the pagan barbarians arrived.  And a certain great elder, whose name was John, stood up and said unto the brethren, “Behold the barbarians have come and they wish to kill us.  He who wisheth to become a martyr let him stand up with me, and he who is afraid, let him go up to the fortress.”  And some of the monks fled, and those who were left with Abba John were nine and forty elder monks; and the barbarians came and slaughtered all the nine and forth elder monks.  And the son of the messenger of the emperor turned back from the road, and he saw the angels laying crowns upon the heads of the elder martyrs; now the name of that young man was Deyas.  And he said unto his father, “Behold, I see the angels of the spiritual beings laying crowns on the heads of the elders.  And now, I myself will go and receive a crown like them.”  And his father answered and said unto him, “I will go with thee, O my son,” and they went back and revealed themselves to the pagan barbarians, who slew them, and they received crowns of martyrdom.  After the barbarians had departed the monks came down from the fortress, and they collected the bodies of the saints, and they made them ready for burial and laid them in a cave.  And they prayed before them each night, and sang psalms and hymns, and were blessed by them.  And certain men came and stole the body of Saint Abba John, and took it to the city of Bitanun; and the saints waited a few days, and then took him and brought him into his place, and the others [they took] to the Fayyum.  And they stole the body of the young man, [the son of the emperor’s messenger,] and when they brought it to the Fayyum, the angel of God snatched it up, and brought it back to the body of his father.  Many times did the monks try [by night] to separate the body of the young man from that of his father, but in the morning they found the two bodies together again.  At length one of the elders saw the messenger in a vision, who said unto him, “Glory be to God!  When we were in the flesh we were never separated, and why should we be separated when we are with our Lord Christ?”  From that day none separated them.  When the barbarians pillaged the desert of Scete the monks were afraid for the bodies of the holy elders, and they removed them from their places to the pit of the church of Saint Macarius.  And they made for them a large shrine there [in the form of] a cave, and they built over it a church in their names in the days of Theodosius the archbishop.  And when Abba Benjamin came to the desert of Scete he established for them a festival on the fifth day of the month of Yakatit, the day when his body and theirs appeared.  And the church, which existeth to this day, is well known, and its name in Coptic is “Behama Bakasit,” that is to say, “nine and forty martyrs.”  Salutation to the nine and forty martyrs.

And on this day also died Saint Anastasia.  This holy woman was a daughter of the palace of the city of Constantinople, and she was exceedingly beautiful.  The Emperor Bastianus wished to marry her, but she did not wish this, and she never imagined it in her heart, for the emperor already had a wife living; on the contrary she made known to the wife of the emperor that the emperor wanted to marry her.  And the wife of the emperor sent this holy woman out of the palace secretly, and she caused her to be taken by ship to the country of Egypt, and she built her a religious house outside the city of Alexandria, and that house was called by her name.  And when the emperor knew that Saint Anastasia had departed to the land of Egypt, he sent after her and searched for her.  And when Anastasia knew this, she put on a man’s dress, and disguised herself as a judge (or officer), and fled to the desert of Scete, and took refuge with Abba Daniel, the abbot, to whom she revealed her secret.  And he took her and placed her in a cell by herself and no one knew that she was a woman, but Saint Daniel commanded a righteous elder to draw a vessel of water for her once a week, and to set it down by the door of that cell.  And she lived there for eight and twenty years, fighting the fight, and leading the ascetic life with fasting, and prayer, and prostrations, and vigil.  And when the elder died who used to draw water for her, Abba Daniel commanded his disciple to do as the elder used to do.  And the holy woman used to write her will on a tile and set it down by the door of her cell, and the disciple of Abba Daniel would take the tile to his teacher knowing nothing whatsoever about what was written upon it.  One day he brought the tile to his teacher, and when Abba Daniel had read it, he wept, and said unto his disciple, “Rise up, O my son, let us go and bury the body of this saint, for he wished to be free from his body.”  And they went and came to the cell, and they received a blessing from Anastasia, and she said unto Abba Daniel, “For God’s sake do not wrap me up for burial in anything except this garment which is on me”; then she prayed and said, “I commit myself to the keeping of God,” and she lay down on the ground and died.  And they wept over her, and took thought for burying her.  When the disciple of Abba Daniel drew near to her to swathe her, he saw that her breasts were like unto dried fig leaves; (now they became like this through excessive ascetic practices,) and Abba Daniel marveled, and was silent.  When they had buried her they returned to their cell, and his disciple fell down at the feet of Abba Daniel, and he entreated him, saying, “For God’s sake, tell me the story of this saint, for I saw that she was a woman.”  And Abba Daniel began to tell him how she belonged to a noble and royal family of the city of Constantinople.  And how she gave herself to Christ, and how she abandoned the glory of this fleeting world, and how this woman fought the great fight which she fought against Satan, and how she cast aside a woman’s weakness, and overcame the might of strong men, and pleased God, should serve as admonitions to us who are men.

Salutation to the nine and forty monks who became martyrs, and the emperor’s messenger and his son, and to Anastasia.

And on this day also are commemorated Mesratius (Masterius), and Sernius (Sorenus), the martyrs, and Joseph, who loved the poor.  Salutation to Joseph, who was like unto Tabitha, and gave away all his possessions.