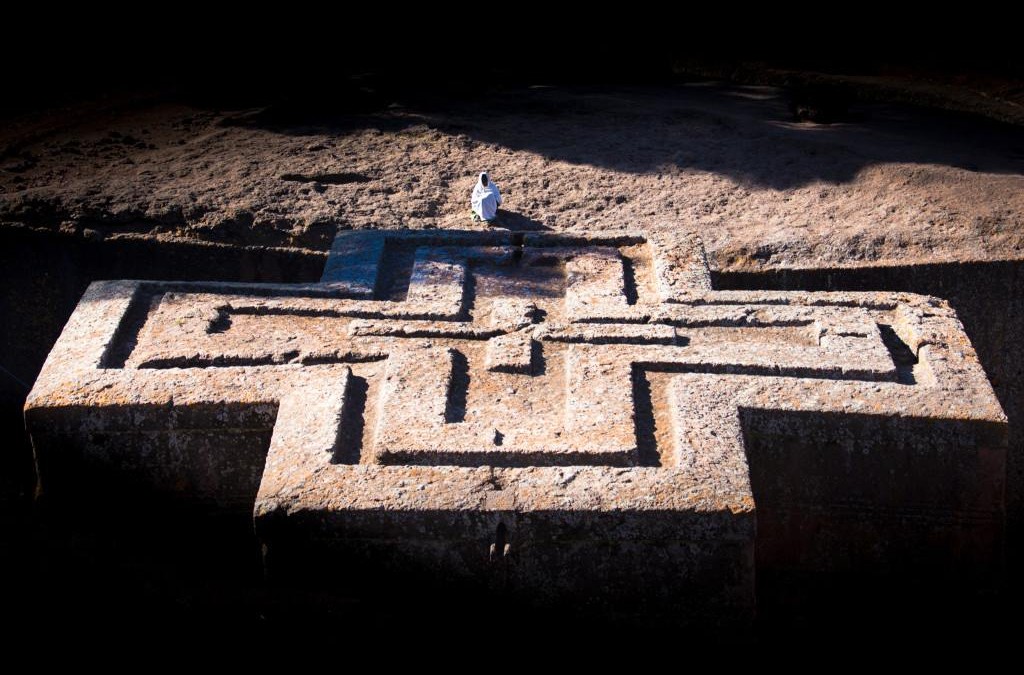 On this day Saint Clement became a martyr. This saint was the son of a widow who was a believer whose name was Akrosia, and who lived in the city of Kiras, in the days of Aranius and Lucius, Kings of the Galatians. And the boy grew up, and his mother taught him all the law and doctrine of the Church. When his days were twelve years, he fought a great fight with fasting, and many prayers, and he devoted himself to the ascetic life. He ate nothing which had been cooked by fire, and he never ate meat, but he lived on the produce of the earth, like the Three Children. When he was appointed deacon he increased in knowledge and wisdom, and the grace of God was upon him. When the report of him reached Diocletian he had him brought to him, and he persuaded him earnestly, and promised him to make him his son, if he would obey his commandment and sacrifice to his idols. When he would not hearken to his commands, he tortured him with every kind of torture, but God gave him strength under the torture, and He raised him up unharmed, and He put the wicked ones to shame. Thus was reckoned to him the first of the seven martyrdoms which he suffered at the hands of the tribunes, namely that suffered at the hands of Diocletian, who tortured him to death a second time. When Diocletian wearied [of him] he sent him to the Emperor of Rome, and he wrote to him, saying, “This is a sorcerer, whose like I have never seen, and the like of whose sorcery I have never seen. And behold I have sent him to thee that, peradventure, thou mayest be able to persuade his heart to sacrifice to our gods.” When he came to the governor of Rome, they brought to him apparel of gold, but he would neither take the garments nor look at them. And the governor was wroth with him, but the saint was not afraid, and the emperor tortured him severely on the wheel, and he beat him and cut off his limbs; but God raised him up whole and uninjured, even as he was at first. Third martyrdom: And when the governor was tired of torturing him, he sent him to Maximianus in the city of Nicomedia, and he tortured him severely, but God put him and all his enemies to shame, and raised him up whole and uninjured. Fourth martyrdom: When Maximianus was tired to torturing him he sent him back to the governor of Kiras, the city in which he had been reared, and the governor tortured him very severely. Fifth martyrdom: The governor of Kiras sent him to the Emperor Tatianus, and the saint found many confessors there, and he comforted them, for the saint was perfect in his speech, and the grace of God was upon him; and the emperor tortured him severely. Sixth martyrdom, by the hand of Maximianus: And when they took him there, the saint found Ganikalawos, and many martyrs, and Maximianus tortured him severely. Seventh martyrdom by the hand of Lucian the governor, who tortured him severely, and then cut off his head; thus the saint received the crown of martyrdom. And a certain believing woman whose name was Sophia came and took his body, and prepared it for burial and buried it. Salutation to Clement.

And on this day also Saint Abba ‘Akaweh became a martyr. This holy man came from the country of the Fayyum, from a city the name of which is Bamay, and he fought a great fight in the ascetic life. And Satan appeared unto him boldly, and the saint seized him by the hair of his head, and punished him very severely; and Satan adjured the saint, saying, “By the Passion of Christ, release me.” And the saint sent him away and he disappeared in the form of smoke. Then the saint went to the governor’s house during the time of the persecution, and he cried out boldly, saying, “I am a Christian,” and the governor tortured him severely, and after this he cut off his head with a sword; and the saint received the crown of martyrdom in the kingdom of the heavens. And his body is at the present day in the monastery of Naklon, and many signs and miracles appear through it. Salutation to Abba ‘Akaweh.

And on this day eight hundred (sic) men of the company of Saint ‘Akaweh became martyrs. Salutation to you, O ye eight hundred martyrs.

Salutation to you, O ye company of men who pleased God, from among whom sprang Clement.

Salutation to Abraham, the servant of God, and Isaac, His friend, and Israel, His beloved.

And on this day also died Saint Joseph, son of the Jew Mahawe, This saint was an Israelite, and he grew up in the Jewish Faith, and learned the Books of the Jews. One day he saw the Christian children learning from a book, and he asked his mother to let him join them, and she permitted him to do so, and he learned all the Christian Books, and the Faith of Christ entered his heart. One day he met a young man who was a Christian, who loved him greatly and taught him the Christian Law at the time of the Eucharist, and Joseph received the Holy Mysteries. And on the following day [the children of] the readers, and the psalm-singers gathered together to Joseph, and they made with their apparel the similitude of a tabernacle and a shrine, and they brought bread from their parents’ houses, and they appointed an archbishop and bishops from among their number. Then they amused themselves, and celebrated the sacrament of the Offering, and then they went and ate and drank in the house of the priest, and he taught them and they remained thus. When the father of Joseph heard of this he was filled with wrath, and he bound the arms of his son behind him, and he took him into the tavern, and cast him into the red-hot oven which was there, and shut the door upon him; but the angel of God extinguished the fire and cooled [the oven]. And the mother of Joseph missed her son, and she wept and lamented and she did not know what to do. And after seven days and seven nights had passed, a certain John heard the story of Joseph, and how he was in the oven, and he went with his companions, and they wept for him, and cried out to him by his name. And Joseph said unto them, “Weep ye not, O my brethren, I am alive by the help of our Lady Mary, the mother of our Lord Jesus Christ, for it was she who hid me in her apparel in the red-hot oven.” When they heard this, they told the archbishop, and he went with the priests, and a Book of the Gospel, and a Cross, and censers, and he came into the oven, and made a prayer, and brought out Joseph unscathed from the midst of the fire, and untied his bonds. And Joseph asked him for Christian baptism. And when his father Mahawe heard of this, he fell down at the feet of the archbishop, and he believed on Christ, together with the men of his house. And Joseph continued to fast seven days at a time until he was eight and twenty years old, when he entered his cell. When he knew that his departure was nigh, he came into the church of Saint George the martyr, and he stood before the picture of our holy Lady, the Virgin Mary, and entreated her to make intercession for him with her Son. And she spoke to him from out of the picture, saying, “Rejoice, O Joseph, on the third day, at the third hour of the day, thou shalt die.” Salutation to Joseph.

And on this day also are commemorated Tabela and her three sons.

And on this day also God blessed seven (sic) loaves, and a few fish, even as it is said in the Gospel [Matthew xiv, 19].
Glory be to God Who is glorified in His Saints. Amen.