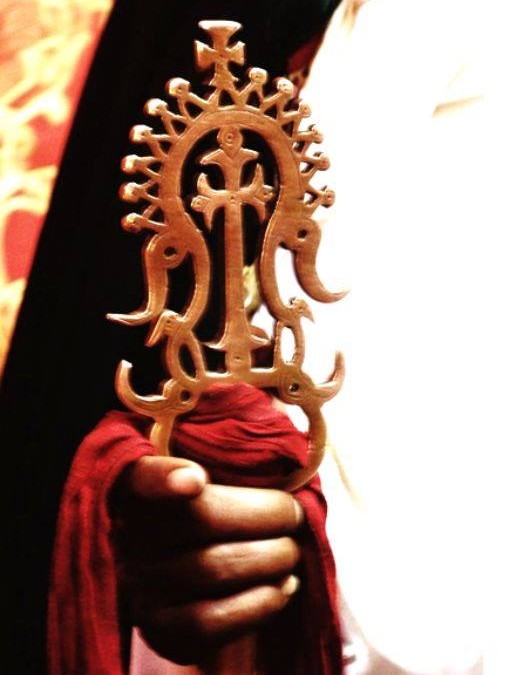 On this day died Saint Abba Longinus, abbot of the monastery of Zegag, which is outside the city of Alexandria. This saint was a man of Cilicia where he became a monk, and his teacher, who loved Christ, was a righteous monk, who fled from the approbation of men. At that time the abbot of their monastery died, and [the monks] wanted to appoint as abbot the elder Abba Lucianus, his teacher. And Abba Lucianus took his disciple Longinus, and they went forth from Cilicia, and came to a city of Syria, and they took up their abode in a church. And our Lord Christ did not wish that their righteousness should be hidden, for a city which is set upon a hill shall not be hidden; and God wrought many signs and wonders by their hands, and they received praise and honor from men. And Saint Longinus went forth from his teacher, by his advice, and came to the country of Egypt, and when he arrived at the monastery of Zegag, the monks welcomed him with joy, and he dwelt in that monastery until its abbot died. When the monks knew of the spiritual fight of the saint, and his good qualities, and virtues, and righteousness, they appointed him abbot of the monastery of Zegag. A few days later his teacher, the monk Abba Lucianus, arrived. And they used to make roofs of boats (awnings?), and they lived on the work of their hands; and they dwelt together, single-heartedly, for many days, and God performed many signs and miracles by their hands. And then Abba Lucianus died. Now the assembling of the Council of Chalcedon took place in the days of Marcianus, the infidel, and he sent messengers into all the countries with the Book of the unclean Faith, which attributed to Christ two Natures. And three of his envoys having come to the monastery of Zegag, and given a copy of that Book to Abba Longinus, they said unto him, “The Emperor Marcianus hath commanded that ye shall believe what is written in this Book.” And Saint Longinus said, “I can do nothing without the advice of the holy fathers; come with me that we may take counsel [with them].” And he brought the messengers of the emperor into the cave wherein were the bodies of the holy elders, and he laid that Book upon them, and he said unto them, “O my fathers, say ye not that ye have lain down in death, and are at peace. Behold, they have brought this Book wherein is written the unclean Faith, which assigneth to Christ two Natures. Do ye command me to subscribe thereto, and to believe its words, or not? If ye do not tell me what I shall do, as God liveth, I will cast out your bones from this place.” And a voice came forth from their bodies, and all the men heard it, saying, “Forsake thou not the True Faith of our fathers the Apostles, and of our fathers the Three Hundred and Eighteen; and follow not the unclean Book, and remove it from our bodies.” And when the envoys of the emperor heard these words they marveled exceedingly, and fear and great trembling fell upon them, and they did not return to the emperor, but they shaved the hair of their heads, and became monks in that monastery; and they lived there for many years and died there. And Saint Longinus having finished his good fight, at a ripe old age, and pleased God, died in peace, and received a crown of martyrdom.

And on this day Thomas made manifest a miracle when he went forth to preach where our Lord commanded him to go. And when he drew nigh thereto, and had come within two stadia of the city, he turned aside from the road and saw by chance a dead young man, and his appearance was very godly. And the apostle said, “My Lord, was it that I might experience this trial that Thou didst bring me hither? But Thy Will be done.” And having said this he prayed much for the dead man, and straightway there came forth from the side of a stone a great serpent which lashed the ground with its tail, and cried out with a loud voice, saying, “What have I to do with thee, O apostle of Christ, thou hast come to annul my work?” And the apostle said unto him, “Yea, speak.” And the serpent said, “There was a beautiful woman [who came] from the vineyard, and I saw her and loved her. Then I found this young man kissing her, and consorting with her on the day of the Sabbath; but it is unnecessary for me to describe before thee all the wickedness, which he committed. I knew that he was an associate of Christ, and therefore I killed him.” And the Satan who ruled over the serpent told the apostle all the evil, which he used to do to the children of men. Then the apostle anathematized him in the Name of Jesus Christ, and commanded him to withdraw the poison from the [dead] man. And straightway the serpent blew himself out, and burst asunder and died, and the young man leaped up and embraced the feet of the apostle and recovered. And in this place the apostle made the people to believe, and he built them a church. Then the apostle went into the city with the young man whom he had raised from the dead, and as they were standing and talking to the people of that place, a young ass came and stood before him, and he opened his mouth and said, “O associate of Christ, and apostle of the Most High, who knoweth the things which are hidden, thou companion of the Son of God, come return thou to Him that sent thee, God. Get up, and mount upon my back, and rest until thou enterest the city.” And when the apostle heard him he marveled exceedingly, and he praised God, and said unto the ass, “To what race dost thou belong that thou speaketh such deep mysteries?” And the ass said unto him, “I am a descendant of the offspring of the ass which was in the service of Balaam, and the ass whereon thy Lord and Teacher rode was descended from him, and was my father. Now as for me, I have been sent to give thee rest and for thee to mount upon”; and the apostle refused to mount upon him. And when the ass had made many entreaties to him, the apostle mounted upon him, and he came to the gates of the city with many people following him; and he alighted from the ass, and said unto him, “Depart, and take heed whither thou departest,” and straightway the ass fell down and died. And those who saw this were dismayed, and they said unto the apostle, “Make him to live and raise him up.” And the apostle said unto them, “I could raise him up by the power of my God, but it is better for him so”; and he commanded them to dig a hole in the ground, and to bury him, and then he gave them the salutation of peace and departed from them. Salutation to Thomas.
Glory be to God Who is glorified in His Saints. Amen.