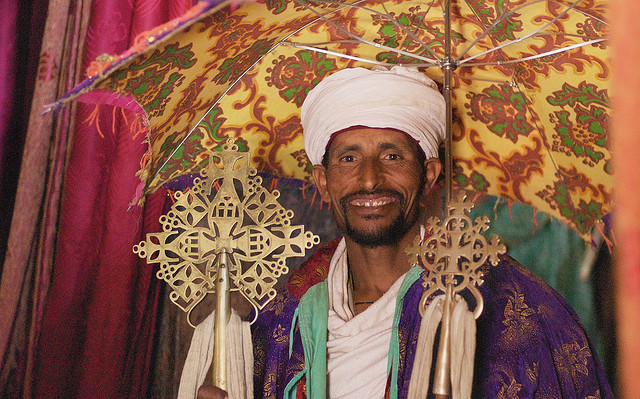 On this day the holy apostle Agabus became a martyr. The Lord chose this disciple among the Seventy-two disciples whom He chose and sent forth to preach before His Passion. And this man was filled with the Holy Spirit, the Paraclete, for he was with the Twelve Apostles in the upper room of Zion. And God gave him the gift of prophecy, even as it saith concerning him in the Book of the Acts of the Apostles, that he took the girdle of Paul and bound his own feet therewith, and said, “Thus saith the Holy Spirit: The Jews shall take the man who is the owner of this girdle, and shall bind him thus in Jerusalem” (Acts xxi, II); and this prophecy was fulfilled. Then he preached with the Apostles the preaching of the holy, and life-giving Gospel, and he went into many cities preaching, and teaching, and pointing out the way of God; and he converted many Jews and Greeks to the knowledge of our Lord Jesus Christ, and he purified them with life-giving, Christian baptism. And the Jews seized him in Jerusalem, when he was alone, and they beat him severely and made him suffer. Then they put a rope about his neck and dragged him outside the city, and stoned him with stones until he delivered up his soul. And straightway there descended upon him a light which appeared to be like a pillar, and reached from his body to heaven, and all the people were looking upon him. And God opened the heart of a Jewish woman wherein there was no evil, or enmity, or deceit, or jealousy, as [is usual] with the cursed Jews, and she kept the Law of the Torah, and she said, “This is a righteous man, and for this reason light hath descended upon him, and God hath magnified him.” And she cried out, saying, “I am a Christian, and I believe in the God of this saint.” And her also they stoned with stones, and she died and was buried with the saint in one grave. Salutation to Agabus.

And on this day died Abba Zachariah, whose works were excellent, and whose spiritual fights were very great. When the soul of this man was about to go forth from his body, Abba Moses said unto him, “What dost thou see?” And he said unto him, “It is better for me that I keep silence.” And when his soul went forth Abba Isidore saw the heavens opened, and [the angels] said, “Rejoice, O my son Zachariah, for behold the gates of the kingdom of heaven are opened unto thee”; and thus he died. Salutation to Zachariah.
Glory be to God Who is glorified in His Saints. Amen.