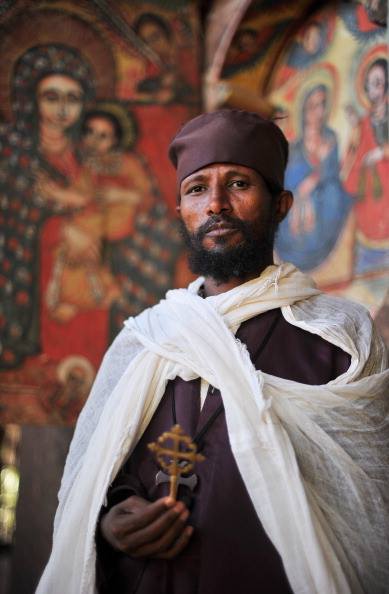 On this day died the holy father, the great one, Abba Barsoma, the Syrian, the father of the monks of the country of Syria. The parents of this saint were of the people of the city of Samisot. And a certain dweller in a cell prophesied concerning him, and said unto his father before his birth, “Assuredly there shall go forth from thee a fruit of flavor and excellence, and the memorial of him shall be heard in all the country of Syria” ; and he made him to know what would happen to him. And having been born Barsoma grew up in the knowledge of God, and he fled from his parents, and came to the River Euphrates; and there lived there a certain righteous man, whose name was Abraham, and he took him into the monastery through fear of his father.

And Saint Abba Barsoma dwelt in a rock, and he fought a great fight there, and his fame was noised abroad everywhere, and he had many disciples. Now the water of the place where he lived was exceedingly bitter, and when he had prayed [over it] God changed it, and it became sweet. And God performed great signs and wonders by his hands, and among them are the following : Once he and his disciples were a long way from their cells, and when the time of sunset drew nigh they were still far away from their cells. And he asked our Lord Jesus Christ, and He made the sun to stand still until the saint arrived in his cell. And again there was a city, the name of which was Ra’am, whereof the people were infidels, and by the Will of God the rain was withheld, and no rain fell on them. And being in tribulation they came to Saint Barsoma, and he admonished them, and he made an agreement with them that if they would believe in God, he would make an abundant rain to fall upon them; and they said unto him, “Yea, we will.” And he asked our Lord Christ, and He rained on them, and they believed on God.

And there was also another city, the people whereof were infidels, and he converted them all to the knowledge of God, and he destroyed many houses of idols. And this saint made for himself an abode, wherein he stood upright and never sat down for four and fifty years, and when he was tired of keeping vigil and toil he slumbered standing up, with a brass vessel under his hand on which to lean; and he fasted seven days at a time. And this saint lived in the days of Abba Simeon of the Pillar, and he wished to see him greatly, for he had heard the report of his holiness and virtues from many men. And this holy man came to Abba Simeon, and each was blessed by the other, and then he returned to his monastery. And he preached in the city of Samaria, and when he wrought before the people many signs and wonders, they believed.

And he went to the Emperor Theodosius, and strengthened him in the True Faith, and the emperor gave him much money, but he would accept nothing whatsoever from him. And the emperor wrote an order that the saint was to have dominion over all the bishops in the country of Antioch, and he gave him the ring from his fingers. And when the General Council of Two Hundred Bishops assembled in the city of Ephesus, on account of Nestorius, the “denier,” and they anathematized him, and cursed him, and cut him off [from his office], this father was with them. And the emperor wrote to him with his own hand, commanding that all the officials who were appointed in the country of Antioch were to be in submission to him; and Barsoma wrote letters to all the cities, and sealed them with the imperial seal, and commanded them to do good works, and to hate evil men. And certain men calumniated him to the emperor, and said unto him, “Behold, Abba Barsoma eateth well, and drinketh well, and weareth fine apparel”; and the emperor sent one of his messengers to find out if what was reported of Abba Barsoma was true.

And when the emperor’s friend came to the saint, he did not find that even the smallest particular of the evil things which they had spoken about him was true. And then he brought him before the emperor, who did not find that he had changed any of his spiritual qualities, of which he had knowledge, and the emperor paid him great honor, and he returned to his monastery. And when the Emperor Marcianus, the infidel, assembled the Council of Chalcedon, the councilors of the emperor asked him to allow them to bring Barsoma to them, now they did not know that the grace of the Holy Spirit was upon him, and that he might neither dispute with them, nor overcome them in argument, nor put them to shame. And when the unclean General Council, wherein they separated Christ, and assigned to Him Two Natures, was ended, the blessed Barsoma argued against them, and made their words of no effect, and he anathematized them and excommunicated them. And they wrote to the emperor and calumniated Barsoma, and he made him come, but he was not able to resist the grace of the Holy Spirit which was upon him. And then Abba Barsoma cursed the empress, and she departed; but she only remained alive for a few days, and she died an evil death.

And the heretics opposed him, and they wrote to all the cities, urging the people not to submit to him; but they did not listen to them, and did not abandon the command and doctrine (or, teaching) of the saint. And three hundred heretics banded themselves together, having with them the heretical bishops, and they lay in wait on the road to kill him; and then they sent a message to him telling him to come to them, so that they might go to the church together. And when he had come, and was journeying along the road with them, they cast stones at him, and their stones flew back on their own heads; and they fled and departed from him, being ashamed.

And then God, wishing to take him out of the bondage of this world, sent unto him an angel who said, “After two days thou shalt depart from this world.” And Saint Abba Barsoma sent his disciple to the cities which were round about him, and he comforted the believers; and as the disciple was going about he came to a place wherein was the head of Saint John the Baptist, and he saluted his holy head. And he wept, and he asked it about the Emperor Marcianus, and a voice came forth from the head of Saint John the Baptist, saying, “Fear not, for he is dead; Barsoma complained of him to God.” And Saint Abba Barsoma blessed his disciple, and he died in peace. And a pillar of light appeared by the gates of his cell, and [it reached] to heaven, and all the believers saw it from afar off, and they came to the saint, and they found that he was dead. And they were blessed by him, and they wept over him, and sorrowed because of their separation from their spiritual father. And they prepared him for burial in a manner befitting him, and with the singing of many psalms and hymns they laid him in the grave. Salutation to Barsoma,
the “son of fasting.”

And on this day also Saint Paul the Syrian became a martyr. The parents of this holy man were Syrians, and they were merchants, and lived in the city of Alexandria, wherein they begot this saint; and then they lived in the city of ‘Esmunain. When he was grown up, his parents died and left him much money. When he heard that the heretic emperors tortured the believing saints who believed on the Name of Christ, and killed them, he gave all his money to the poor and needy, and then he prayed, and asked our Lord Christ to direct him in the path which would please Him. And God sent to him Suriel, His angel, and he told
him about all the torture which should come upon him for the sake of the Name of Christ. And he said unto him, “Behold, God hath commanded me to be with thee, and to strengthen thee; fear not.” And he rose up and went to the city of Antinoe, and confessed our Lord Jesus Christ before the governor, who commanded the soldiers to strip him naked and to beat him with whips, and they did so; then they thrust burning torches into his sides, but the fire did not touch him. And the king offered to him much money, so that he might deny Christ.

And the blessed Paul said unto him, “When my parents died they left me sixteen (or, seventeen) maklit of gold, but I reject them and would not take them, because of [my] love for Christ; how then can I accept thy money?” And the governor commanded them to make iron rods red-hot, and to thrust them into his ears, and mouth, and they did so; and God sent His angel Suriel to him, and he touched his body, and healed him. And they put upon his body venomous serpents, but they would not touch him. And the governor commanded them to cut out his tongue, and they cut it out, and God healed him. And when the governor went to the city of Alexandria, he took Paul with him; and our Lord Christ appeared to him in the ship and comforted him, and strengthened him. And the saint had a friend whose name was Abba ‘Esi, and Takla his sister, and our Lord Christ told him that his body should be laid with their bodies, and his soul with their souls; now these saints were in prison in the city of Alexandria. And when Saint Paul had come unto them, they embraced each other, and their souls rejoiced at seeing him. And when the governor returned to the city of Antinoe, they cut off the head of Saint Paul and threw it on the riverbank, and he received the crown of martyrdom. And certain believing men took his body, and wrapped it up in costly cloths, and hid it in their houses; and many signs and wonders and many healings took place through it. Salutation to Paul. Salutation to the
translation of thy body.

And on this day is celebrated the commemoration of Peter the martyr.