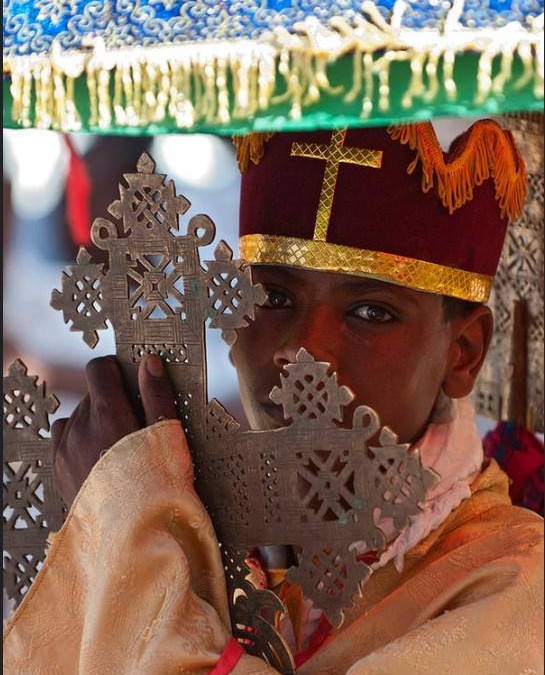 And on this day the holy and honorable Abba Belanteyanos, Archbishop of the city of Rome, became a martyr. This honored and learned and wise saint and fighter was appointed Archbishop of the city of Rome, and he sat upon the throne of Peter, the chief of the Apostles, for twelve years in quietness and peace; and he taught the people the beauty of piety, and he preached to them the Faith of righteousness. And Claudius, the emperor and governor, having risen up against the Emperor Philip, and killed him, and began to reign in his stead. This infidel stirred up great trials and many tribulations for the believers, and he martyred very many people. And the Seven Children, who are known to have slept in a cave for many years, fled from him. He built in the city of Ephesus a great temple wherein he established idols, and he killed all those who would not worship them. And when he heard that this saint was opposed to them, and that he taught the believers to obey him he sent to the city of Rome, and had him brought to Ephesus, and asked him to worship idols; and the saint would not obey him, but laughed at him and his idols, and cursed them. And the governor was angry with him, and tortured him severely, for the space of one year, and when he was tired of torturing him he cut off his head with a sword, and the saint received a crown of martyrdom in the kingdom of the heavens. Salutation to Belanteyanos.

And on this day also died Abba Eulog (Eulogius), the writer and companion of lions. The parents of this saint were from the city of Gasbin (Nisibis), and they were rich in gold and in silver, and they taught their son all the Ordinances of the Church; after a few [days] they died, and left him much money. One day Abba ‘Eulog (Eulogius) remembered the word of the Gospel which saith, “Sell all thy goods and give [the price thereof] to the poor and needy, and take up My Cross, and come, follow Me” (Matthew xvi, 24). And straightway he gave away all his goods to the poor, and departed to the monastery of Awgin; and when
‘Awgin saw him, he received him with joy, for before ‘Eulog (Eulogius) came to him he saw a vision in which one said unto him, “Behold a young man of goodly appearance will come unto thee, receive him, and let him mix with the brethren who minister unto thee”; and ‘Awgin continued to counsel him for the space of three years. When he saw his holiness, and his perfection, he arrayed him in the garb of the monk, which is the dress of the angels. And ‘Eulog (Eulogius) toiled hard in the ascetic life, and he fasted from one Sabbath to the next, and his food was bread and salt. And he used to pray six (or, seven) hundred prayers by day and night, and did not sleep, and he continued to fight this fight for thirty years, and then he entreated his teacher [to be allowed to go into the desert]. And he departed to the desert, and went into a little cell, wherein he fought the fight for fifty years; and God gave him two lions, which ministered unto all his wants. And then he became sick with a grievous sickness, and he said unto the lions, “I want to drink some hot water.” And the lions went into the mountain, and they found a shepherd who was watching his flocks, and [one of the lions] took this shepherd up and brought him to the door of the cell of the holy man. And when the shepherd saw him, he bowed low before him, and said unto him, “What dost thou want, O my father?” And ‘Eulog (Eulogius) said unto him, “Give me some hot water to drink”; and the shepherd supplied his want, and then Abba ‘Eulog (Eulogius) commanded the lion to take the shepherd back to his dwelling. And when the shepherd arrived he told all the people about it, saying, “I found a righteous man, for the sole of whose foot the world is not [large enough?].’ And when they heard the
report of him, all the people gathered together to him, and they brought to him all those who were sick, and he healed them. And in those days his teacher Abba ‘Awgin wished to go to the country of Fars (Persia), and to convert those who worshipped idols to the True Faith, and he wished to take with him his son Abba ‘Eulog (Eulogius), but before he sent him a message to this effect, the Holy Spirit made the lion to understand, and the lion carried the cloak and the Gospel of the holy man, and made him signs concerning the road, and the saint followed him, and arrived at the place where Mar ‘Awgin was; and when ‘Awgin saw him, he received him with gladness. And as they were traveling along the road they came to the River Tigris, and the waters thereof were divided for them, and they passed over. And when they arrived in the city, they converted the worshippers of idols to the True Faith, and baptized them in the Name of the Father and of the Son and of the Holy Spirit. One day when the holy men were hungry Mar ‘Eulog (Eulogius) commanded the lions to seek some food for them, and when the lions had set out they found al old man carrying a load of bread on a donkey, on which was a child; and the lions took this donkey and brought him to the holy men. Now the child died of fright, but when Abba ‘Eulog (Eulogius) had prayed, he restored him to life. And then he returned to his cell, and fell sick a little, and he died and was buried with great honor. And the lions continued to watch by his grave for twelve years, and then they returned to the desert. Salutation to ‘Eulog (Eulogius), the companion of lions.

And on this day also is celebrated the commemoration of Abraham the bishop, and Kanti, and Abba Makabis (Maccabaeus) the monk.  And on this day also died Abba Patra (Batra), the disciple of Abba Sylvanus. This saint used to live in a cell of Dabra Sina keeping the precepts of the doctrine, and at the time of supper he used to give to his body what it needed. And when they made him Bishop of Farnu he exhausted himself greatly by excessive abstinence, and his disciples said unto him, “O our father, if thou wast in the desert thou couldst not use such excessive abstinence.” And he said unto them, “When I was in the desert, in poverty, [and living upon] fragments, I ordered myself so that my body was never sick; but now that I am in a community I have many wants, and it is best for me to reduce my body and keep it in subjection.” And he continued to fight the fight strenuously, and then he died. Salutation to Abba Patra.