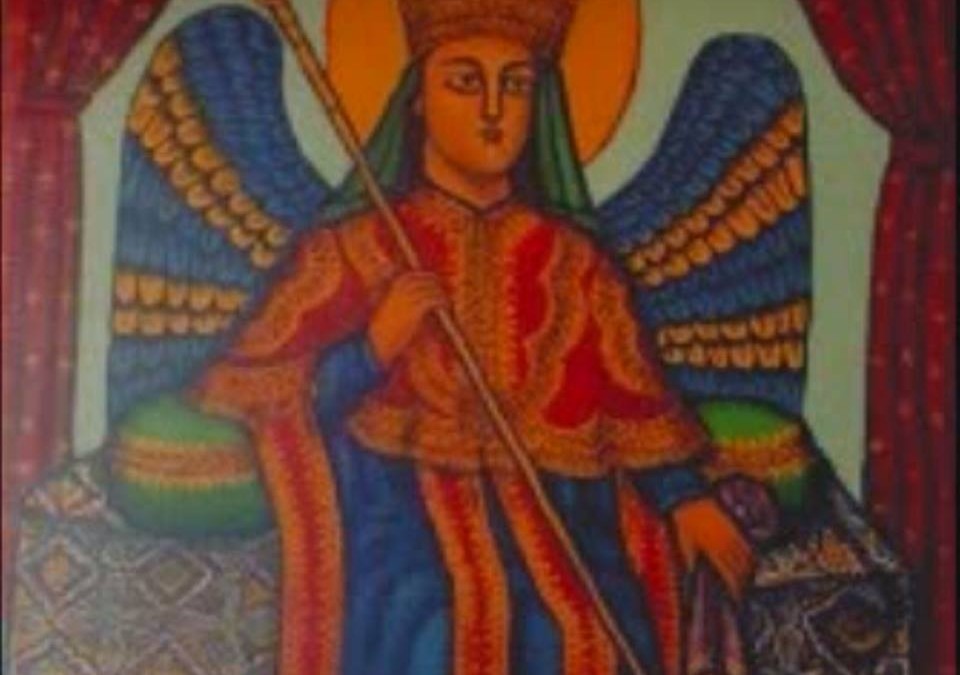 On this day is commemorated the glorious angel, Michael the Archangel, for on this day God sent him to Samson the giant, and helped him until he conquered the Philistines. They wanted to kill him, and God gave him power over them, and he blotted them out and in one day killed of them ten hundred with the jawbone of an ass. And when he was thirsty, and nigh to die, Michael the Archangel appeared unto him, and strengthened him, and God made water to flow out from a Jawbone, and he drank and was saved. And when a crowd of the Philistines assembled, and devised a scheme against him with his wife, and blinded his eyes and took him into the house of idols, the angel Michael appeared unto him, and gave him strength and he killed them all. Salutation to Michael.

And on this day died the holy father Gelasius, the fighter, and devoted man of God. This saint had believing and God-fearing parents, and they taught him all the Ordinances of the Church. And he was made a deacon, and he renounced the world from his early years, and he bore the yoke of Christ, and fought a great and strenuous ascetic fight, with fasting, and prayer, and prostrations, and vigils. And God chose him, and he was made priest of the monks of the desert of Scete. And having perfected his spiritual fighting, and his devotion to God, and his piety, the angel of God appeared unto him as he appeared unto Saint Pachomius, and commanded him to gather about him young monks, and to teach them the fear of God, and the way of the ascetic life; and he did as the angel of God commanded him. And he gathered together monks, and established a spiritual companionship, and he ruled them with a divine rule. And he was not among them as one of them, but as their servant, and as one who was less than they. This father rejected the possessions of this world, and he was exceedingly meek. And he copied a large book wherein he collected all the Books of the Old and New Testaments, and he spent [on this book] of the money which he made by his copying, eighteen dinars of gold, and laid that book upon the altar in the church so that all the monks might read therein whensoever they required healing from it. And there came a certain wandering monk to visit the elder Abba Gelasius, and when he saw the book it pleased him, and when he left that place he stole it, and carried it off, and after he arrived in the city [he tried] to sell it. And a certain man said unto him, “How much is its price?” And the thief said unto him, “Give me sixteen dinars in gold”; and he who wanted to buy it said unto him, “Yea, I will give thee what thou sayest, but wait for me whilst I shew it to my friend.” And the thief gave him the book, and the man who wanted to buy it took it to Saint Gelasius to shew it to him, so that if it was good he might give the price of the book to the owner thereof. And when Saint Abba Gelasius saw the book, he said unto him that had brought it, “How much is the price which he demandeth from thee?” And the man said, “He demandeth from me sixteen dinars of gold.” And Saint Gelasius answered and said unto him, “Buy [it] for it is a good [book], and the price thereof is little”; and the man took the book, and carried it to his house. And when the thief came to him demanding the price of the book, the man who wanted to buy it did not tell him what this father had said to him, but he said, “I showed it to Abba Gelasius, and he said unto me, ‘Its price is much.’” And the brother who stole the book said unto him, “Did not the elder say unto thee anything else?” And the man said unto him, “Nothing else.” And the man who stole the book said unto him, “I do not wish to sell the book,” and he took it and departed to Saint Gelasius, and he bowed low to him, and repented, and wept before him, and he asked him, saying, “Forgive me my sin, and take thy book, for Satan led me astray”; and the saint said unto him, “I do not want to take it.” And that brother said unto him, “If thou dost not take it I shall never have rest, and sorrow will never be removed from me”: and he made many prostrations at the feet of the saint, and he besought him to have mercy upon him, and to take his book from him. And with great labor and toil the saint took the book from him, and no man knew what became of it. And God gave unto this father Gelasius the gift of prophecy, and the power to work signs and wonders. One day certain men brought a fish to the monastery, and the cook boiled it and put it in his cell, and having set a boy to watch it he went about his business; and the boy ate the greater part of he fish. And when the cook came back, and found that the boy had eaten [the greater part] of the fish, he was wroth with him, and he said unto him, “Why did you eat of the fish before the holy elder had blessed it?” And after this, by the work of Satan, wrath came upon him, and he kicked him with his foot, and the boy fell down upon the ground and died. And when he saw that the boy was dead, he was greatly dismayed, and fear came upon him, and he went and told the elder Gelasius what had happened. And the saint said unto him, “Take him up, and lay him in the sanctuary”; and the man went and did as the elder had commanded. And when the holy elder came into the church, they prayed the evening prayer, and when they had finished the prayer, the elder went forth from the sanctuary, and the boy was following him, and none of the monks knew what had happened. And the elder laid a penance on the cook, and commanded him to tell none of the monks about this until after his death. And Saint Abba Gelasius having finished all his good work, and his excellent fight, the time for God to comfort him arrived; and he departed from this fleeting world, and left behind an excellent remembrance; and he pleased God, and died in peace. Salutation to Gelasius.