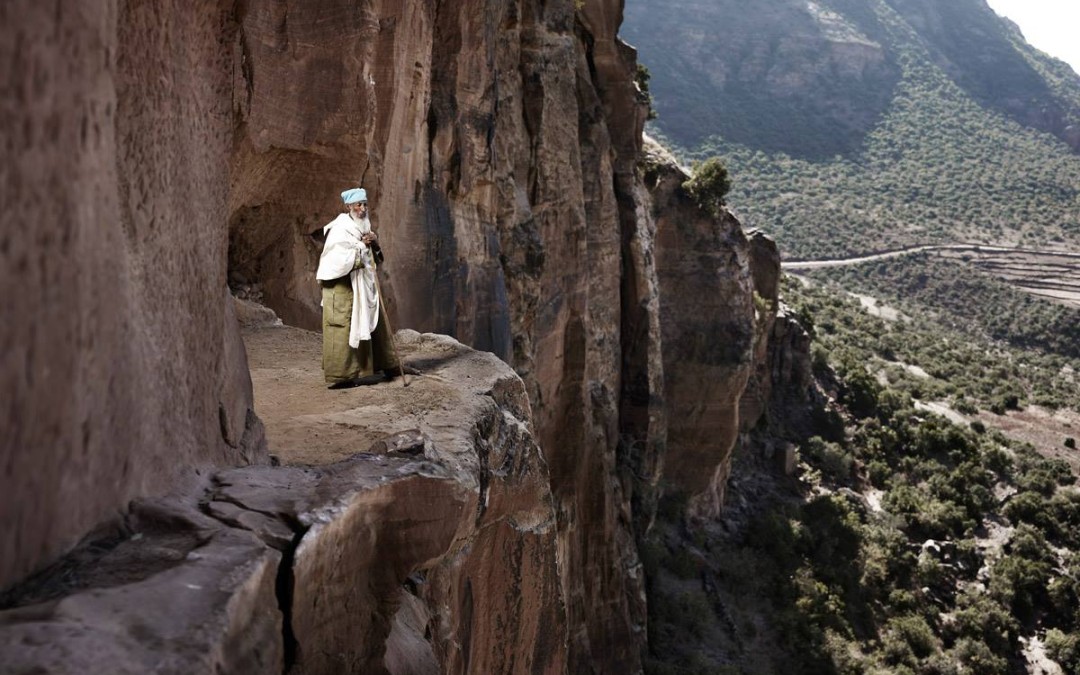 On this day the holy and honorable Sergius became a martyr, and with him were his father, and his mother, and his brethren, and many men from the city of Athribis. This saint had excellent parents; his father’s name was Theodore, and his mother’s name was Mary. And when his days were twenty years, he determined in his heart to die for the Name of our Lord Jesus Christ, and he came to Cyprianus the governor, and confessed our Lord Jesus Christ before him. And the governor commanded the soldiers to inflict every kind of torture upon him, and to shut him up in prison. And our Lord Jesus Christ commanded the angels to carry away his soul into heaven, and he saw the habitations of the saints, and his soul was comforted, and Christ healed him of his sufferings. And a certain priest whose name was Abba Masun heard of his fight, and two deacons also, and they rose up and came to the governor of the city of Athribis, and confessed our Lord Christ. And the governor commanded the soldiers to beat them, and they did as he commanded them, and all the people were looking on at them, and they walked round about them, and they were sorry for the deacons and the priest. And the priest rebuked them, and turned his face to them, and he taught them, and commanded them, saying thus, “Be strong in the True Faith of our Lord Christ.” And then he prayed over some water, and sprinkled it upon them. And the grace of the Holy Spirit descended upon them, and they confessed our Lord Christ; and the soldiers cut off the heads of all of them with the sword, and they received the crown of martyrdom in the kingdom of the heavens. The governor commanded the soldiers to cast the priest into the furnace of the public baths, but God delivered him there from. And the angel of God appeared unto him, and made him to know that he would be martyred thrice for the sake of Christ, and then the angel of God brought him out of the furnace. And the governor sent him to the city of Alexandria, and he finished his fight there, and received the crown of martyrdom in the kingdom of the heavens. And Cyprianus, the governor, had Sergius brought before him, and he tortured him with severe tortures, and then they brought a wheel of brass, and they crushed him, and his members became two parts, and all his body was torn asunder; but our Lord Christ raised him up whole and uninjured. Then they brought unto him an idol for him to worship, and the saint spurned it with his foot, and it fell down, and was broken in pieces. When Cyprianus saw this he believed in our Lord [Jesus] Christ. And he said, “The god who could not save himself, how can he save others?” And Eucheius, the captain of the soldiers, tortured Saint Sergius very severely, and he told the soldiers to flay him, and to rub him with vinegar and salt mixed together; but Christ gave power to the saint, and he was strong. And when his mother and his sister heard [of this] they came to him, and when they saw him they wept over him, and his sister delivered up her spirit through her excessive grief for him. And the saint prayed to God, and his sister rose up from the dead, and became alive straightway. And Saint Julius, of the city of ‘Akpihas, the writer of martyrdoms, came to him, and he enquired about his body, and would bury it. And then Eucheius commanded them to torture Saint Sergius on the wheel, and to thrust burning torches into his ears, and to pluck out the nails of his hands and feet, and to suspend a huge stone from his neck, and to lay him upon the iron bed and to light a fire beneath him; and they did these things even as the captain commanded, but our Lord Jesus Christ strengthened him, and healed his wounds, and raised him up whole and uninjured. And the captain of the soldiers being weary of torturing him, he commanded them to cut off his head with the sword; and when the saint heard this he rejoiced exceedingly. And he sent a message to his father, and his mother, and his brethren, and all his kinsfolk and the men of his household, and they came to see him and they found him with a gag in his mouth. And the soldiers were dragging him away to cut off the head of the saint and the heads of all those who were with him; and they cut off their heads and the saints received the crown of martyrdom in the kingdom of the heavens. Now there was a little child among the people, and God opened his eyes, and he saw the souls of the holy martyrs, and the angels carrying them up into heaven, and he cried out with a loud voice, saying, “My Lord Jesus Christ have mercy upon me.” And his parents were afraid lest the governor should hear him, and destroy them because of him, and they shut his mouth, as he continued to cry out and to call upon our Lord [Jesus] Christ, and then they laid stones upon him until he delivered up his soul, and received the crown of life in the kingdom of the heavens. And the angels took his soul, and carried it up into heaven. Salutation to Sergius, whose nails were cut out with knives.

And on this day also died Philemon the musician. This Philemon the musician used to sing and play to Arianus the governor, and amuse him. And one day Arianus called Apollo the reader and said unto him, “Sacrifice to the gods.” And Apollo went to Philemon, and said unto him, “I will give thee four dinars if thou wilt sacrifice instead of me.” And Philemon said unto him, “Give me thy garments, and I will wrap my self up in them, and go in instead of thee.” And when he went in Arianus knew that he was Philemon, and he said unto him, “What hath happened unto thee?” And he said unto him, “I am a Christian and I believe in Christ.” And Arianus said unto him, “Sacrifice to the gods, so that thou mayest live”: and Philemon said unto him, “Is not this life death because of the Name of Christ?” And Arianus said unto him, “I will kill thee quickly, before thou canst receive baptism, and that for which thou hopest will be lost to thee.” When Philemon heard this, he prayed to God to grant to him Christian baptism, and straightway a cloud of light came from heaven and baptized him. And Arianus commanded three soldiers to smite Philemon, so that he might be ashamed and repent. And Philemon said unto him, “I shall not be ashamed, even if thou smite me more severely than this, for I see that the angels of God rejoice because of me.” And Arianus commanded them to hang him up on a framework, and to shoot arrows at him, but not one of them touched him. And when the soldiers told Arianus that he was still alive, he commanded them to shoot at him again, and as he was standing [there] one of the arrows came down into the right eye of Arianus, and blinded it. Then straightway he commanded them to take him down from the framework, and to cut off his head and the head of Apollo the reader with the sword, and they finished their martyrdom patiently. And Arianus took a little of the blood of these saints and put it in his eye, and he recovered his sight, and straightway he believed on Christ. And he released all the prisoners, and became a martyr by the hand of Diocletian. [This section is wanting in the Bodleian MS.]

And on this day also died Saint Abba Timothy, the thirty-second Archbishop of the city of Alexandria. To this father and fighter came tribulation, and great trial, because of the True Faith. And Abba Severus, Archbishop of the city of Antioch, came to the country of Egypt in those days, and he went about from city to city, and from monastery to monastery, and from one religious house to another with Abba Timothy, strengthening the believers. And in the days of this father there appeared in Egypt certain evil men who had come from Constantinople, and who were of those who believed in the opinion of Eutyches, the unclean, who confessed the teaching of error and denied the Passion, and the Resurrection of Christ our Redeemer, and this father anathematized them, and drove them out of Egypt, and he anathematized those who believed in their words. And in the days of this father Anastasius the emperor of the believers died, and Justinianus the infidel, the Chalcedonian, reigned in his stead; and he made Linarius archbishop in the place of Abba Timothy. And he wished to convert all the men of the True Faith to the evil faith of the Council of Chalcedon. And he gathered together a Council in the city of Constantinople, and brought there Abba Severus, Archbishop of the city of Antioch, and his bishops from the country of the East, and wanted them to believe in the unclean faith of Chalcedon, but they would not obey him. And he brought great tribulation upon them, and upon all those of the True Faith; and this father sat for sixteen (or, seventeen) years and died in peace. Salutation to Severus the lion.

And on this day also became martyrs Theodore, the son of Basilides, and Abba Kaphes (Kefses), and Abba Hephes (Hepes).

And on this day also the birth of Victor the martyr took place.