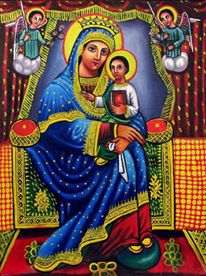 On this day is commemorated our holy Lady, the Virgin Mary, the God-bearer. Salutation to thee, O Mary, thou light of life.And on this day also died the holy father Abba Gabriel, the sixty-seventh Archbishop of the city of Alexandria. This father became a monk in his early years in the desert of Scete, and he fought a great fight, and he devoted himself to the ascetic life for many years, with fasting, and prayer, and prostrations, and vigils, and hunger, and thirst; and he was humble, and simple, and loved to live by himself. One day there came into his cell a certain elder, whose name was Maximus to be blessed by him, and Gabriel prayed over him and he went forth to depart to his own place. And the holy elder Maximus laid hold upon him, and said unto him, “O my son, why dost thou flee from men, for thou wilt be obliged to dwell among many men and women”; and this father did not understand the meaning of the words of the elder, and he wept frequently, and entreated God to deliver him from the nets of the Enemy. And when Abba Michael, the Archbishop, his predecessor, died, they seized this father and against his will made him archbishop, even as the elder had prophesied concerning him. And having been appointed he did not become slothful in his office, and he did not abandon his spiritual fight, or his strenuous ascetic life, nor his piety; and he dwelt continually in the desert of Scete. And when affairs connected with the work of the churches compelled him to go to the city of Alexandria and to Mesr (Cairo), he used to go quickly, and return to the desert of Scete. When he was in the youth of his days the lust for fornication used to bestir itself in him, and [although] he increased his fasts and vigils in order to subdue the lust, he was unable to do so; and he confessed this to a certain elder in the desert of Scete. And that elder said unto him, “Nothing will destroy lust except humility, coupled with fasting, and prayer, and prostration, and vigils, and those alone will save [a man] form it.” When he heard this he made himself a shovel of iron, and he used to get up in the night and dress himself in mean and ragged garments, and go round into all the cells of the monks, and clear out the offal from them and take it away, and cast it out at a great distance from the cells. And he continued to do this kind of work for a period of two years, when God saw his purity and the humility of his heart and removed from him the natural lust for fornication. And this father continued to lead the ascetic life and to fight the fight, and he admonished and taught his people, and strengthened them in the True Faith for a period of eleven years; and he died in peace. Salutation to Gabriel for his righteousness and faith.

And on this day also died the holy father, Abba Zachariah, Bishop of the city of Saha. This saint was one of the children of those skilled in the Law, and his father abandoned the Law, and was made a priest; and his name was John. And when the son of John had grown up, and had studied the profane learning and the philosophy of the pagans, and the Law of the Church, the captain of the king’s host took him and made him a scribe in the house of the king. And he had a friend in the Law, whose name was Ptolemy, and who was governor of the city of Saha; and they agreed together to go to the desert of Scete and to become monks. And at that time there visited them a certain monk from the monastery of Saint Abba John of the desert of Scete, and they made an agreement to go there with him; and when the governors heard of this they sent and prevented their going. And having tarried a few days they saw a vision, and it seemed as if one said unto them, “Why do you not fulfill the vow which ye have vowed to God?

And they rose up straightway, and went forth in secret, but they did not know the way, and a monk appeared unto them and guided them, and brought them to the monastery of Saint Abba John, of the desert of Scete. And when the governors heard of their departure, they agreed that they would obtain an order from the king and send it with messengers to make them to come down from the monastery; but God scattered their counsel. And when Zachariah and Ptolemy had become monks, they fought the fight and followed the ascetic life strenuously, especially Zachariah. And in their days lived the elders Abba Abraham and Abba Ga’Argi, and they used to visit the young men, and give them advice concerning all their works. When the Bishop of the city of Soha died, the people remembered Saint Abba Zachariah, and they wrote a letter to the archbishop on his behalf, asking him to appoint him to be their bishop. And the archbishop sent to the desert of Scete and had Zachariah brought against his will, and he appointed him Bishop of the city of Soha. And whilst the archbishop was laying his hand upon him, he saw the power of God descend upon him, and his face was wreathed with light. And when he came to the throne of his office the people rejoiced in him with great joy, and they went out to meet him as [the men of old] met our Redeemer on the festival of Hosanna {Palm Sunday); and the Church was resplendent through him. And this father composed many Homilies, and Admonitions, and works on Doctrine; and his voice was exceedingly sweet, and was filled with the grace of the Holy Spirit. And he sat upon his archiepiscopal throne forty years, and he was wellpleasing to God and died in peace. Salutation to Zachariah.

And on this day also Saint Onesimus, the priest, and the disciple of Paul the apostle, became a martyr. When Paul the apostle had preached in the city of Rome, Philemon departed from the city of Rome and took with him among his servants this Onesimus. And satan led him into error and corrupted his heart, and he stole money from his master Philemon and from other men like him; and when he knew that his master was going to punish him, he fled and came to the city of Rome. By the Will of God he came to the apostle, and heard his teaching, and his teaching entered his heart, and he believed through him, and the fear of God came into his heart. And he remembered what he had done, and how he had stolen money from his master and from others, and he had nothing of it left with him, which he could restore to them of their money. And he was sorry, and he came to Saint Paul and told him everything which had happened to him. And the apostle said unto him, “Fear not, neither let thy heart be sorrowful.” And he wrote an epistle unto Philemon his master; and this epistle is one of the Epistles of the Apostle Paul.

And Paul commanded him concerning Saint Onesimus, and he said unto him, “Protect him, for he hath become a disciple of Christ, and my son in the preaching of the Gospel.” And he commanded him concerning Onesimus, and said unto him, “Forgive him his sin in stealing thy money, and receive him as myself. And if he hath wronged thee in aught, and he ought to repay thee, set it to my account. I, Paul, have written it with mine own hand; howbeit I say not that thou art thyself in debt to me.” And when this Saint Onesimus came with the letter to his master Philemon, he rejoiced in his faith and repentance, and did to him even as the Apostle Paul had commanded him. And Philemon added to his great love for Onesimus, and he commanded [his steward to give] to him much money for him to take, and he would take nothing whatsoever of it, and he said, “I have become a rich man in Christ.” And when Philemon bade Onesimus farewell, and set him on his road, and Onesimus returned to the city of Rome, and ministered unto Paul, the Apostle, until the time of his martyrdom. And Paul praised this saint and made him a priest, and the Apostles praise him and mention him in the seventy-seventh Canon, and in the fifty-third Canon, and they say of him that he was a “faithful priest.” And after the martyrdom of the Apostle Paul, the captain of the host of the Emperor of Rome took this saint, and banished him to an island, and he dwelt there and taught the men the Faith of our Lord Jesus Christ. And they beat him severely and made him to suffer agony, and then they broke his thighs, and he departed to God. Salutation to Onesimus the disciple of Paul.

And on this day also died Abba ‘Akyos, and Abba Gabriel, Bishop of Ethiopia.