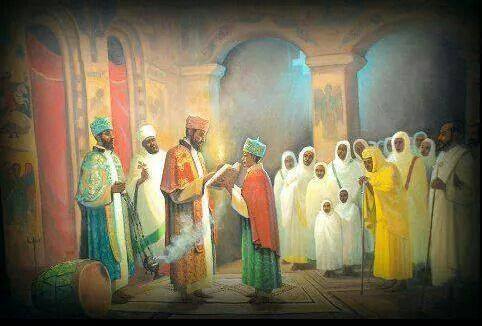 On this day saint Theodore, the Roman, became a martyr. This saint was from the city of ‘Astir, and he lived in the days of the infidel Emperors Maximus and Masabos, who heard that he did not agree with them in their infidelity. And they had him brought before them and commanded him to worship idols, and to sacrifice to them, but he would not obey them, and he said unto them, “I will not worship unclean idols, for I worship my Lord Jesus Christ, the son of the Living God, the Creator of the heavens, and the earth, and all that is therein.” Then they made him promises of many things, if he would worship their idols, but he neither accepted their promises, nor submitted to their words, and he cursed both them and their idols. And straightway they were wroth with him, and they commanded the soldiers to torture him with every kind of torture; and they tortured him on the wheel, and they cut off his limbs, and they burned him with fire, and then they beat him severely with whips, and he endured all these tortures through the might of our Lord Jesus Christ, which strengthened him. When they were tired of torturing him they cut off his head with the sword, and he received the crown of martyrdom in the kingdom of the heavens. Salutation to Theodore.

Salutation to Abraham, Isaac, and Jacob.

Salutation to the companions of Theodore, etc.