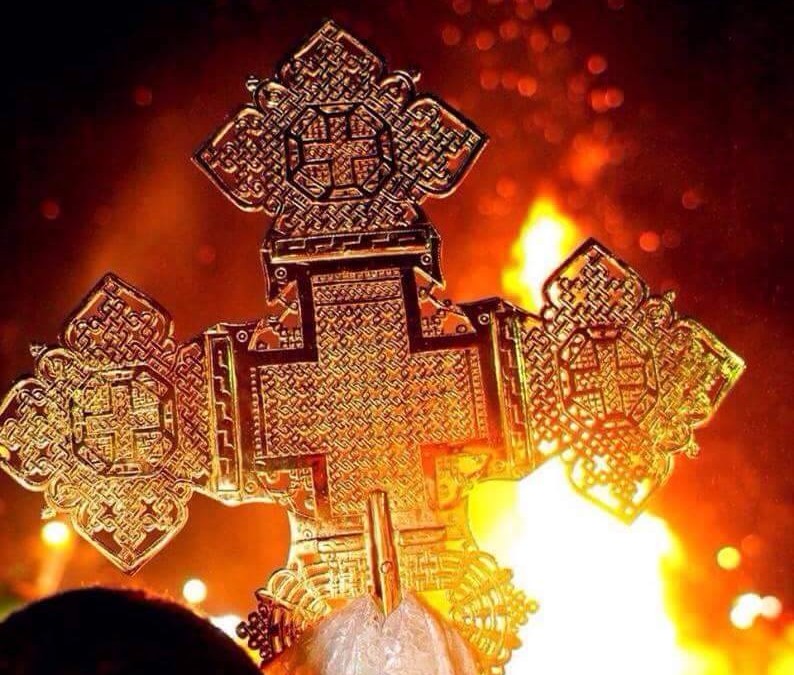 On this day was found the head of John the Baptist. Now Herod the infidel commanded the soldiers to cut off the head of the saint, and when they had cut it off, and brought it to him, he showed the people that he was sorry for what he had done to Saint John, and he left the holy head of Saint John in his house. And when Herod had put away the daughter of ‘Aorta and taken Herodias, his brother’s wife, the daughter of ‘Aorta came to her father, and she wept before him, and told him what Herod had done to her. And ‘Aorta rose up, and gathered together his soldiers, and he came to the country of Galilee, and plundered all their cities and burned them with fire. When the Emperor Tiberius Caesar heard this thing [he enquired] and the people told him that ‘Aorta had done this thing because Herod had put away his daughter. And Tiberius Caesar was wroth with Herod because he had killed the man who was held to be a great prophet by all the people of the cities, and had taken his brother’s wife, and because his father-in-law ‘Aorta had plundered and laid waste all the cities of Galilee. And Tiberius Caesar sent, and had Herod brought to him to the city of Rome, and Herodias with him, after he had buried the head of Saint John in his house. And when Herod came to Tiberius Caesar, the emperor removed him from his governorship, and seized all his money, and sent him to the country of ‘Andeles, where he died an evil death. And the emperor sent, and laid waste his house, and he made it visible to everyone who looked thereat; and his house was left a heap of waste, with the exception of the porch, which had no doors (?), and the pilgrims used to live there. And at that time two men who were poor in respect of money, but rich in the matter of the Faith, went to Jerusalem to worship, and to fast the Holy Fast (i.e. Lent). Now this took place many years later. And when the evening was come they went and dwelt in the ruined house of Herod, and Saint John appeared unto one of them in a dream, and told him his name, and the place wherein was his head; and he commanded him to take it and carry it to his house; when the man woke up from his dream, he told his companion what he had seen. And they rose up together, and came to that place which Saint John had pointed out to him, and they found a vessel therein. And when they had opened it, there ascended to them the odor of a perfume, which was very pleasant, and they found in it the holy head of Saint John, and they were blessed thereby. And they put it back into the vessel, and fastened up the mouth thereof, as it was at first, and the man took it with him to his house, and paid it very great honor, and kept a lamp burning before it continually. And when death drew nigh unto that man he told his sister about the holy head, and commanded her to treat it as he had done; and she paid honor to the holy head, and kept a lamp burning before it. And the head of Saint John was handed on from man to man, until at length it came to a certain man who was an Arian, and who thought that the head would perform miracles for him, although he was of the faith of Arius, the infidel. And Saint John raised up against him a man who was greater than he, and this man drove him away from that place, and that place lay waste until Abba Cyril was made Bishop of Jerusalem, and Abba Anianus Bishop of the city of Khamd. And Saint John appeared unto Abba Anianus during his sleep, and told him the place wherein was his holy head, and Abba Anianus went and fetched it up, as it were on this day, the thirtieth day of the month. And John, the Mouth of Gold (i.e. Chrysostom), saith something different to this, that is to say: When Herod commanded the soldiers, and they had cut off the head of the saint whilst he was in prison, they brought it to him, and he gave it to the daughter of Herodias on a platter. And when that unclean harlot touched it, the hair of the head stood up, and the holy head leaped up into the air, and was crying out and saying, “It is not right for thee to take thy brother’s wife,” and it continued to fly about like an eagle, and to utter these words for a period of fifteen years, when it ceased and was buried in the Sea of Arabia. And the pilgrims used to dwell in that place. And by the Will of God there came to that place two righteous and believing pilgrims, who were brothers, and they dwelt in that place. And Saint John appeared unto them, and told them to take up his holy head. Andthey took up his head from that place, and they carried it away with them to their house, and paid it great honor. Salutation to thy head, O Saint John.